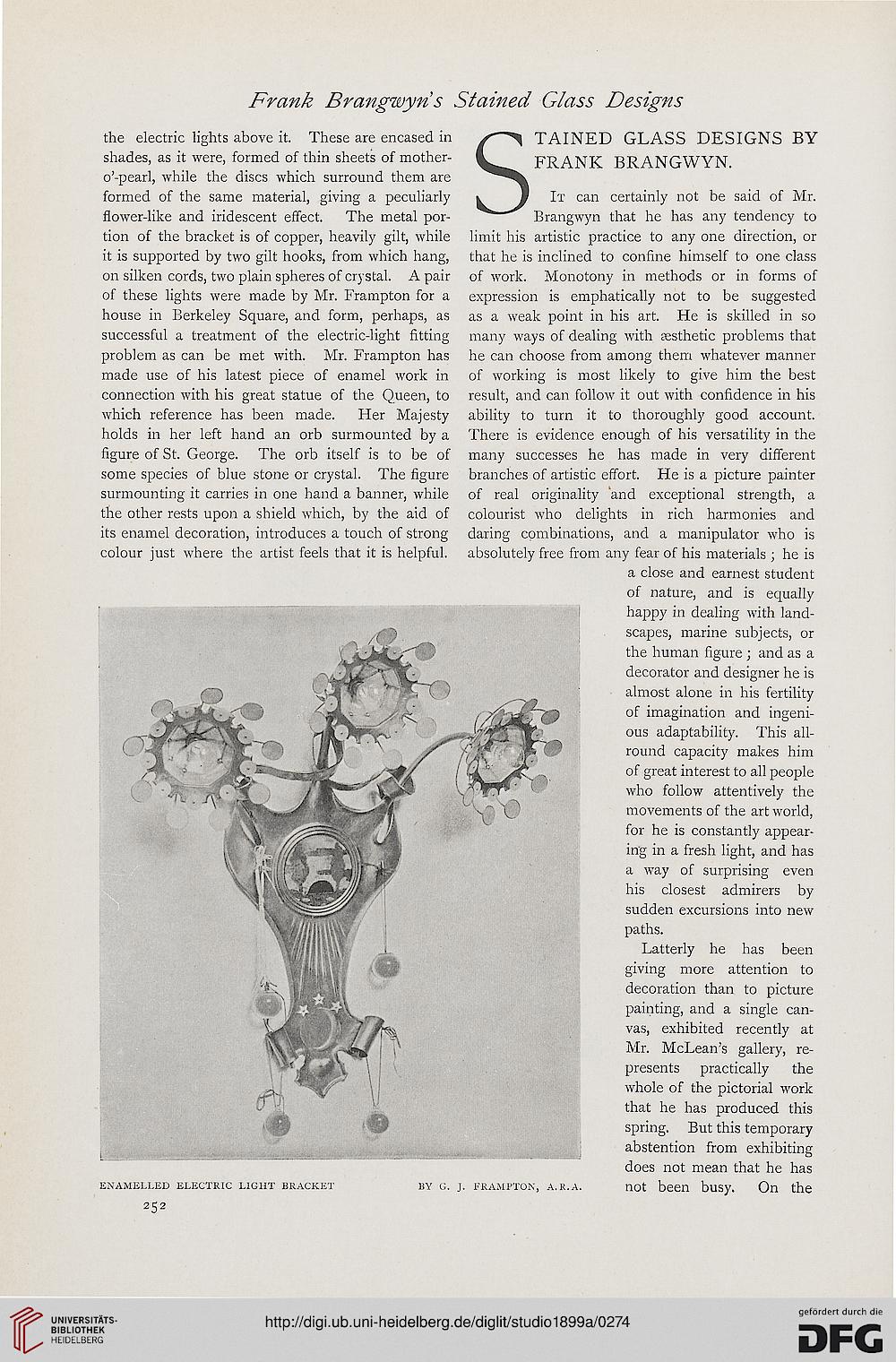 the electric lights above it. These are encased in TAINED GLASS DESIGNS BY

shades, as it were, formed of thin sheets of mother- 1 FRANK BRANGWYN

o'-pearl, while the discs which surround them are

formed of the same material, giving a peculiarly i W It can certainly not be said of Mr.
flower-like and iridescent effect. The metal por- ^^""^^ Brangwyn that he has any tendency to
tion of the bracket is of copper, heavily gilt, while limit his artistic practice to any one direction, or
it is supported by two gilt hooks, from which hang, that he is inclined to confine himself to one class
on silken cords, two plain spheres of crystal. A pair of work. Monotony in methods or in forms of
of these lights were made by Mr. Frampton for a expression is emphatically not to be suggested
house in Berkeley Square, and form, perhaps, as as a weak point in his art. He is skilled in so
successful a treatment of the electric-light fitting many ways of dealing with aesthetic problems that
problem as can be met with. Mr. Frampton has he can choose from among them whatever manner
made use of his latest piece of enamel work in of working is most likely to give him the best
connection with his great statue of the Queen, to result, and can follow it out with confidence in his
which reference has been made. Her Majesty ability to turn it to thoroughly good account,
holds in her left hand an orb surmounted by a There is evidence enough of his versatility in the
figure of St. George. The orb itself is to be of many successes he has made in very different
some species of blue stone or crystal. The figure branches of artistic effort. He is a picture painter
surmounting it carries in one hand a banner, while of real originality and exceptional strength, a
the other rests upon a shield which, by the aid of colourist who delights in rich harmonies and
its enamel decoration, introduces a touch of strong daring combinations, and a manipulator who is
colour just where the artist feels that it is helpful, absolutely free from any fear of his materials ; he is

a close and earnest student
of nature, and is equally
happy in dealing with land-
scapes, marine subjects, or
A^Jfv ' . the human figure ; and as a

decorator and designer he is

giving more attention to
' wHJKhSL painting, and a single can-

^ ^f^P whole of the pictorial work

that he has produced this
spring. But this temporary
J abstention from exhibiting
does not mean that he has

enamelled electric light bracket by g. j. frampton, a.r.a. not been busy. On the