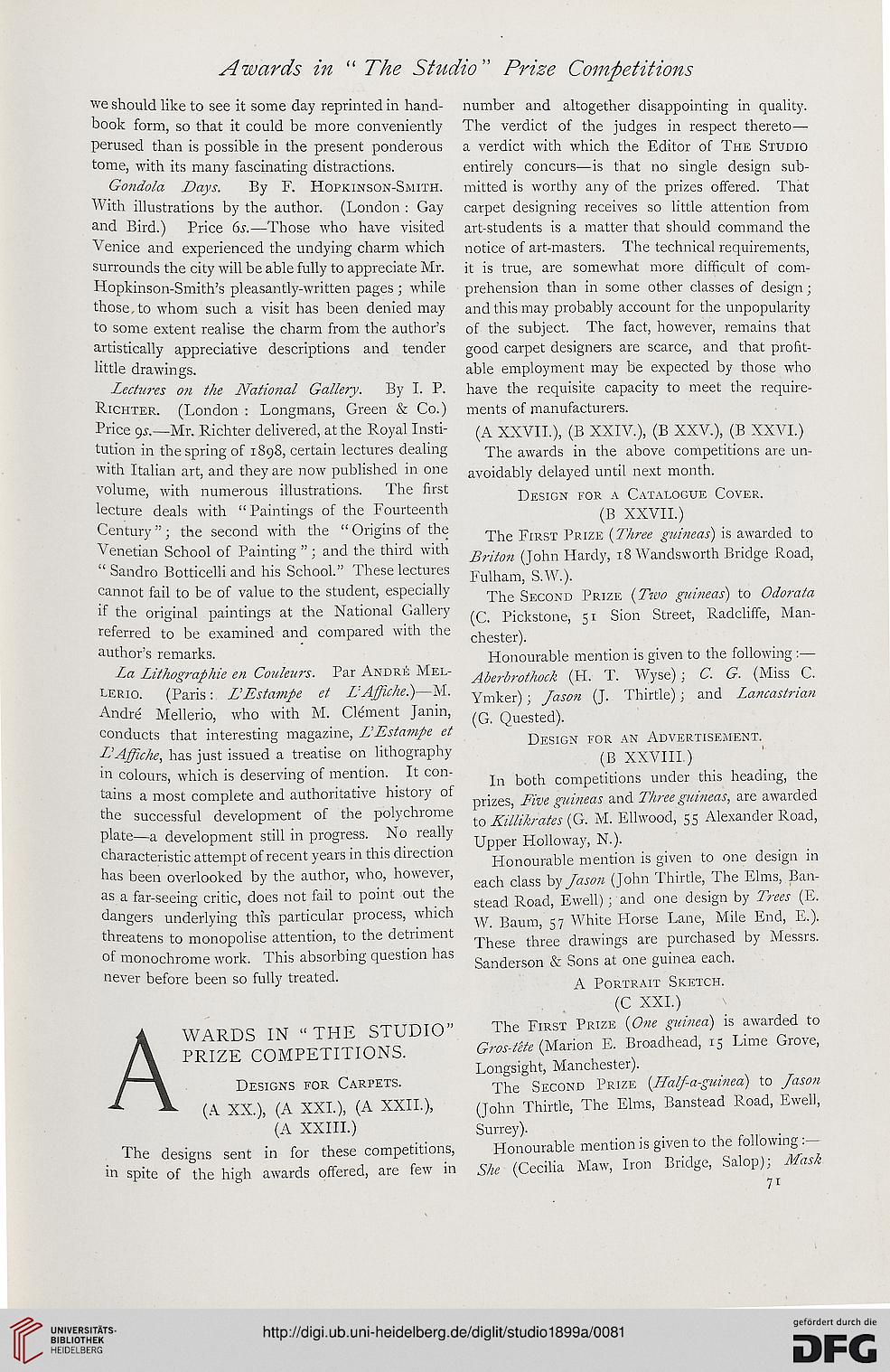 we should like to see it some day reprinted in hand- number and altogether disappointing in quality,
book form, so that it could be more conveniently The verdict of the judges in respect thereto-
perused than is possible in the present ponderous a verdict with which the Editor of The Studio
tome, with its many fascinating distractions. entirely concurs—is that no single design sub-

Gondola Days. By F. Hopkinson-Smith. mitted is worthy any of the prizes offered. That
With illustrations by the author. (London : Gay carpet designing receives so little attention from
and Bird.) Price 6s.—Those who have visited art-students is a matter that should command the
Venice and experienced the undying charm which notice of art-masters. The technical requirements,
surrounds the city will be able fully to appreciate Mr. it is true, are somewhat more difficult of com-
Hopkinson-Smith's pleasantly-written pages ; while prehension than in some other classes of design;
those, to whom such a visit has been denied may and this may probably account for the unpopularity
to some extent realise the charm from the author's of the subject. The fact, however, remains that
artistically appreciative descriptions and tender good carpet designers are scarce, and that profit-
little drawings. able employment may be expected by those who

Lectures on the National Gallery. By I. P. have the requisite capacity to meet the require-

tution in the spring of 1898, certain lectures dealing The awards in the above competitions are un-

with Italian art, and they are now published in one avoidably delayed until next month.

volume, with numerous illustrations. The first Design for a Catalogue Cover.

lecture deals with " Paintings of the Fourteenth ^ XXVII)

Century"; the second with the "Origins of the Thg FlRgT pRJZE {Three gu/neas) k awarded tQ

Sandro Botticelli and his School." These lectures jruinam 3 W )
cannot fail to be of value to the student, especially Thg sEC0ND pRIZE {Two guineas) to Odorata
if the original paintings at the National Gallery (Q pickstonC) $l sion Streetj Radcliffe, Man-
referred to be examined and compared with the cnester)

author's remarks. Honourable mention is given to the following :—

L'Affiche, has just issued a treatise on lithography ^ XXVIII )

in colours, which is deserving of mention. It con- ^ ^ competitions" under this heading, the

tains a most complete and authoritative history of ^ ^ ^ Threeguineas, are awarded

the successful development of the polychrome i0 xillikrates (G. M. Ellwood, 55 Alexander Road,

has been overlooked by the author, who, however, ^ ^ hy Jason (John Thirtk) The Elms> Ban.

as a far-seeing critic, does not fail to point out the Road; Ewd]) . and Qne design by Tms (E_

threatens to monopolise attention, to the detriment th'ree drawingg are purchased by Messrs.

of monochrome work. This absorbing question has ganderson & Sons at one guinea each,

never before been so fully treated. A PoRTRAIT Sketch.

The designs sent in for these competitions, Honourable mention is given to the following :-

in spite of the high awards offered, are few in She (Cecilia Maw, Iron Bridge, Salop); Mask