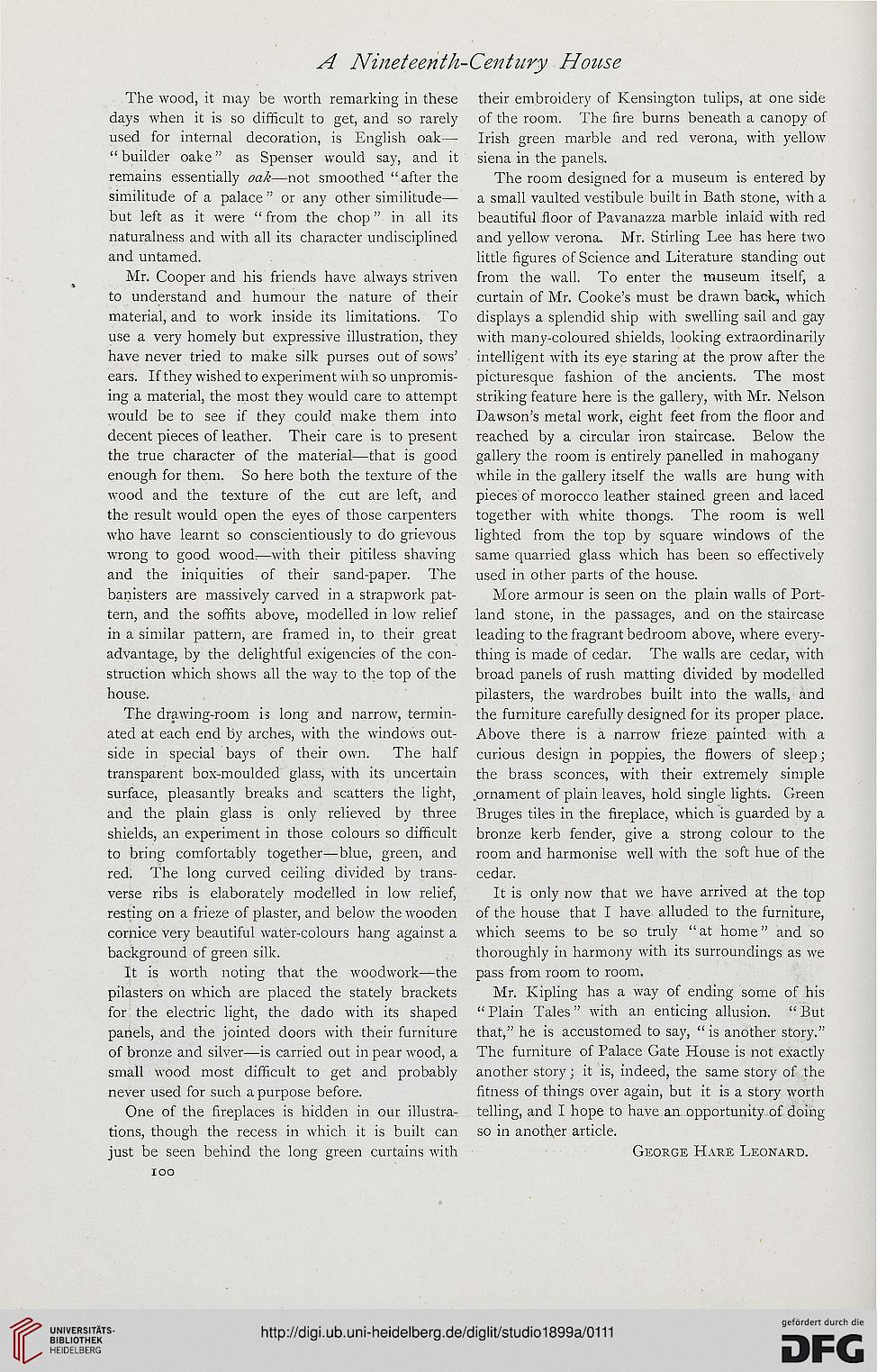 The wood, it may be worth remarking in these
days when it is so difficult to get, and so rarely
used for internal decoration, is English oak—
"builder oake" as Spenser would say, and it
remains essentially oak—not smoothed "after the
similitude of a palace " or any other similitude—
but left as it were " from the chop" in all its
naturalness and with all its character undisciplined
and untamed.

Mr. Cooper and his friends have always striven
to understand and humour the nature of their
material, and to work inside its limitations. To
use a very homely but expressive illustration, they
have never tried to make silk purses out of sows'
ears. If they wished to experiment with so unpromis-
ing a material, the most they would care to attempt
would be to see if they could make them into
decent pieces of leather. Their care is to present
the true character of the material—that is good
enough for them. So here both the texture of the
wood and the texture of the cut are left, and
the result would open the eyes of those carpenters
who have learnt so conscientiously to do grievous
wrong to good wood:—with their pitiless shaving
and the iniquities of their sand-paper. The
banisters are massively carved in a strapwork pat-
tern, and the soffits above, modelled in low relief
in a similar pattern, are framed in, to their great
advantage, by the delightful exigencies of the con-
struction which shows all the way to the top of the
house.

The drawing-room is long and narrow, termin-
ated at each end by arches, with the windows out-
side in special bays of their own. The half
transparent box-moulded glass, with its uncertain
surface, pleasantly breaks and scatters the light,
and the plain glass is only relieved by three
shields, an experiment in those colours so difficult
to bring comfortably together—blue, green, and
red. The long curved ceiling divided by trans-
verse ribs is elaborately modelled in low relief,
resting on a frieze of plaster, and below the wooden
cornice very beautiful water-colours hang against a
background of green silk.

It is worth noting that the woodwork—the
pilasters on which are placed the stately brackets
for the electric light, the dado with its shaped
panels, and the jointed doors with their furniture
of bronze and silver—is carried out in pear wood, a
small wood most difficult to get and probably
never used for such a purpose before.

One of the fireplaces is hidden in our illustra-
tions, though the recess in which it is built can
just be seen behind the long green curtains with
100

their embroidery of Kensington tulips, at one side
of the room. The fire burns beneath a canopy of
Irish green marble and red verona, with yellow
siena in the panels.

The room designed for a museum is entered by
a small vaulted vestibule built in Bath stone, with a
beautiful floor of Pavanazza marble inlaid with red
and yellow verona. Mr. Stirling Lee has here two
little figures of Science and Literature standing out
from the wall. To enter the museum itself, a
curtain of Mr. Cooke's must be drawn back, which
displays a splendid ship with swelling sail and gay
with many-coloured shields, looking extraordinarily
intelligent with its eye staring at the prow after the
picturesque fashion of the ancients. The most
striking feature here is the gallery, with Mr. Nelson
Dawson's metal work, eight feet from the floor and
reached by a circular iron staircase. Below the
gallery the room is entirely panelled in mahogany
while in the gallery itself the walls are hung with
pieces of morocco leather stained green and laced
together with white thongs. The room is well
lighted from the top by square windows of the
same quarried glass which has been so effectively
used in other parts of the house.

More armour is seen on the plain walls of Port-
land stone, in the passages, and on the staircase
leading to the fragrant bedroom above, where every-
thing is made of cedar. The walls are cedar, with
broad panels of rush matting divided by modelled
pilasters, the wardrobes built into the walls, and
the furniture carefully designed for its proper place.
Above there is a narrow frieze painted with a
curious design in poppies, the flowers of sleep;
the brass sconces, with their extremely simple
ornament of plain leaves, hold single lights. Green
Bruges tiles in the fireplace, which is guarded by a
bronze kerb fender, give a strong colour to the
room and harmonise well with the soft hue of the
cedar.

It is only now that we have arrived at the top
of the house that I have alluded to the furniture,
which seems to be so truly "at home" and so
thoroughly in harmony with its surroundings as we
pass from room to room.

Mr. Kipling has a way of ending some of his
"Plain Tales" with an enticing allusion. "But
that," he is accustomed to say, " is another story."
The furniture of Palace Gate House is not exactly
another story; it is, indeed, the same story of the
fitness of things over again, but it is a story worth
telling, and I hope to have an opportunity of doing
so in another article.