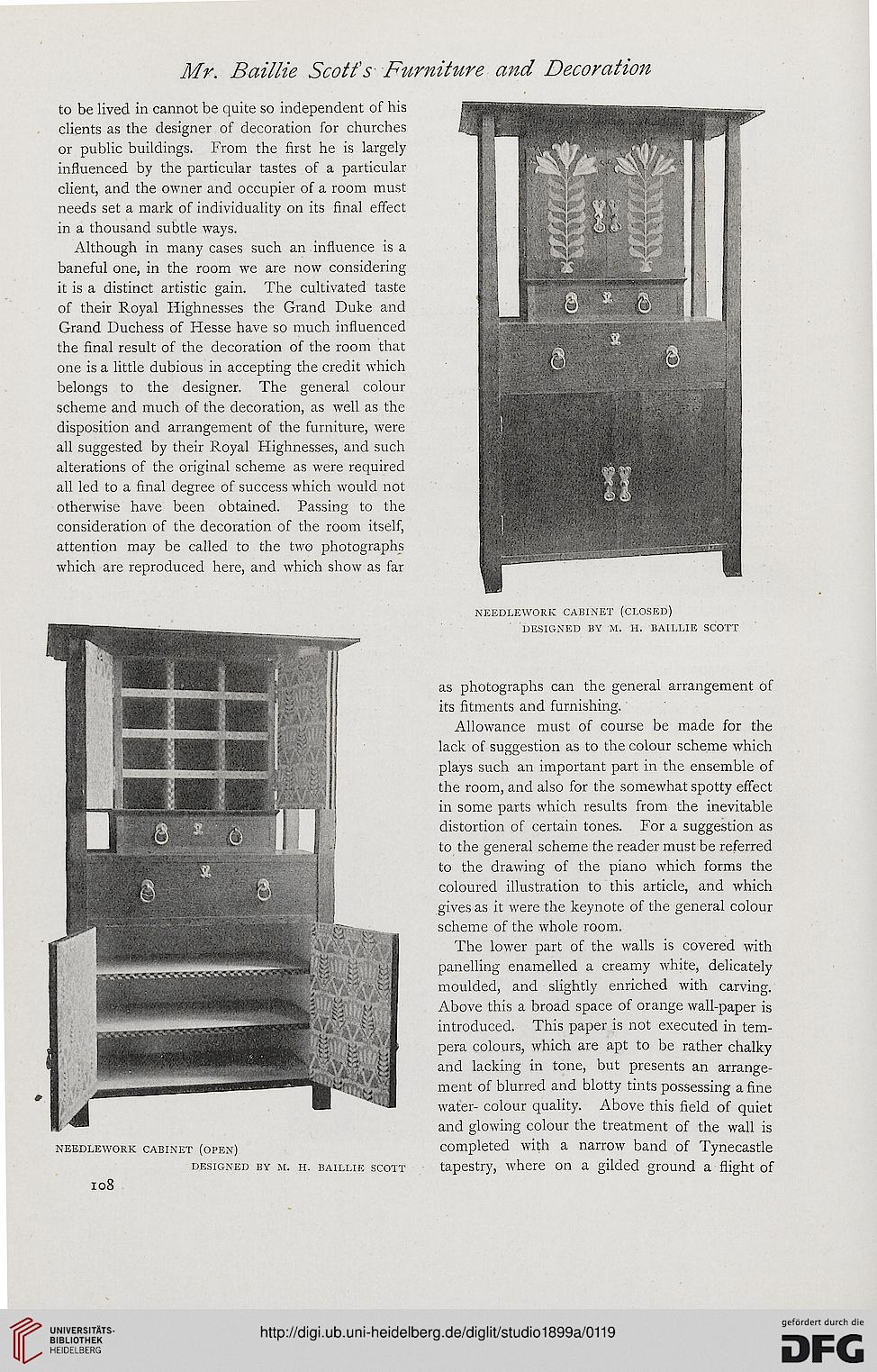 to be lived in cannot be quite so independent of his
clients as the designer of decoration for churches
or public buildings. From the first he is largely
influenced by the particular tastes of a particular
client, and the owner and occupier of a room must
needs set a mark of individuality on its final effect
in a thousand subtle ways.

Although in many cases such an influence is a
baneful one, in the room we are now considering
it is a distinct artistic gain. The cultivated taste
of their Royal Highnesses the Grand Duke and
Grand Duchess of Hesse have so much influenced
the final result of the decoration of the room that
one is a little dubious in accepting the credit which
belongs to the designer. The general colour
scheme and much of the decoration, as well as the
disposition and arrangement of the furniture, were
all suggested by their Royal Highnesses, and such
alterations of the original scheme as were required
all led to a final degree of success which would not
otherwise have been obtained. Passing to the
consideration of the decoration of the room itself,
attention may be called to the two photographs
which are reproduced here, and which show as far

as photographs can the general arrangement of
its fitments and furnishing.

Allowance must of course be made for the
lack of suggestion as to the colour scheme which
plays such an important part in the ensemble of
the room, and also for the somewhat spotty effect
in some parts which results from the inevitable
distortion of certain tones. For a suggestion as
to the general scheme the reader must be referred
to the drawing of the piano which forms the
coloured illustration to this article, and which
gives as it were the keynote of the general colour
scheme of the whole room.

The lower part of the walls is covered with
panelling enamelled a creamy white, delicately
moulded, and slightly enriched with carving.
Above this a broad space of orange wall-paper is
introduced. This paper is not executed in tem-
pera colours, which are apt to be rather chalky
and lacking in tone, but presents an arrange-
ment of blurred and blotty tints possessing a fine
water- colour quality. Above this field of quiet
and glowing colour the treatment of the wall is
completed with a narrow band of Tynecastle
tapestry, where on a gilded ground a flight of