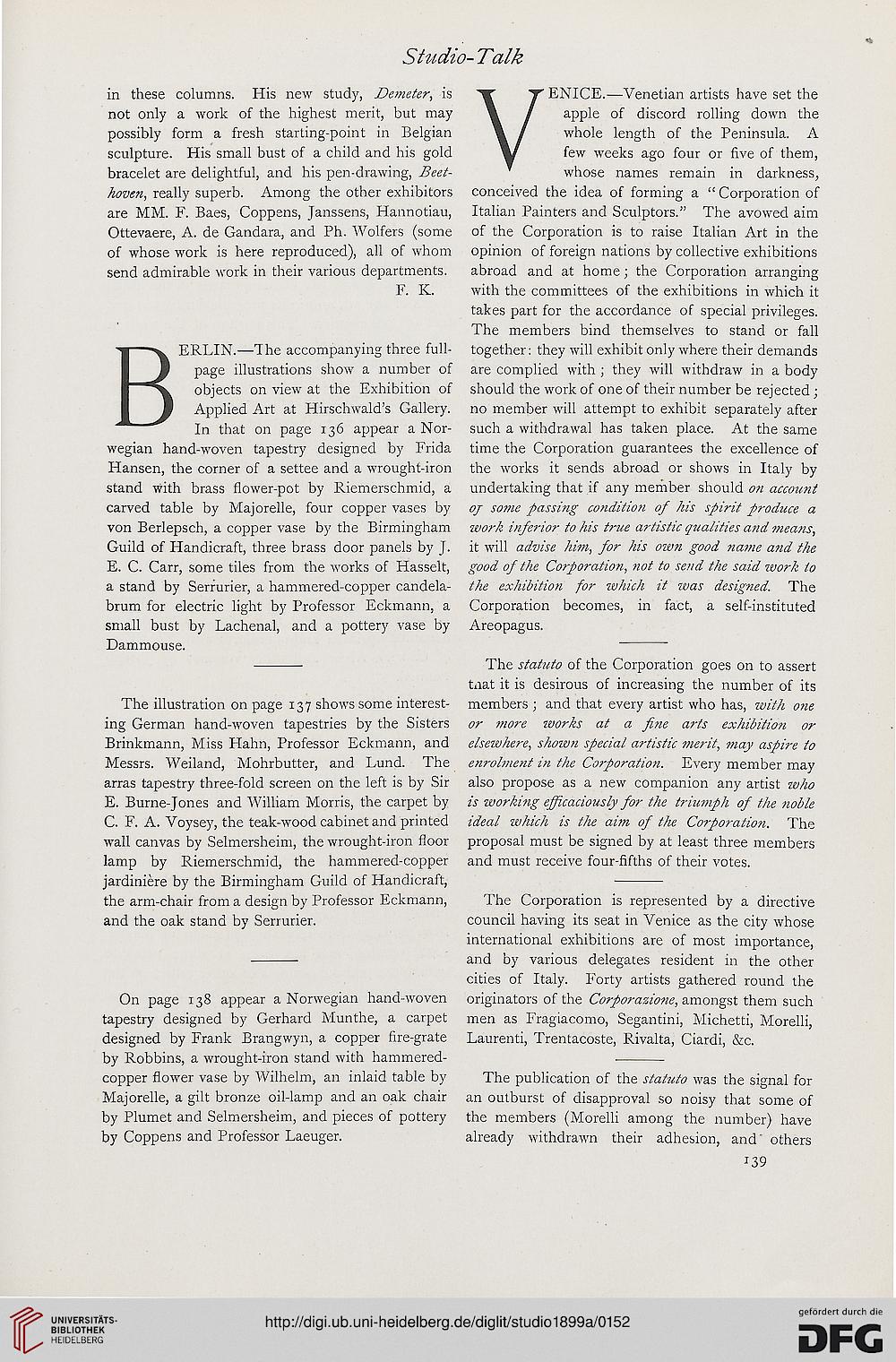 in these columns. His new study, JDemeter, is
not only a work of the highest merit, but may
possibly form a fresh starting-point in Belgian
sculpture. His small bust of a child and his gold
bracelet are delightful, and his pen-drawing, Beet-
hoven, really superb. Among the other exhibitors
are MM. F. Baes, Coppens, Janssens, Hannotiau,
Ottevaere, A. de Gandara, and Ph. Wolfers (some
of whose work is here reproduced), all of whom
send admirable work in their various departments.

BERLIN.—The accompanying three full-
page illustrations show a number of
objects on view at the Exhibition of
Applied Art at Hirschwald's Gallery.
In that on page 136 appear a Nor-
wegian hand-woven tapestry designed by Frida
Hansen, the corner of a settee and a wrought-iron
stand with brass flower-pot by Riemerschmid, a
carved table by Majorelle, four copper vases by
von Berlepsch, a copper vase by the Birmingham
Guild of Handicraft, three brass door panels by J.
E. C. Carr, some tiles from the works of Hasselt,
a stand by Serrurier, a hammered-copper candela-
brum for electric light by Professor Eckmann, a
small bust by Lachenal, and a pottery vase by
Dammouse.

The illustration on page 137 shows some interest-
ing German hand-woven tapestries by the Sisters
Brinkmann, Miss Hahn, Professor Eckmann, and
Messrs. Weiland, Mohrbutter, and Lund. The
arras tapestry three-fold screen on the left is by Sir
E. Burne-Jones and William Morris, the carpet by
C. F. A. Voysey, the teak-wood cabinet and printed
wall canvas by Selmersheim, the wrought-iron floor
lamp by Riemerschmid, the hammered-copper
jardiniere by the Birmingham Guild of Handicraft,
the arm-chair from a design by Professor Eckmann,
and the oak stand by Serrurier.

On page 138 appear a Norwegian hand-woven
tapestry designed by Gerhard Munthe, a carpet
designed by Frank Brangwyn, a copper fire-grate
by Robbins, a wrought-iron stand with hammered-
copper flower vase by Wilhelm, an inlaid table by
Majorelle, a gilt bronze oil-lamp and an oak chair
by Plumet and Selmersheim, and pieces of pottery
by Coppens and Professor Laeuger.

VENICE.—Venetian artists have set the
apple of discord rolling down the
whole length of the Peninsula. A
few weeks ago four or five of them,
whose names remain in darkness,
conceived the idea of forming a "Corporation of
Italian Painters and Sculptors." The avowed aim
of the Corporation is to raise Italian Art in the
opinion of foreign nations by collective exhibitions
abroad and at home; the Corporation arranging
with the committees of the exhibitions in which it
takes part for the accordance of special privileges.
The members bind themselves to stand or fall
together: they will exhibit only where their demands
are complied with ; they will withdraw in a body
should the work of one of their number be rejected ;
no member will attempt to exhibit separately after
such a withdrawal has taken place. At the same
time the Corporation guarantees the excellence of
the works it sends abroad or shows in Italy by
undertaking that if any member should on account
oj some passing condition of his spirit produce a
work inferior to his true artistic qualities and means,
it will advise him, for his own good na7ne and the
good of the Corporation, not to send the said work to
t/ie exhibition for which it was designed. The
Corporation becomes, in fact, a self-instituted
Areopagus.

The statuto of the Corporation goes on to assert
tnat it is desirous of increasing the number of its
members ; and that every artist who has, ivith one
or more ivorks at a fine arts exhibition or
elsewhere, shown special artistic merit, may aspire to
enrolment in the Corporation. Every member may
also propose as a new companion any artist who
is working efficaciously for the trimnph of the noble
ideal zvhich is the aim of the Corporation. The
proposal must be signed by at least three members
and must receive four-fifths of their votes.

The Corporation is represented by a directive
council having its seat in Venice as the city whose
international exhibitions are of most importance,
and by various delegates resident in the other
cities of Italy. Forty artists gathered round the
originators of the Corporazione, amongst them such
men as Fragiacomo, Segantini, Michetti, Morelli,
Laurenti, Trentacoste, Rivalta, Ciardi, &c.

The publication of the statuto was the signal for
an outburst of disapproval so noisy that some of
the members (Morelli among the number) have
already withdrawn their adhesion, and others