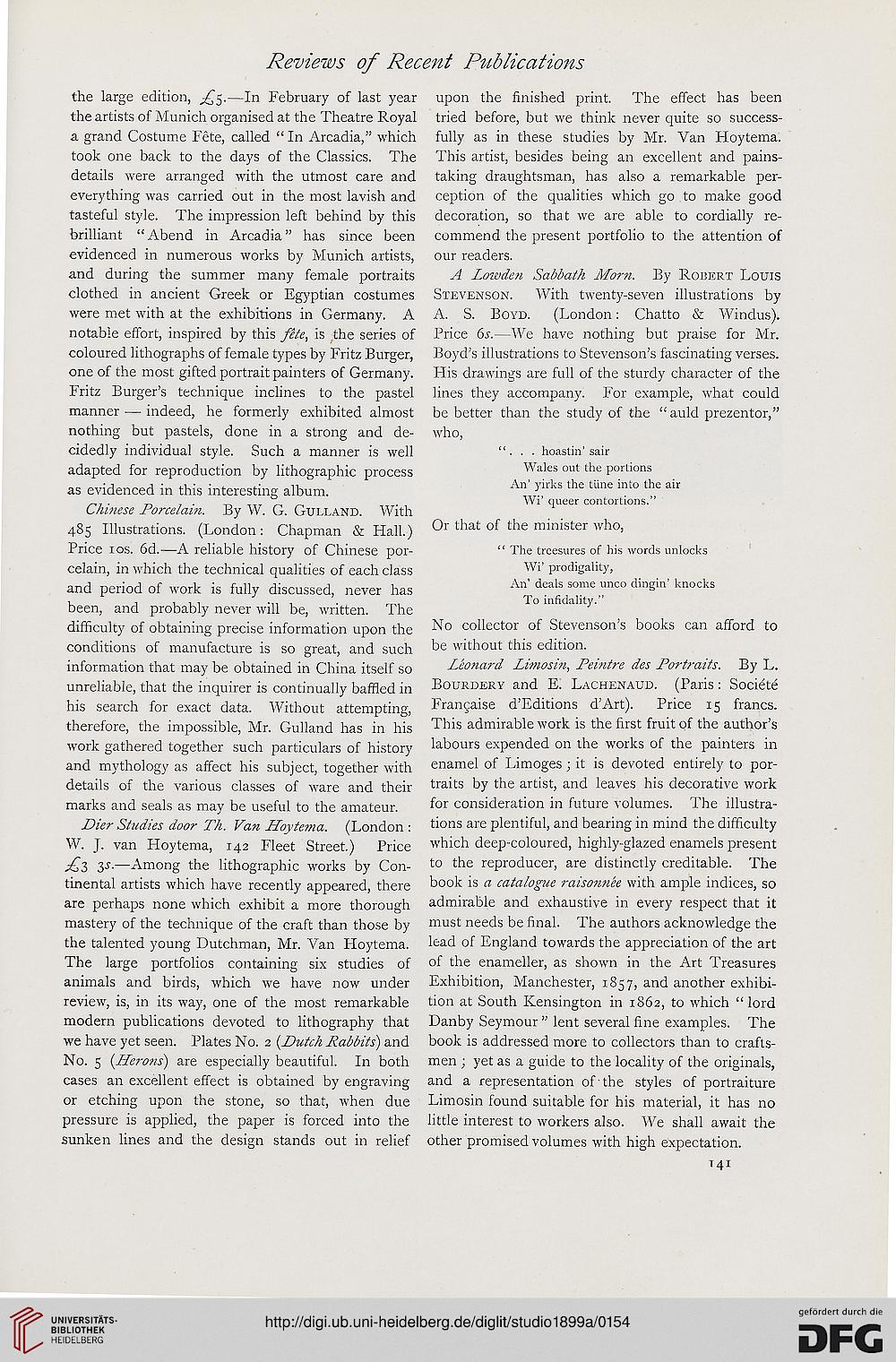 the large edition, ^5.—In February of last year
the artists of Munich organised at the Theatre Royal
a grand Costume Fete, called " In Arcadia," which
took one back to the days of the Classics. The
details were arranged with the utmost care and
everything was carried out in the most lavish and
tasteful style. The impression left behind by this
brilliant " Abend in Arcadia" has since been
evidenced in numerous works by Munich artists,
and during the summer many female portraits
clothed in ancient Greek or Egyptian costumes
were met with at the exhibitions in Germany. A
notable effort, inspired by this fete, is the series of
coloured lithographs of female types by Fritz Burger,
one of the most gifted portrait painters of Germany.
Fritz Burger's technique inclines to the pastel
manner — indeed, he formerly exhibited almost
nothing but pastels, done in a strong and de-
cidedly individual style. Such a manner is well
adapted for reproduction by lithographic process
as evidenced in this interesting album.

Chinese Porcelain. By W. G. Gulland. With
485 Illustrations. (London: Chapman & Hall.)
Price 1 os. 6d.—A reliable history of Chinese por-
celain, in which the technical qualities of each class
and period of work is fully discussed, never has
been, and probably never will be, written. The
difficulty of obtaining precise information upon the
conditions of manufacture is so great, and such
information that may be obtained in China itself so
unreliable, that the inquirer is continually baffled in
his search for exact data. Without attempting,
therefore, the impossible, Mr. Gulland has in his
work gathered together such particulars of history
and mythology as affect his subject, together with
details of the various classes of ware and their
marks and seals as may be useful to the amateur.

Dier Studies door Th. Van Hoytema. (London :
W. J. van Hoytema, 142 Fleet Street.) Price
£z 3s-—Among the lithographic works by Con-
tinental artists which have recently appeared, there
are perhaps none which exhibit a more thorough
mastery of the technique of the craft than those by
the talented young Dutchman, Mr. Van Hoytema.
The large portfolios containing six studies of
animals and birds, which we have now under
review, is, in its way, one of the most remarkable
modern publications devoted to lithography that
we have yet seen. Plates No. 2 {Dutch Rabbits) and
No. 5 {Herons) are especially beautiful. In both
cases an excellent effect is obtained by engraving
or etching upon the stone, so that, when due
pressure is applied, the paper is forced into the
sunken lines and the design stands out in relief

upon the finished print. The effect has been
tried before, but we think never quite so success-
fully as in these studies by Mr. Van Hoytema.
This artist, besides being an excellent and pains-
taking draughtsman, has also a remarkable per-
ception of the qualities which go to make good
decoration, so that we are able to cordially re-
commend the present portfolio to the attention of
our readers.

A Lowden Sabbath Morn. By Robert Louis
Stevenson. With twenty-seven illustrations by
A. S. Boyd. (London: Chatto & Windus).
Price 6s.—We have nothing but praise for Mr.
Boyd's illustrations to Stevenson's fascinating verses.
His drawings are full of the sturdy character of the
lines they accompany. For example, what could
be better than the study of the " auld prezentor,"
who,

Wales out the portions
An' yirks the tiine into the air
Wi' queer contortions."

Or that of the minister who,

'' The treesures of his words unlocks
Wi' prodigality,
An* deals some unco dingin' knocks
To infidality."

No collector of Stevenson's books can afford to
be without this edition.

Leonard Limosin, Peititre des Portraits. By L.
Bourdery and E. Lachenaud. (Paris: Societe
Francaise d'Editions d'Art). Price 15 francs.
This admirable work is the first fruit of the author's
labours expended on the works of the painters in
enamel of Limoges ; it is devoted entirely to por-
traits by the artist, and leaves his decorative work
for consideration in future volumes. The illustra-
tions are plentiful, and bearing in mind the difficulty
which deep-coloured, highly-glazed enamels present
to the reproducer, are distinctly creditable. The
book is a catalogue raisonnee with ample indices, so
admirable and exhaustive in every respect that it
must needs be final. The authors acknowledge the
lead of England towards the appreciation of the art
of the enameller, as shown in the Art Treasures
Exhibition, Manchester, 1857, and another exhibi-
tion at South Kensington in 1862, to which "lord
Danby Seymour " lent several fine examples. The
book is addressed more to collectors than to crafts-
men ; yet as a guide to the locality of the originals,
and a representation of the styles of portraiture
Limosin found suitable for his material, it has no
little interest to workers also. We shall await the
other promised volumes with high expectation.