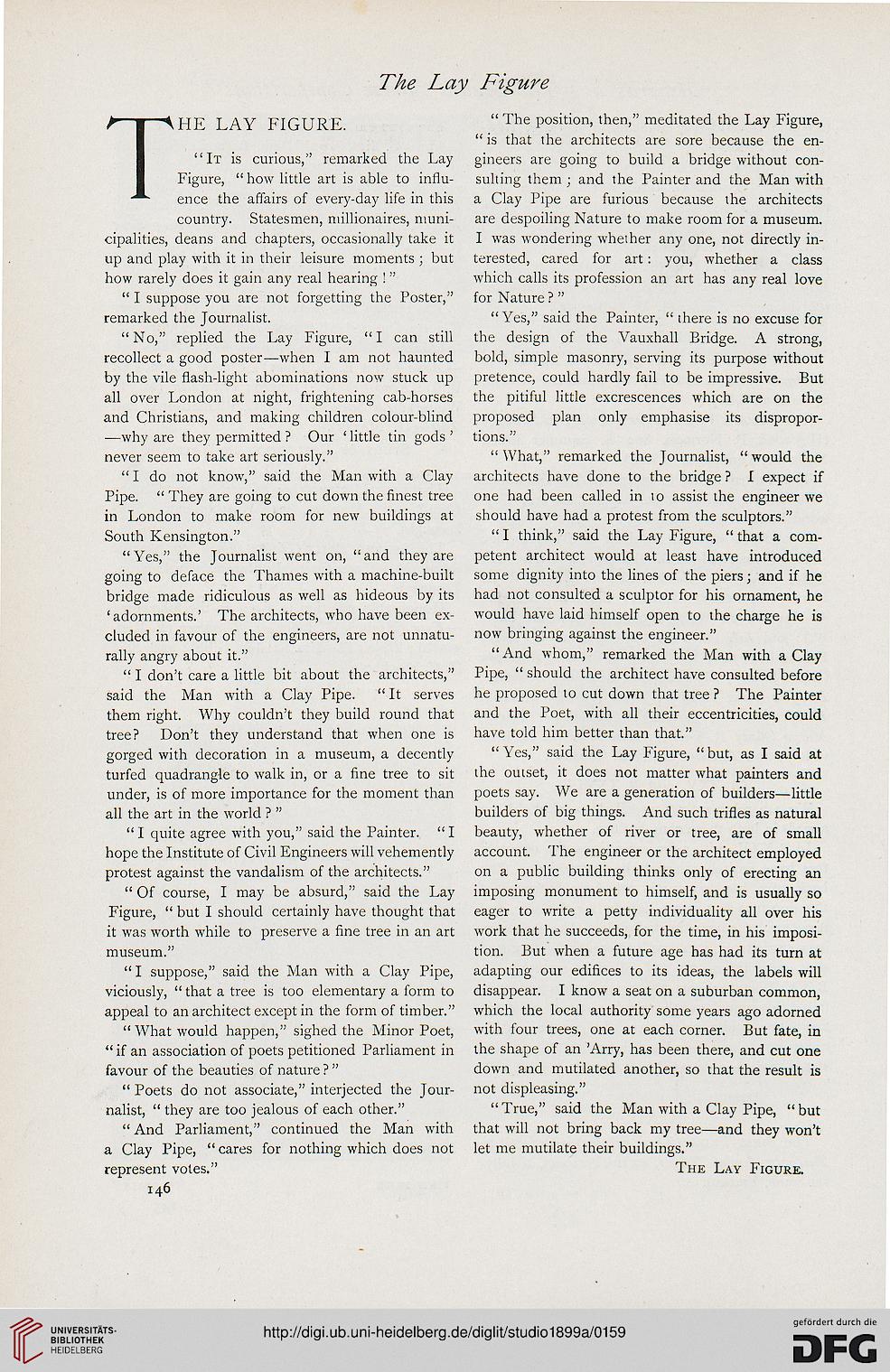 "It is curious," remarked the Lay
Figure, " how little art is able to influ-
ence the affairs of every-day life in this

country. Statesmen, millionaires, muni-
cipalities, deans and chapters, occasionally take it
up and play with it in their leisure moments ; but
how rarely does it gain any real hearing !"

" I suppose you are not forgetting the Poster,"
remarked the Journalist.

" No," replied the Lay Figure, " I can still
recollect a good poster—when I am not haunted
by the vile flash-light abominations now stuck up
all over London at night, frightening cab-horses
and Christians, and making children colour-blind
—why are they permitted ? Our ' little tin gods '
never seem to take art seriously."

"I do not know," said the Man with a Clay
Pipe. " They are going to cut down the finest tree
in London to make room for new buildings at
South Kensington."

"Yes," the Journalist went on, "and they are
going to deface the Thames with a machine-built
bridge made ridiculous as well as hideous by its
'adornments.' The architects, who have been ex-
cluded in favour of the engineers, are not unnatu-
rally angry about it."

" I don't care a little bit about the architects,"
said the Man with a Clay Pipe. " It serves
them right. Why couldn't they build round that
tree? Don't they understand that when one is
gorged with decoration in a museum, a decently
turfed quadrangle to walk in, or a fine tree to sit
under, is of more importance for the moment than
all the art in the world ? "

" I quite agree with you," said the Painter. " I
hope the Institute of Civil Engineers will vehemently
protest against the vandalism of the architects."

" Of course, I may be absurd," said the Lay
Figure, " but I should certainly have thought that
it was worth while to preserve a fine tree in an art
museum."

" I suppose," said the Man with a Clay Pipe,
viciously, " that a tree is too elementary a form to
appeal to an architect except in the form of timber."

"What would happen," sighed the Minor Poet,
" if an association of poets petitioned Parliament in
favour of the beauties of nature ? "

" Poets do not associate," interjected the Jour-
nalist, " they are too jealous of each other."

" And Parliament," continued the Man with
a Clay Pipe, " cares for nothing which does not
represent voles."
146

" The position, then," meditated the Lay Figure,
" is that the architects are sore because the en-
gineers are going to build a bridge without con-
sulting them ; and the Painter and the Man with
a Clay Pipe are furious because the architects
are despoiling Nature to make room for a museum.
I was wondering whether any one, not directly in-
terested, cared for art: you, whether a class
which calls its profession an art has any real love
for Nature ? "

"Yes," said the Painter, " there is no excuse for
the design of the Vauxhall Bridge. A strong,
bold, simple masonry, serving its purpose without
pretence, could hardly fail to be impressive. But
the pitiful little excrescences which are on the
proposed plan only emphasise its dispropor-
tions."

" What," remarked the Journalist, " would the
architects have done to the bridge ? I expect if
one had been called in to assist the engineer we
should have had a protest from the sculptors."

" I think," said the Lay Figure, " that a com-
petent architect would at least have introduced
some dignity into the lines of the piers; and if he
had not consulted a sculptor for his ornament, he
would have laid himself open to the charge he is
now bringing against the engineer."

" And whom," remarked the Man with a Clay
Pipe, " should the architect have consulted before
he proposed to cut down that tree ? The Painter
and the Poet, with all their eccentricities, could
have told him better than that."

"Yes," said the Lay Figure, "but, as I said at
the outset, it does not matter what painters and
poets say. We are a generation of builders—little
builders of big things. And such trifles as natural
beauty, whether of river or tree, are of small
account. The engineer or the architect employed
on a public building thinks only of erecting an
imposing monument to himself, and is usually so
eager to write a petty individuality all over his
work that he succeeds, for the time, in his imposi-
tion. But when a future age has had its turn at
adapting our edifices to its ideas, the labels will
disappear. I know a seat on a suburban common,
which the local authority some years ago adorned
with four trees, one at each corner. But fate, in
the shape of an 'Arry, has been there, and cut one
down and mutilated another, so that the result is
not displeasing."

" True," said the Man with a Clay Pipe, " but
that will not bring back my tree—and they won't
let me mutilate their buildings."