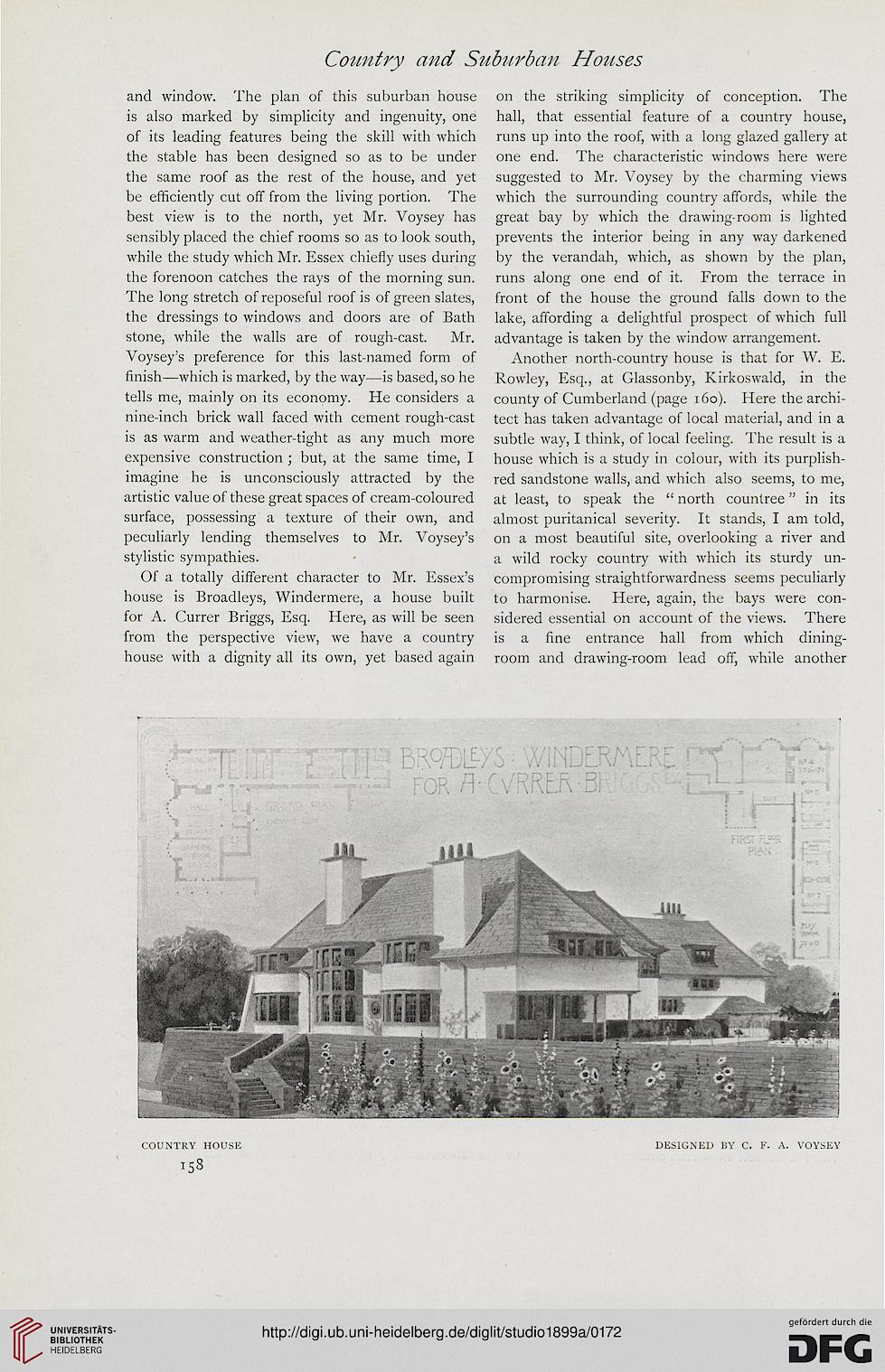 and window. The plan of this suburban house on the striking simplicity of conception. The

is also marked by simplicity and ingenuity, one hall, that essential feature of a country house,

of its leading features being the skill with which runs up into the roof, with a long glazed gallery at

the stable has been designed so as to be under one end. The characteristic windows here were

the same roof as the rest of the house, and yet suggested to Mr. Voysey by the charming views

be efficiently cut off from the living portion. The which the surrounding country affords, while the

best view is to the north, yet Mr. Voysey has great bay by which the drawing-room is lighted

sensibly placed the chief rooms so as to look south, prevents the interior being in any way darkened

while the study which Mr. Essex chiefly uses during by the verandah, which, as shown by the plan,

the forenoon catches the rays of the morning sun. runs along one end of it. From the terrace in

The long stretch of reposeful roof is of green slates, front of the house the ground falls down to the

the dressings to windows and doors are of Bath lake, affording a delightful prospect of which full

stone, while the walls are of rough-cast. Mr. advantage is taken by the window arrangement.
Voysey's preference for this last-named form of Another north-country house is that for W. E.

finish—which is marked, by the way—is based, so he Rowley, Esq., at Glassonby, Kirkoswald, in the

tells me, mainly on its economy. He considers a county of Cumberland (page 160). Here the archi-

nine-inch brick wall faced with cement rough-cast tect has taken advantage of local material, and in a

is as warm and weather-tight as any much more subtle way, I think, of local feeling. The result is a

expensive construction ; but, at the same time, I house which is a study in colour, with its purplish-

imagine he is unconsciously attracted by the red sandstone walls, and which also seems, to me,

artistic value of these great spaces of cream-coloured at least, to speak the " north countree " in its

surface, possessing a texture of their own, and almost puritanical severity. It stands, I am told,

peculiarly lending themselves to Mr. Voysey's on a most beautiful site, overlooking a river and

stylistic sympathies. a wild rocky country with which its sturdy un-

house is Broadleys, Windermere, a house built to harmonise. Here, again, the bays were con-

for A. Currer Briggs, Esq. Here, as will be seen sidered essential on account of the views. There

from the perspective view, we have a country is a fine entrance hall from which dining-

house with a dignity all its own, yet based again room and drawing-room lead off, while another