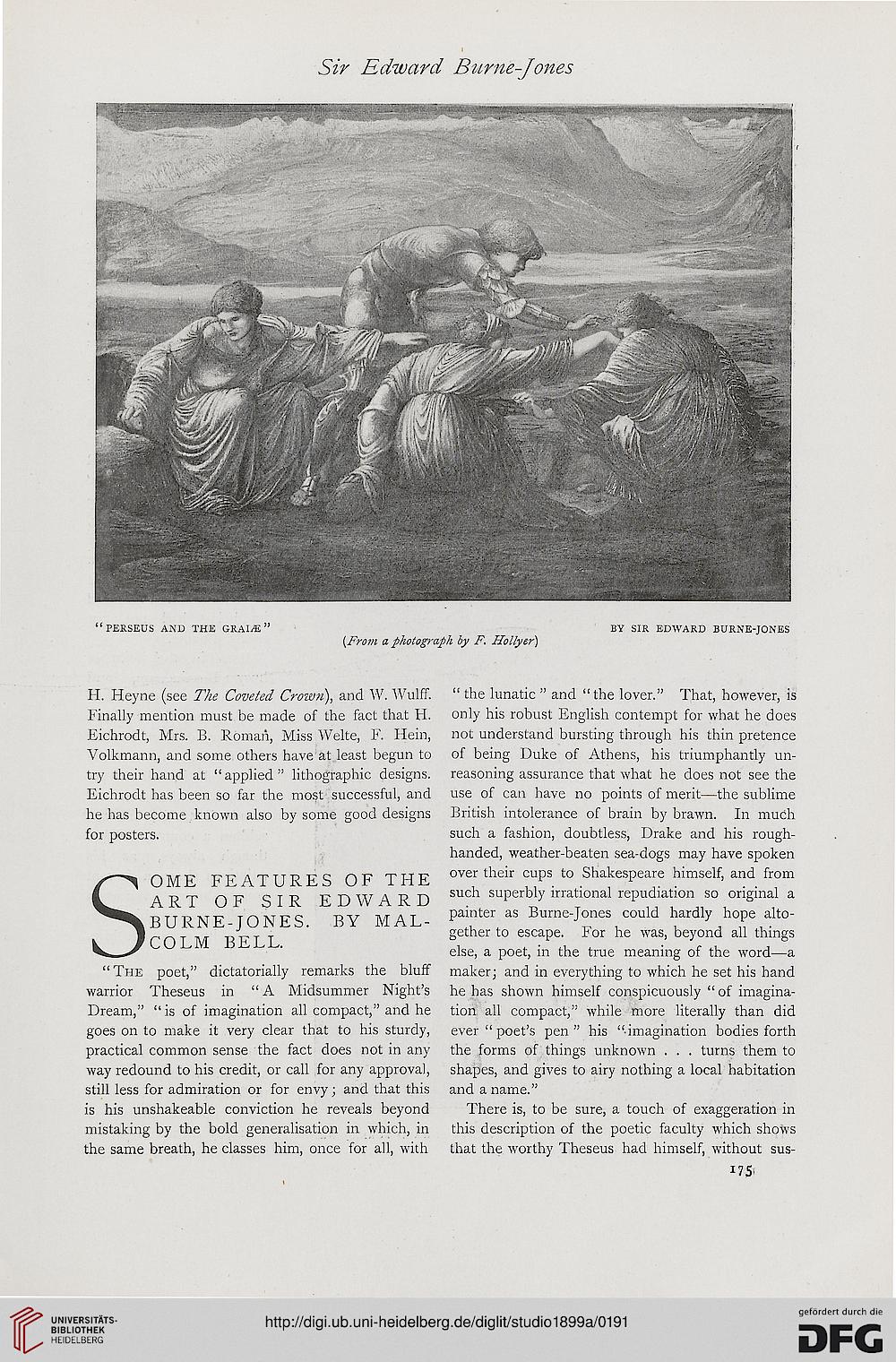 PERSEUS AND THE GRAI^E ' BY SIR EDWARD BURNE-JONES

{From a photograph by F. Hollyer)

H. Heyne (see The Coveted Crown), and W. Wulff.
Finally mention must be made of the fact that H.
Eichrodt, Mrs. B. Roman, Miss Welte, F. Hein,
Volkmann, and some others have at least begun to
try their hand at "applied" lithographic designs.
Eichrodt has been so far the most successful, and
he has become known also by some good designs
for posters.

SOME FEATURES OF THE
ART OF SIR EDWARD
BURNE-JONES. BY MAL-
COLM BELL.

"The poet," dictatorially remarks the bluff
warrior Theseus in " A Midsummer Night's
Dream," "is of imagination all compact," and he
goes on to make it very clear that to his sturdy,
practical common sense the fact does not in any
way redound to his credit, or call for any approval,
still less for admiration or for envy; and that this
is his unshakeable conviction he reveals beyond
mistaking by the bold generalisation in which, in
the same breath, he classes him, once for all, with

" the lunatic " and "the lover." That, however, is
only his robust English contempt for what he does
not understand bursting through his thin pretence
of being Duke of Athens, his triumphantly un-
reasoning assurance that what he does not see the
use of can have no points of merit—the sublime
British intolerance of brain by brawn. In much
such a fashion, doubtless, Drake and his rough-
handed, weather-beaten sea-dogs may have spoken
over their cups to Shakespeare himself, and from
such superbly irrational repudiation so original a
painter as Burne-Jones could hardly hope alto-
gether to escape. For he was, beyond all things
else, a poet, in the true meaning of the word—a
maker; and in everything to which he set his hand
he has shown himself conspicuously " of imagina-
tion all compact," while more literally than did
ever " poet's pen" his "imagination bodies forth
the forms of things unknown . . . turns them to
shapes, and gives to airy nothing a local habitation
and a name."

There is, to be sure, a touch of exaggeration in
this description of the poetic faculty which shows
that the worthy Theseus had himself, without sus-