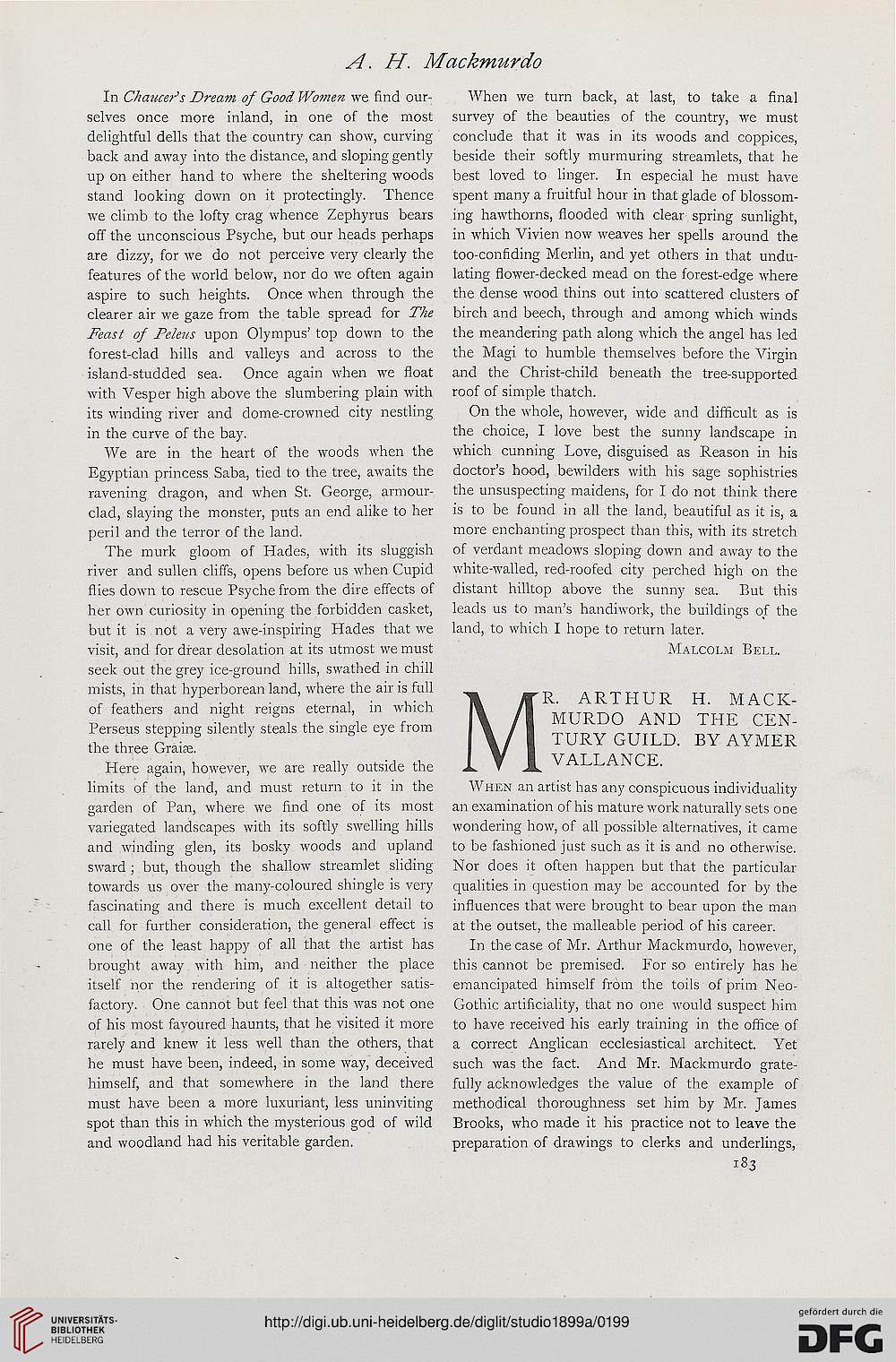 In Chaucer's Dream of Good Wotnen we find our-
selves once more inland, in one of the most
delightful dells that the country can show, curving
back and away into the distance, and sloping gently
up on either hand to where the sheltering woods
stand looking down on it protectingly. Thence
we climb to the lofty crag whence Zephyrus bears
off the unconscious Psyche, but our heads perhaps
are dizzy, for we do not perceive very clearly the
features of the world below, nor do we often again
aspire to such heights. Once when through the
clearer air we gaze from the table spread for The
Feast of Pelens upon Olympus' top down to the
forest-clad hills and valleys and across to the
island-studded sea. Once again when we float
with Vesper high above the slumbering plain with
its winding river and dome-crowned city nestling
in the curve of the bay.

We are in the heart of the woods when the
Egyptian princess Saba, tied to the tree, awaits the
ravening dragon, and when St. George, armour-
clad, slaying the monster, puts an end alike to her
peril and the terror of the land.

The murk gloom of Hades, with its sluggish
river and sullen cliffs, opens before us when Cupid
flies down to rescue Psyche from the dive effects of
her own curiosity in opening the forbidden casket,
but it is not a very awe-inspiring Hades that we
visit, and for drear desolation at its utmost we must
seek out the grey ice-ground hills, swathed in chill
mists, in that hyperborean land, where the air is full
of feathers and night reigns eternal, in which
Perseus stepping silently steals the single eye from
the three Graia?.

Here again, however, we are really outside the
limits of the land, and must return to it in the
garden of Pan, where we find one of its most
variegated landscapes with its softly swelling hills
and winding glen, its bosky woods and upland
sward ; but, though the shallow streamlet sliding
towards us over the many-coloured shingle is very
fascinating and there is much excellent detail to
call for further consideration, the general effect is
one of the least happy of all that the artist has
brought away with him, and neither the place
itself nor the rendering of it is altogether satis-
factory. One cannot but feel that this was not one
of his most favoured haunts, that he visited it more
rarely and knew it less well than the others, that
he must have been, indeed, in some way, deceived
himself, and that somewhere in the land there
must have been a more luxuriant, less uninviting
spot than this in which the mysterious god of wild
and woodland had his veritable garden.

When we turn back, at last, to take a final
survey of the beauties of the country, we must
conclude that it was in its woods and coppices,
beside their softly murmuring streamlets, that he
best loved to linger. In especial he must have
spent many a fruitful hour in that glade of blossom-
ing hawthorns, flooded with clear spring sunlight,
in which Vivien now weaves her spells around the
too-confiding Merlin, and yet others in that undu-
lating flower-decked mead on the forest-edge where
the dense wood thins out into scattered clusters of
birch and beech, through and among which winds
the meandering path along which the angel has led
the Magi to humble themselves before the Virgin
and the Christ-child beneath the tree-supported
roof of simple thatch.

On the whole, however, wide and difficult as is
the choice, I love best the sunny landscape in
which cunning Love, disguised as Reason in his
doctor's hood, bewilders with his sage sophistries
the unsuspecting maidens, for I do not think there
is to be found in all the land, beautiful as it is, a
more enchanting prospect than this, with its stretch
of verdant meadows sloping down and away to the
white-walled, red-roofed city perched high on the
distant hilltop above the sunny sea. But this
leads us to man's handiwork, the buildings of the
land, to which I hope to return later.

When an artist has any conspicuous individuality
an examination of his mature work naturally sets one
wondering how, of all possible alternatives, it came
to be fashioned just such as it is and no otherwise.
Nor does it often happen but that the particular
qualities in question may be accounted for by the
influences that were brought to bear upon the man
at the outset, the malleable period of his career.

In the case of Mr. Arthur Mackmurdo, however,
this cannot be premised. For so entirely has he
emancipated himself from the toils of prim Neo-
Gothic artificiality, that no one would suspect him
to have received his early training in the office of
a correct Anglican ecclesiastical architect. Yet
such was the fact. And Mr. Mackmurdo grate-
fully acknowledges the value of the example of
methodical thoroughness set him by Mr. James
Brooks, who made it his practice not to leave the
preparation of drawings to clerks and underlings,