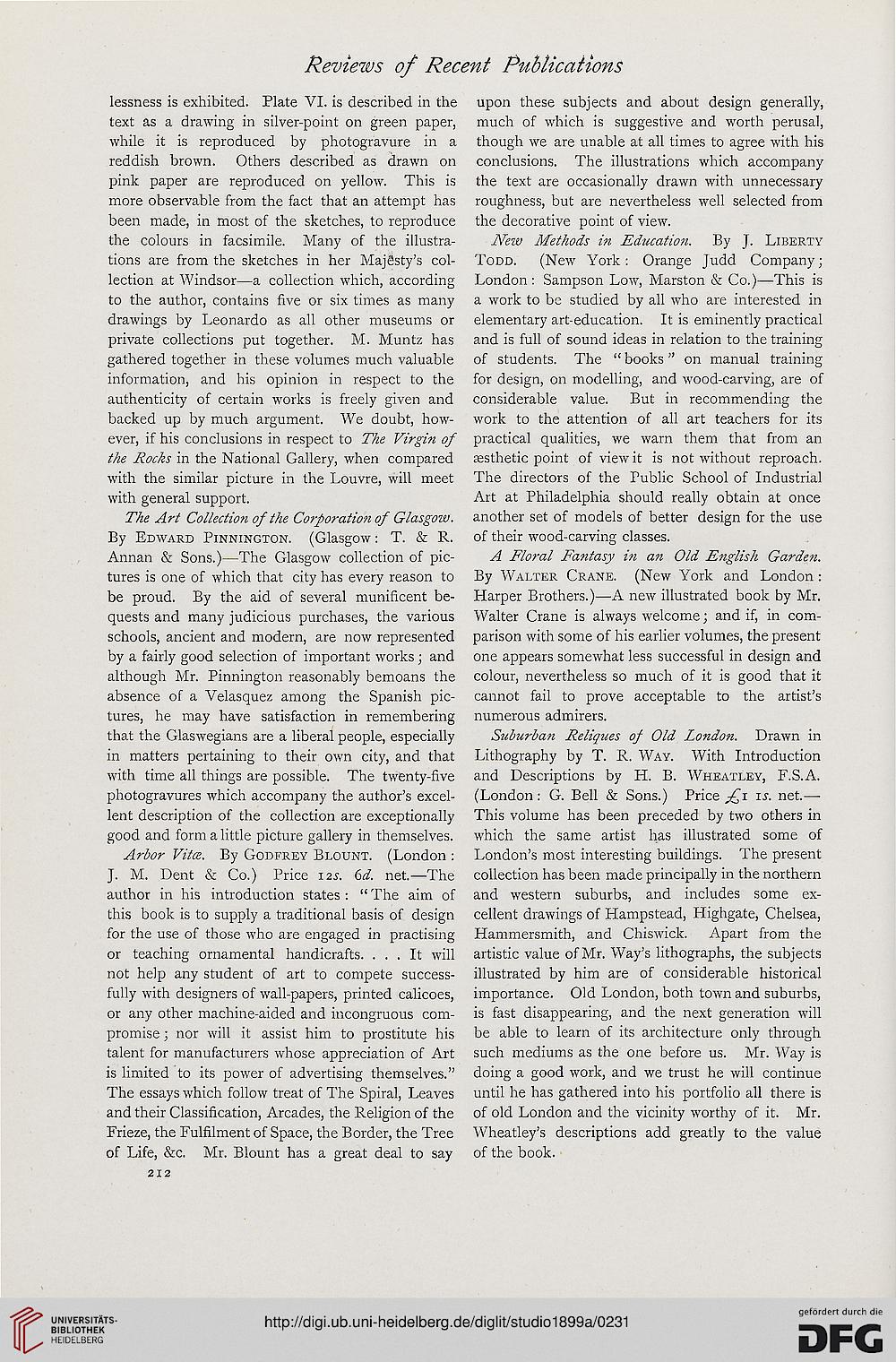 lessness is exhibited. Plate VI. is described in the
text as a drawing in silver-point on green paper,
while it is reproduced by photogravure in a
reddish brown. Others described as drawn on
pink paper are reproduced on yellow. This is
more observable from the fact that an attempt has
been made, in most of the sketches, to reproduce
the colours in facsimile. Many of the illustra-
tions are from the sketches in her Majesty's col-
lection at Windsor—a collection which, according
to the author, contains five or six times as many
drawings by Leonardo as all other museums or
private collections put together. M. Muntz has
gathered together in these volumes much valuable
information, and his opinion in respect to the
authenticity of certain works is freely given and
backed up by much argument. We doubt, how-
ever, if his conclusions in respect to The Virgin of
the Rocks in the National Gallery, when compared
with the similar picture in the Louvre, will meet
with general support.

The Art Collectiofi of the Corporation of Glasgow.
By Edward Pinnington. (Glasgow: T. & R.
Annan & Sons.)—The Glasgow collection of pic-
tures is one of which that city has every reason to
be proud. By the aid of several munificent be-
quests and many judicious purchases, the various
schools, ancient and modern, are now represented
by a fairly good selection of important works; and
although Mr. Pinnington reasonably bemoans the
absence of a Velasquez among the Spanish pic-
tures, he may have satisfaction in remembering
that the Glaswegians are a liberal people, especially
in matters pertaining to their own city, and that
with time all things are possible. The twenty-five
photogravures which accompany the author's excel-
lent description of the collection are exceptionally
good and form a little picture gallery in themselves.

Arbor Vita. By Godfrey Blount. (London :
J. M. Dent & Co.) Price 125. 6d. net—The
author in his introduction states : " The aim of
this book is to supply a traditional basis of design
for the use of those who are engaged in practising
or teaching ornamental handicrafts. ... It will
not help any student of art to compete success-
fully with designers of wall-papers, printed calicoes,
or any other machine-aided and incongruous com-
promise ; nor will it assist him to prostitute his
talent for manufacturers whose appreciation of Art
is limited to its power of advertising themselves."
The essays which follow treat of The Spiral, Leaves
and their Classification, Arcades, the Religion of the
Frieze, the Fulfilment of Space, the Border, the Tree
of Life, &c. Mr. Blount has a great deal to say
212

upon these subjects and about design generally,
much of which is suggestive and worth perusal,
though we are unable at all times to agree with his
conclusions. The illustrations which accompany
the text are occasionally drawn with unnecessary
roughness, but are nevertheless well selected from
the decorative point of view.

New Methods in Education. By J. Liberty
Todd. (New York: Orange Judd Company;
London : Sampson Low, Marston & Co.)—This is
a work to be studied by all who are interested in
elementary art-education. It is eminently practical
and is full of sound ideas in relation to the training
of students. The " books " on manual training
for design, on modelling, and wood-carving, are of
considerable value. But in recommending the
work to the attention of all art teachers for its
practical qualities, we warn them that from an
Eesthetic point of view it is not without reproach.
The directors of the Fublic School of Industrial
Art at Philadelphia should really obtain at once
another set of models of better design for the use
of their wood-carving classes.

A Floral Fantasy in an Old English Garden.
By Walter Crane. (New York and London:
Harper Brothers.)—A new illustrated book by Mr.
Walter Crane is always welcome; and if, in com-
parison with some of his earlier volumes, the present
one appears somewhat less successful in design and
colour, nevertheless so much of it is good that it
cannot fail to prove acceptable to the artist's
numerous admirers.

Suburban Reliques of Old London. Drawn in
Lithography by T. R. Way. With Introduction
and Descriptions by H. B. Wheatley, F.S.A.
(London: G. Bell & Sons.) Price £1 is. net.—
This volume has been preceded by two others in
which the same artist has illustrated some of
London's most interesting buildings. The present
collection has been made principally in the northern
and western suburbs, and includes some ex-
cellent drawings of Hampstead, Highgate, Chelsea,
Hammersmith, and Chiswick. Apart from the
artistic value of Mr. Way's lithographs, the subjects
illustrated by him are of considerable historical
importance. Old London, both town and suburbs,
is fast disappearing, and the next generation will
be able to learn of its architecture only through
such mediums as the one before us. Mr. Way is
doing a good work, and we trust he will continue
until he has gathered into his portfolio all there is
of old London and the vicinity worthy of it. Mr.
Wheatley's descriptions add greatly to the value
of the book.