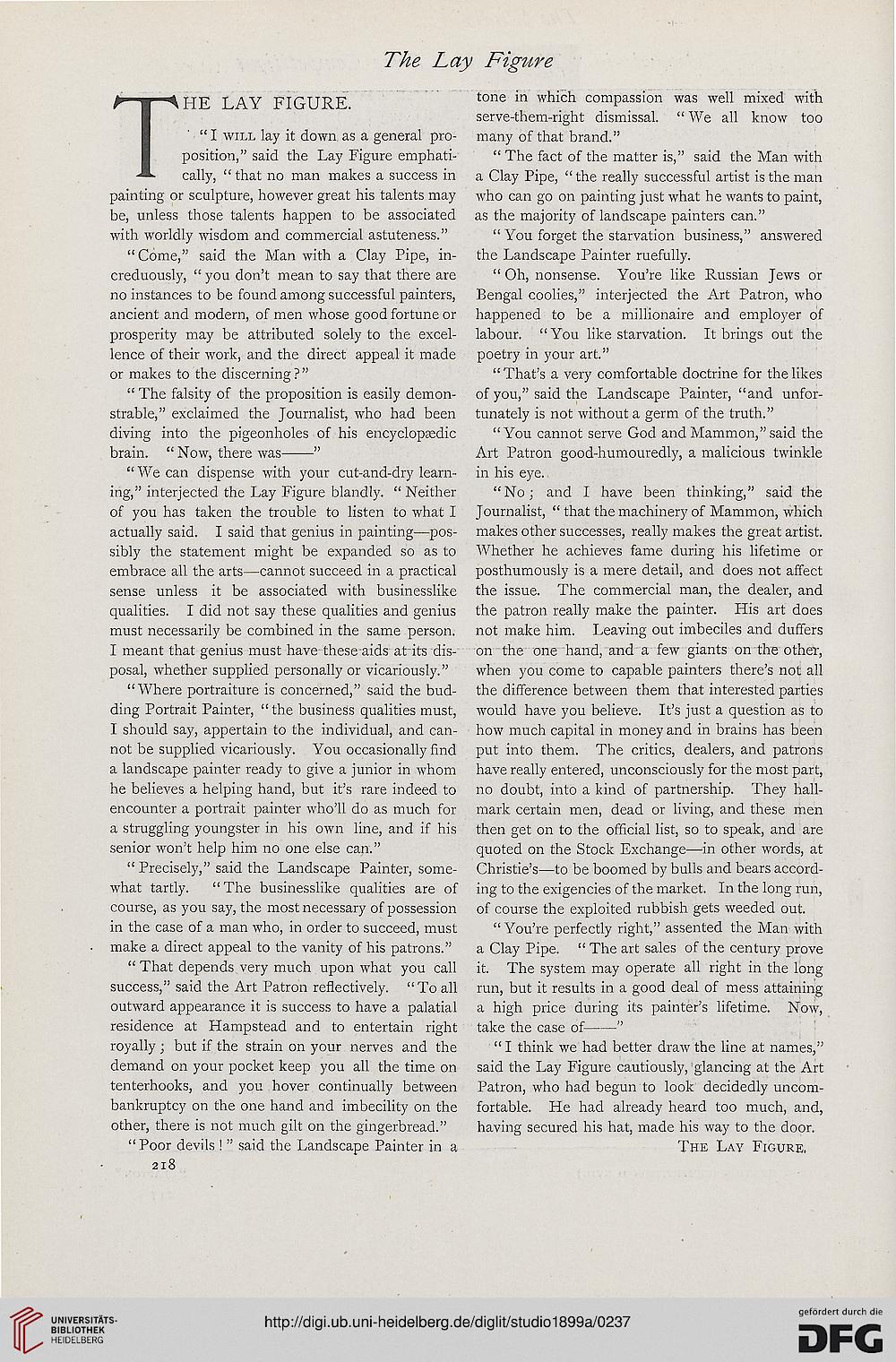 THE LAY FIGURE.
" I will lay it down as a general pro-
position," said the Lay Figure emphati-
cally, " that no man makes a success in
painting or sculpture, however great his talents may
be, unless those talents happen to be associated
with worldly wisdom and commercial astuteness."

"Come," said the Man with a Clay Pipe, in-
creduously, " you don't mean to say that there are
no instances to be found among successful painters,
ancient and modern, of men whose good fortune or
prosperity may be attributed solely to the excel-
lence of their work, and the direct appeal it made
or makes to the discerning ? "

" The falsity of the proposition is easily demon-
strable," exclaimed the Journalist, who had been
diving into the pigeonholes of his encyclopaedic

"We can dispense with your cut-and-dry learn-
ing," interjected the Lay Figure blandly. " Neither
of you has taken the trouble to listen to what I
actually said. I said that genius in painting—pos-
sibly the statement might be expanded so as to
embrace all the arts—cannot succeed in a practical
sense unless it be associated with businesslike
qualities. I did not say these qualities and genius
must necessarily be combined in the same person.
I meant that genius must have these aids at its dis-
posal, whether supplied personally or vicariously."

"Where portraiture is concerned," said the bud-
ding Portrait Painter, " the business qualities must,
I should say, appertain to the individual, and can-
not be supplied vicariously. You occasionally find
a landscape painter ready to give a junior in whom
he believes a helping hand, but it's rare indeed to
encounter a portrait painter who'll do as much for
a struggling youngster in his own line, and if his
senior won't help him no one else can."

" Precisely," said the Landscape Painter, some-
what tartly. "The businesslike qualities are of
course, as you say, the most necessary of possession
in the case of a man who, in order to succeed, must
make a direct appeal to the vanity of his patrons."

" That depends very much upon what you call
success," said the Art Patron reflectively. "Toall
outward appearance it is success to have a palatial
residence at Hampstead and to entertain right
royally ; but if the strain on your nerves and the
demand on your pocket keep you all the time on
tenterhooks, and you hover continually between
bankruptcy on the one hand and imbecility on the
other, there is not much gilt on the gingerbread."
" Poor devils! " said the Landscape Painter in a
218

tone in which compassion was well mixed with
serve-them-right dismissal. " We all know too
many of that brand."

" The fact of the matter is," said the Man with
a Clay Pipe, " the really successful artist is the man
who can go on painting just what he wants to paint,
as the majority of landscape painters can."

" You forget the starvation business," answered
the Landscape Painter ruefully.

" Oh, nonsense. You're like Russian Jews or
Bengal coolies," interjected the Art Patron, who
happened to be a millionaire and employer of
labour. "You like starvation. It brings out the
poetry in your art."

" That's a very comfortable doctrine for the likes
of you," said the Landscape Painter, "and unfor-
tunately is not without a germ of the truth."

"You cannot serve God and Mammon," said the
Art Patron good-humouredly, a malicious twinkle
in his eye.

"No; and I have been thinking," said the
Journalist, " that the machinery of Mammon, which
makes other successes, really makes the great artist.
Whether he achieves fame during his lifetime or
posthumously is a mere detail, and does not affect
the issue. The commercial man, the dealer, and
the patron really make the painter. His art does
not make him. Leaving out imbeciles and duffers
on the one hand, and a few giants on the other,
when you come to capable painters there's not all
the difference between them that interested parties
would have you believe. It's just a question as to
how much capital in money and in brains has been
put into them. The critics, dealers, and patrons
have really entered, unconsciously for the most part,
no doubt, into a kind of partnership. They hall-
mark certain men, dead or living, and these men
then get on to the official list, so to speak, and are
quoted on the Stock Exchange—in other words, at
Christie's—to be boomed by bulls and bears accord-
ing to the exigencies of the market. In the long run,
of course the exploited rubbish gets weeded out.

"You're perfectly right," assented the Man with
a Clay Pipe. " The art sales of the century prove
it. The system may operate all right in the long
run, but it results in a good deal of mess attaining
a high price during its painter's lifetime. Now,
take the case of--"

" I think we had better draw the line at names,"
said the Lay Figure cautiously, glancing at the Art
Patron, who had begun to look decidedly uncom-
fortable. He had already heard too much, and,
having secured his hat, made his way to the door.