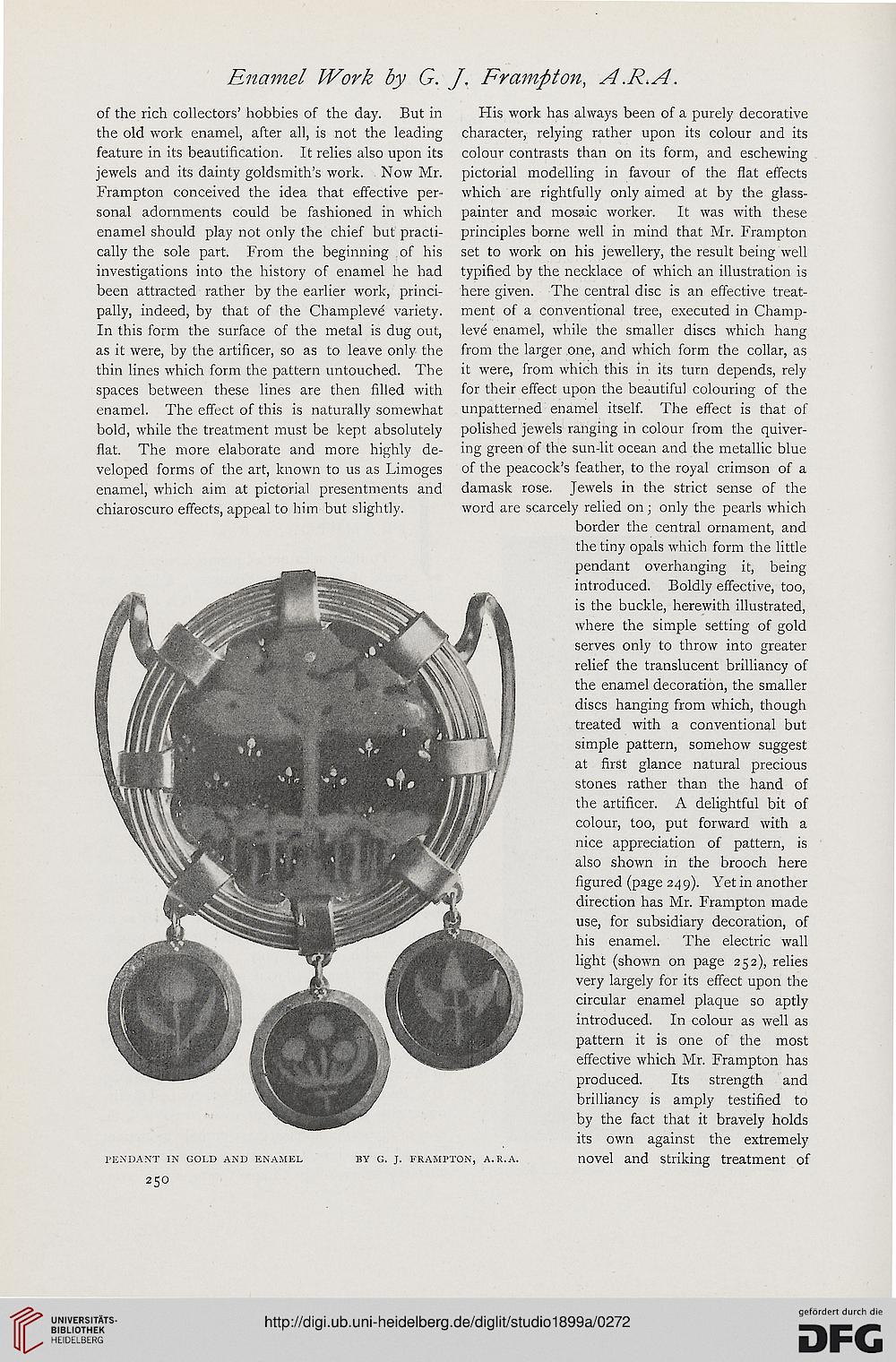 of the rich collectors' hobbies of the day. But in His work has always been of a purely decorative
the old work enamel, after all, is not the leading character, relying rather upon its colour and its
feature in its beautification. It relies also upon its colour contrasts than on its form, and eschewing
jewels and its dainty goldsmith's work. Now Mr. pictorial modelling in favour of the flat effects
Frampton conceived the idea that effective per- which are rightfully only aimed at by the glass-
sonal adornments could be fashioned in which painter and mosaic worker. It was with these
enamel should play not only the chief but practi- principles borne well in mind that Mr. Frampton
cally the sole part. From the beginning of his set to work on his jewellery, the result being well
investigations into the history of enamel he had typified by the necklace of which an illustration is
been attracted rather by the earlier work, princi- here given. The central disc is an effective treat-
pally, indeed, by that of the Champleve variety, ment of a conventional tree, executed in Champ-
In this form the surface of the metal is dug out, leve enamel, while the smaller discs which hang
as it were, by the artificer, so as to leave only the from the larger one, and which form the collar, as
thin lines which form the pattern untouched. The it were, from which this in its turn depends, rely
spaces between these lines are then filled with for their effect upon the beautiful colouring of the
enamel. The effect of this is naturally somewhat unpatterned enamel itself. The effect is that of
bold, while the treatment must be kept absolutely polished jewels ranging in colour from the quiver-
flat. The more elaborate and more highly de- ing green of the sun-lit ocean and the metallic blue
veloped forms of the art, known to us as Limoges of the peacock's feather, to the royal crimson of a
enamel, which aim at pictorial presentments and damask rose. Jewels in the strict sense of the
chiaroscuro effects, appeal to him but slightly. word are scarcely relied on ; only the pearls which

border the central ornament, and
the tiny opals which form the little
pendant overhanging it, being
introduced. Boldly effective, too,
is the buckle, herewith illustrated,
where the simple setting of gold
serves only to throw into greater
relief the translucent brilliancy of
the enamel decoration, the smaller
discs hanging from which, though
treated with a conventional but
simple pattern, somehow suggest
at first glance natural precious
stones rather than the hand of
the artificer. A delightful bit of
colour, too, put forward with a
nice appreciation of pattern, is
also shown in the brooch here
figured (page 249). Yet in another
direction has Mr. Frampton made
use, for subsidiary decoration, of
his enamel. The electric wall
light (shown on page 252), relies
very largely for its effect upon the
circular enamel plaque so aptly
introduced. In colour as well as
pattern it is one of the most
effective which Mr. Frampton has
produced. Its strength and
brilliancy is amply testified to
by the fact that it bravely holds
its own against the extremely

pendant in gold and enamel by g. j. frampton, a.r.a. novel and striking treatment of