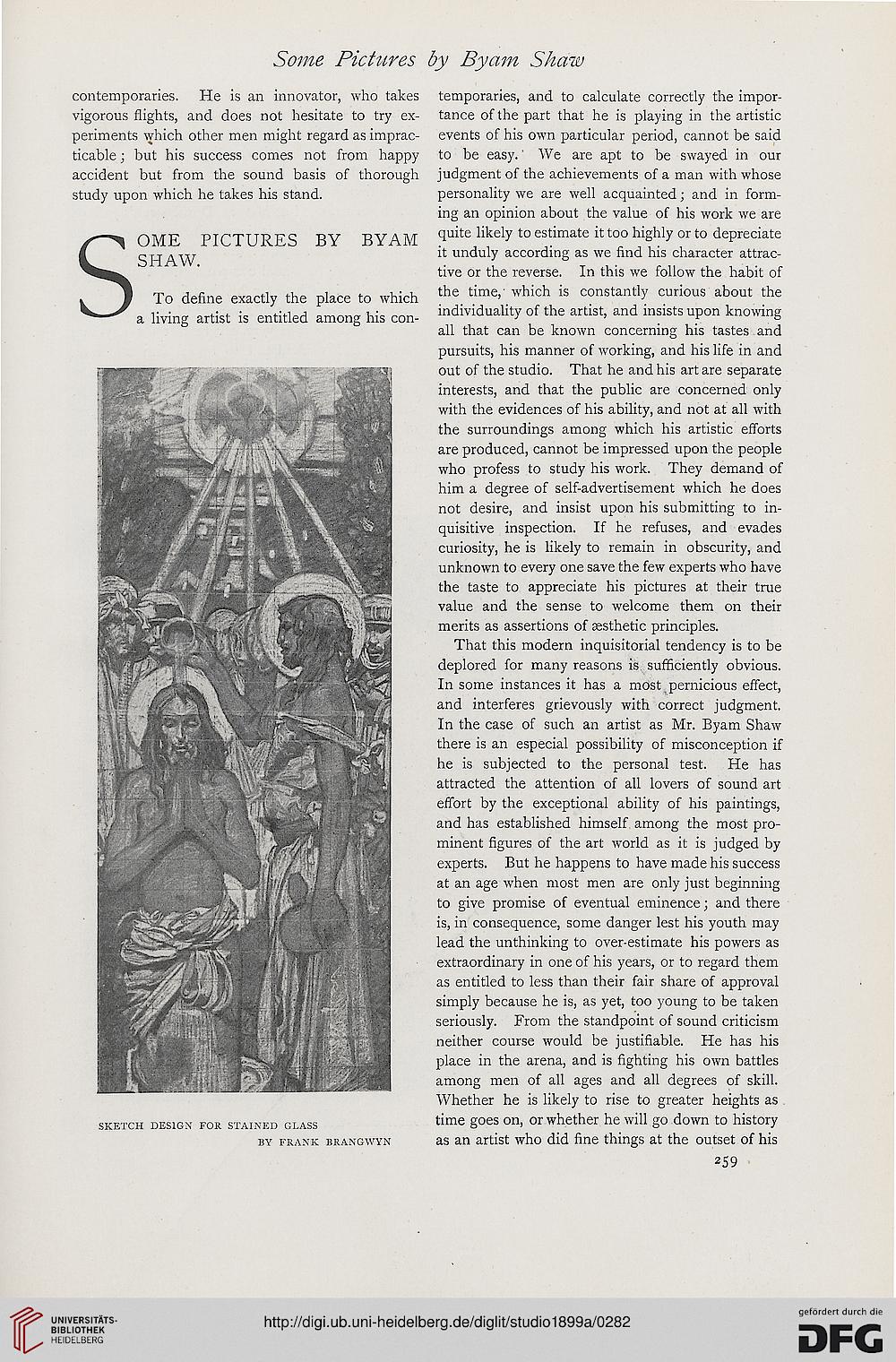 contemporaries. He is an innovator, who takes temporaries, and to calculate correctly the impor-

vigorous flights, and does not hesitate to try ex- tance of the part that he is playing in the artistic

periments which other men might regard as imprac- events of his own particular period, cannot be said

ticable; but his success comes not from happy to be easy. We are apt to be swayed in our

study upon which he takes his stand. personality we are well acquainted; and in form-
ing an opinion about the value of his work we are

tive or the reverse. In this we follow the habit of

To define exactly the place to which the time> which is constantly curious about the
a living artist is entitled among his con- individuality of the artist, and insists upon knowing

all that can be known concerning his tastes and
pursuits, his manner of working, and his life in and
out of the studio. That he and his art are separate
interests, and that the public are concerned only
with the evidences of his ability, and not at all with
the surroundings among which his artistic efforts
are produced, cannot be impressed upon the people
who profess to study his work. They demand of
him a degree of self-advertisement which he does
not desire, and insist upon his submitting to in-
quisitive inspection. If he refuses, and evades
curiosity, he is likely to remain in obscurity, and
unknown to every one save the few experts who have
the taste to appreciate his pictures at their true
value and the sense to welcome them on their
merits as assertions of aesthetic principles.

That this modern inquisitorial tendency is to be
deplored for many reasons is sufficiently obvious.
In some instances it has a most pernicious effect,
and interferes grievously with correct judgment.
In the case of such an artist as Mr. Byam Shaw
there is an especial possibility of misconception if
he is subjected to the personal test. He has
attracted the attention of all lovers of sound art
effort by the exceptional ability of his paintings,
and has established himself among the most pro-
minent figures of the art world as it is judged by
experts. But he happens to have made his success
at an age when most men are only just beginning
to give promise of eventual eminence; and there
is, in consequence, some danger lest his youth may
lead the unthinking to over-estimate his powers as
extraordinary in one of his years, or to regard them
as entitled to less than their fair share of approval
simply because he is, as yet, too young to be taken
seriously. From the standpoint of sound criticism
neither course would be justifiable. He has his
place in the arena, and is fighting his own battles
among men of all ages and all degrees of skill.
Whether he is likely to rise to greater heights as
time goes on, or whether he will go down to history
by frank brangwyn as an artist who did fine things at the outset of his