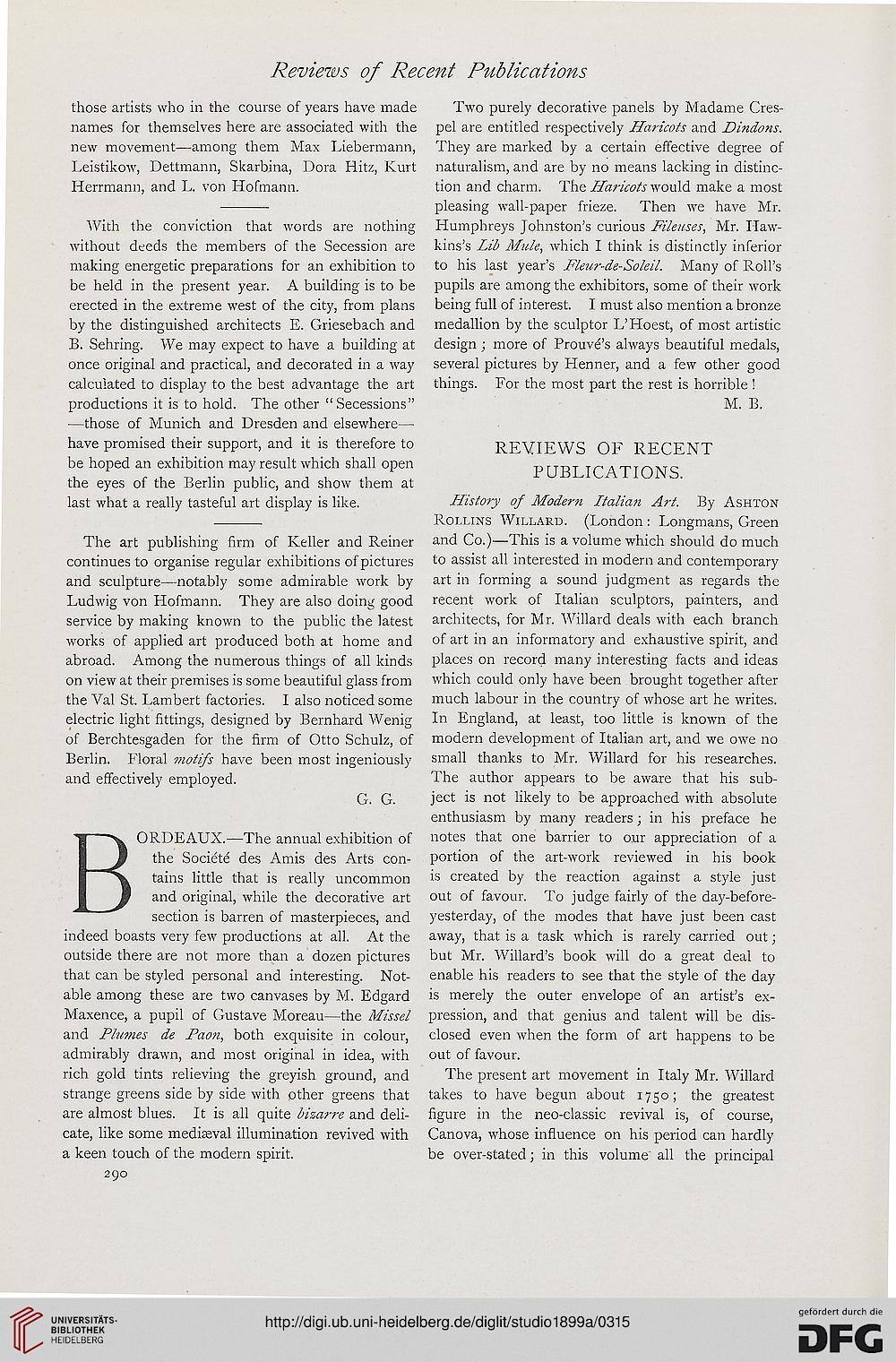 those artists who in the course of years have made
names for themselves here are associated with the
new movement—among them Max Liebermann,
Leistikow, Dettmann, Skarbina, Dora Hitz, Kurt
Herrmann, and L. von Hofmann.

With the conviction that words are nothing
without deeds the members of the Secession are
making energetic preparations for an exhibition to
be held in the present year. A building is to be
erected in the extreme west of the city, from plans
by the distinguished architects E. Griesebach and
B. Sehring. We may expect to have a building at
once original and practical, and decorated in a way
calculated to display to the best advantage the art
productions it is to hold. The other "Secessions"
—those of Munich and Dresden and elsewhere—
have promised their support, and it is therefore to
be hoped an exhibition may result which shall open
the eyes of the Berlin public, and show them at
last what a really tasteful art display is like.

The art publishing firm of Keller and Reiner
continues to organise regular exhibitions of pictures
and sculpture—notably some admirable work by
Ludwig von Hofmann. They are also doing good
service by making known to the public the latest
works of applied art produced both at home and
abroad. Among the numerous things of all kinds
on view at their premises is some beautiful glass from
the Val St. Lambert factories. I also noticed some
electric light fittings, designed by Bernhard Wenig
of Berchtesgaden for the firm of Otto Schulz, of
Berlin. Floral motifs have been most ingeniously
and effectively employed.

BORDEAUX.—The annual exhibition of
the Societe des Amis des Arts con-
tains little that is really uncommon
and original, while the decorative art
section is barren of masterpieces, and
indeed boasts very few productions at all. At the
outside there are not more than a dozen pictures
that can be styled personal and interesting. Not-
able among these are two canvases by M. Edgard
Maxence, a pupil of Gustave Moreau—the Missel
and Plumes de Paon, both exquisite in colour,
admirably drawn, and most original in idea, with
rich gold tints relieving the greyish ground, and
strange greens side by side with other greens that
are almost blues. It is all quite bizarre and deli-
cate, like some mediaeval illumination revived with
a keen touch of the modern spirit.
290

Two purely decorative panels by Madame Cres-
pel are entitled respectively Haricots and Dindons.
They are marked by a certain effective degree of
naturalism, and are by no means lacking in distinc-
tion and charm. The Haricots would make a most
pleasing wall-paper frieze. Then we have Mr.
Humphreys Johnston's curious Fileuses, Mr. Haw-
kins's Lib Mule, which I think is distinctly inferior
to his last year's Fleur-de-Soleil. Many of Roll's
pupils are among the exhibitors, some of their work
being full of interest. I must also mention a bronze
medallion by the sculptor L'Hoest, of most artistic
design ; more of Prouve's always beautiful medals,
several pictures by Henner, and a few other good
things. For the most part the rest is horrible !

History of Modern Italian Art. By Ashton
Rollins Willard. (London : Longmans, Green
and Co.)—This is a volume which should do much
to assist all interested in modern and contemporary
art in forming a sound judgment as regards the
recent work of Italian sculptors, painters, and
architects, for Mr. Willard deals with each branch
of art in an informatory and exhaustive spirit, and
places on record many interesting facts and ideas
which could only have been brought together after
much labour in the country of whose art he writes.
In England, at least, too little is known of the
modern development of Italian art, and we owe no
small thanks to Mr. Willard for his researches.
The author appears to be aware that his sub-
ject is not likely to be approached with absolute
enthusiasm by many readers; in his preface he
notes that one barrier to our appreciation of a
portion of the art-work reviewed in his book
is created by the reaction against a style just
out of favour. To judge fairly of the day-before-
yesterday, of the modes that have just been cast
away, that is a task which is rarely carried out;
but Mr. Willard's book will do a great deal to
enable his readers to see that the style of the day
is merely the outer envelope of an artist's ex-
pression, and that genius and talent will be dis-
closed even when the form of art happens to be
out of favour.

The present art movement in Italy Mr. Willard
takes to have begun about 1750; the greatest
figure in the neo-classic revival is, of course,
Canova, whose influence on his period can hardly
be over-stated; in this volume' all the principal