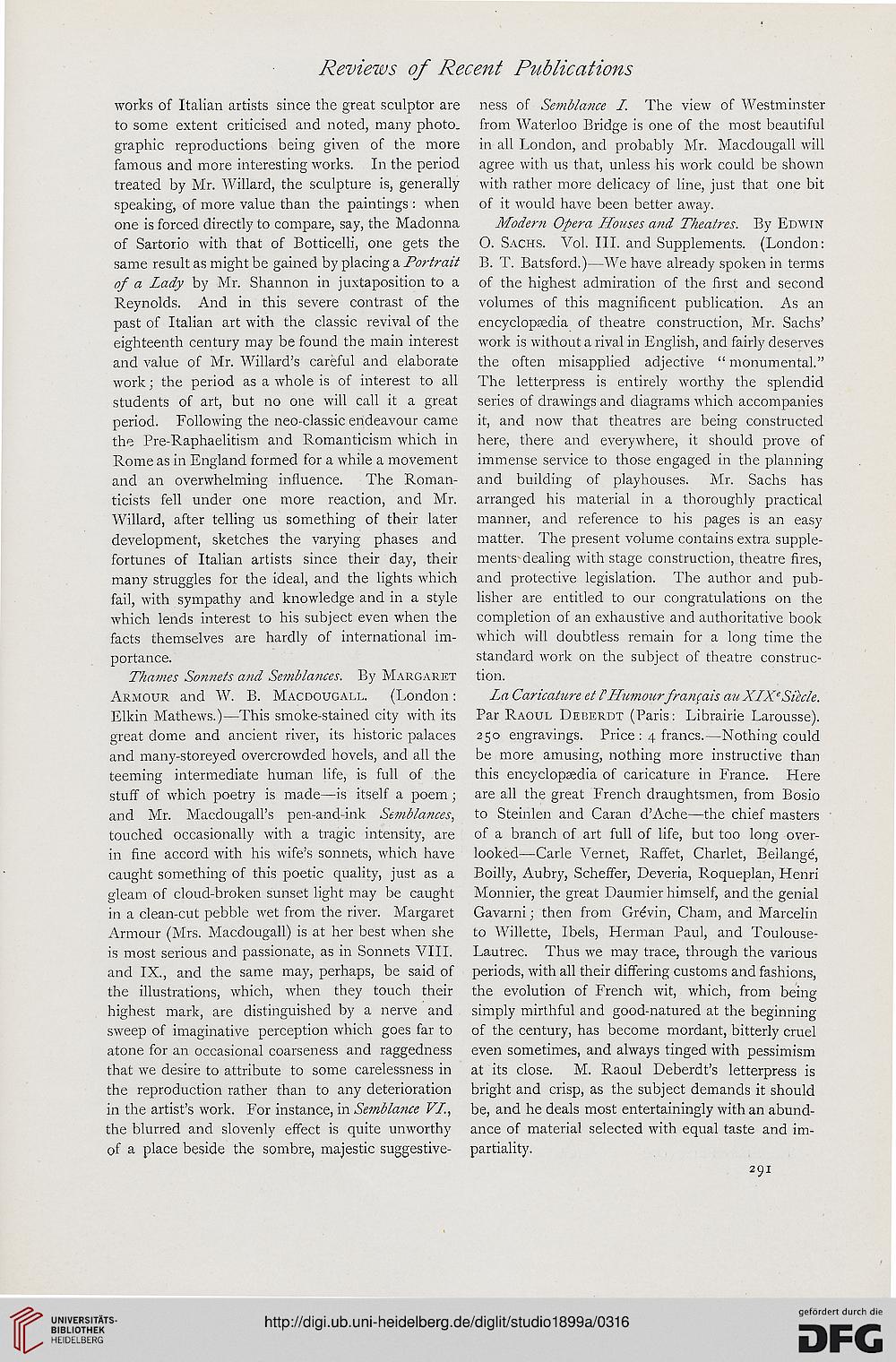 works of Italian artists since the great sculptor are
to some extent criticised and noted, many photo,
graphic reproductions being given of the more
famous and more interesting works. In the period
treated by Mr. Willard, the sculpture is, generally
speaking, of more value than the paintings : when
one is forced directly to compare, say, the Madonna
of Sartorio with that of Botticelli, one gets the
same result as might be gained by placing a Portrait
of a Lady by Mr. Shannon in juxtaposition to a
Reynolds. And in this severe contrast of the
past of Italian art with the classic revival of the
eighteenth century may be found the main interest
and value of Mr. Willard's careful and elaborate
work; the period as a whole is of interest to all
students of art, but no one will call it a great
period. Following the neo-classic endeavour came
the Pre-Raphaelitism and Romanticism which in
Rome as in England formed for a while a movement
and an overwhelming influence. The Roman-
ticists fell under one more reaction, and Mr.
Willard, after telling us something of their later
development, sketches the varying phases and
fortunes of Italian artists since their day, their
many struggles for the ideal, and the lights which
fail, with sympathy and knowledge and in a style
which lends interest to his subject even when the
facts themselves are hardly of international im-
portance.

Thames Sonnets and Semblances. By Margaret
Armour and W. B. Macdougall. (London:
Elkin Mathews.)—This smoke-stained city with its
great dome and ancient river, its historic palaces
and many-storeyed overcrowded hovels, and all the
teeming intermediate human life, is full of the
stuff of which poetry is made—is itself a poem ;
and Mr. Macdougall's pen-and-ink Semblances,
touched occasionally with a tragic intensity, are
in fine accord with his wife's sonnets, which have
caught something of this poetic quality, just as a
gleam of cloud-broken sunset light may be caught
in a clean-cut pebble wet from the river. Margaret
Armour (Mrs. Macdougall) is at her best when she
is most serious and passionate, as in Sonnets VIII.
and IX., and the same may, perhaps, be said of
the illustrations, which, when they touch their
highest mark, are distinguished by a nerve and
sweep of imaginative perception which goes far to
atone for an occasional coarseness and raggedness
that we desire to attribute to some carelessness in
the reproduction rather than to any deterioration
in the artist's work. For instance, in Semblance VI.,
the blurred and slovenly effect is quite unworthy
of a place beside the sombre, majestic suggestive-

ness of Semblance I. The view of Westminster
from Waterloo Bridge is one of the most beautiful
in all London, and probably Mr. Macdougall will
agree with us that, unless his work could be shown
with rather more delicacy of line, just that one bit
of it would have been better away.

Modern Opera Houses and Theatres. By Edwin
O. Sachs. Vol. III. and Supplements. (London:
B. T. Batsford.)—We have already spoken in terms
of the highest admiration of the first and second
volumes of this magnificent publication. As an
encyclopaedia of theatre construction, Mr. Sachs'
work is without a rival in English, and fairly deserves
the often misapplied adjective " monumental."
The letterpress is entirely worthy the splendid
series of drawings and diagrams which accompanies
it, and now that theatres are being constructed
here, there and everywhere, it should prove of
immense service to those engaged in the planning
and building of playhouses. Mr. Sachs has
arranged his material in a thoroughly practical
manner, and reference to his pages is an easy
matter. The present volume contains extra supple-
ments* dealing with stage construction, theatre fires,
and protective legislation. The author and pub-
lisher are entitled to our congratulations on the
completion of an exhaustive and authoritative book
which will doubtless remain for a long time the
standard work on the subject of theatre construc-
tion.

La Caricature et FHumourfranfais au XIX'Steele.
Par Raoul Deberdt (Paris: Librairie Larousse).
250 engravings. Price: 4 francs.—Nothing could
be more amusing, nothing more instructive than
this encyclopaedia of caricature in France. Here
are all the great French draughtsmen, from Bosio
to Steinlen and Caran d'Ache—the chief masters
of a branch of art full of life, but too long over-
looked—Carle Vernet, Raffet, Charlet, Beilange,
Boilly, Aubry, Scheffer, Deveria, Roqueplan, Henri
Monnier, the great Daumier himself, and the genial
Gavarni; then from Grevin, Cham, and Marcelin
to Willette, Ibels, Herman Paul, and Toulouse-
Lautrec. Thus we may trace, through the various
periods, with all their differing customs and fashions,
the evolution of French wit, which, from being
simply mirthful and good-natured at the beginning
of the century, has become mordant, bitterly cruel
even sometimes, and always tinged with pessimism
at its close. M. Raoul Deberdt's letterpress is
bright and crisp, as the subject demands it should
be, and he deals most entertainingly with an abund-
ance of material selected with equal taste and im-
partiality.