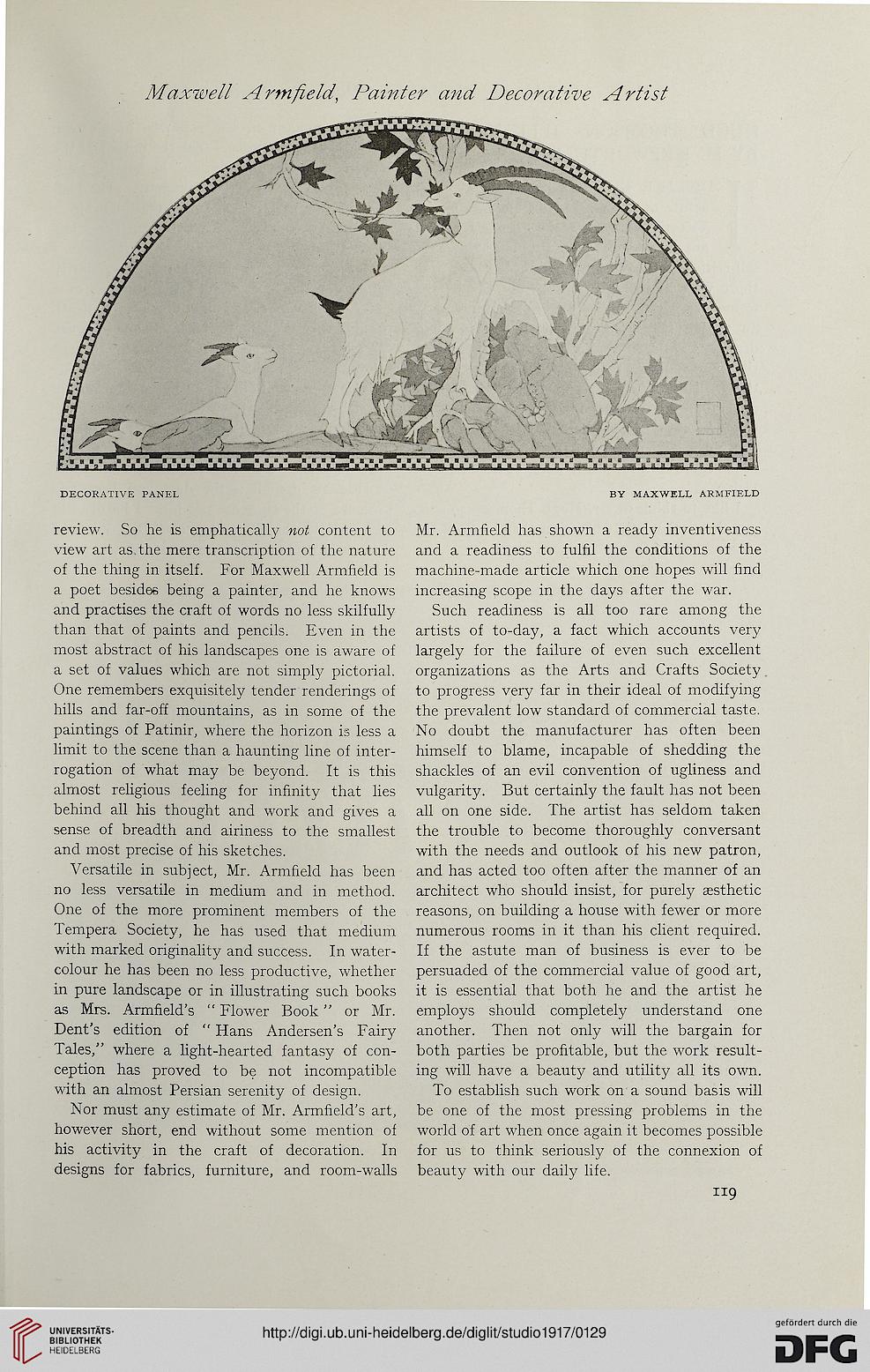 review. So he is emphatically not content to
view art as the mere transcription of the nature
of the thing in itself. For Maxwell Armfield is
a poet besides being a painter, and he knows
and practises the craft of words no less skilfully
than that of paints and pencils. Even in the
most abstract of his landscapes one is aware of
a set of values which are not simply pictorial.
One remembers exquisitely tender renderings of
hills and far-off mountains, as in some of the
paintings of Patinir, where the horizon is less a
limit to the scene than a haunting line of inter-
rogation of what may be beyond. It is this
almost religious feeling for infinity that lies
behind all his thought and work and gives a
sense of breadth and airiness to the smallest
and most precise of his sketches.

Versatile in subject, Mr. Armfield has been
no less versatile in medium and in method.
One of the more prominent members of the
Tempera Society, he has used that medium
with marked originality and success. In water-
colour he has been no less productive, whether
in pure landscape or in illustrating such books
as Mrs. Armfield’s “ Flower Book ” or Mr.
Dent’s edition of “ Hans Andersen’s Fairy
Tales,” where a light-hearted fantasy of con-
ception has proved to be not incompatible
with an almost Persian serenity of design.

Nor must any estimate of Mr. Armfield’s art,
however short, end without some mention of
his activity in the craft of decoration. In
designs for fabrics, furniture, and room-walls

Mr. Armfield has shown a ready inventiveness
and a readiness to fulfil the conditions of the
machine-made article which one hopes will find
increasing scope in the days after the war.

Such readiness is all too rare among the
artists of to-day, a fact which accounts very
largely for the failure of even such excellent
organizations as the Arts and Crafts Society
to progress very far in their ideal of modifying
the prevalent low standard of commercial taste.
No doubt the manufacturer has often been
himself to blame, incapable of shedding the
shackles of an evil convention of ugliness and
vulgarity. But certainly the fault has not been
all on one side. The artist has seldom taken
the trouble to become thoroughly conversant
with the needs and outlook of his new patron,
and has acted too often after the manner of an
architect who should insist, for purely aesthetic
reasons, on building a house with fewer or more
numerous rooms in it than his client required.
If the astute man of business is ever to be
persuaded of the commercial value of good art,
it is essential that both he and the artist he
employs should completely understand one
another. Then not only will the bargain for
both parties be profitable, but the work result-
ing will have a beauty and utility all its own.

To establish such work on a sound basis will
be one of the most pressing problems in the
world of art when once again it becomes possible
for us to think seriously of the connexion of
beauty with our daily life.