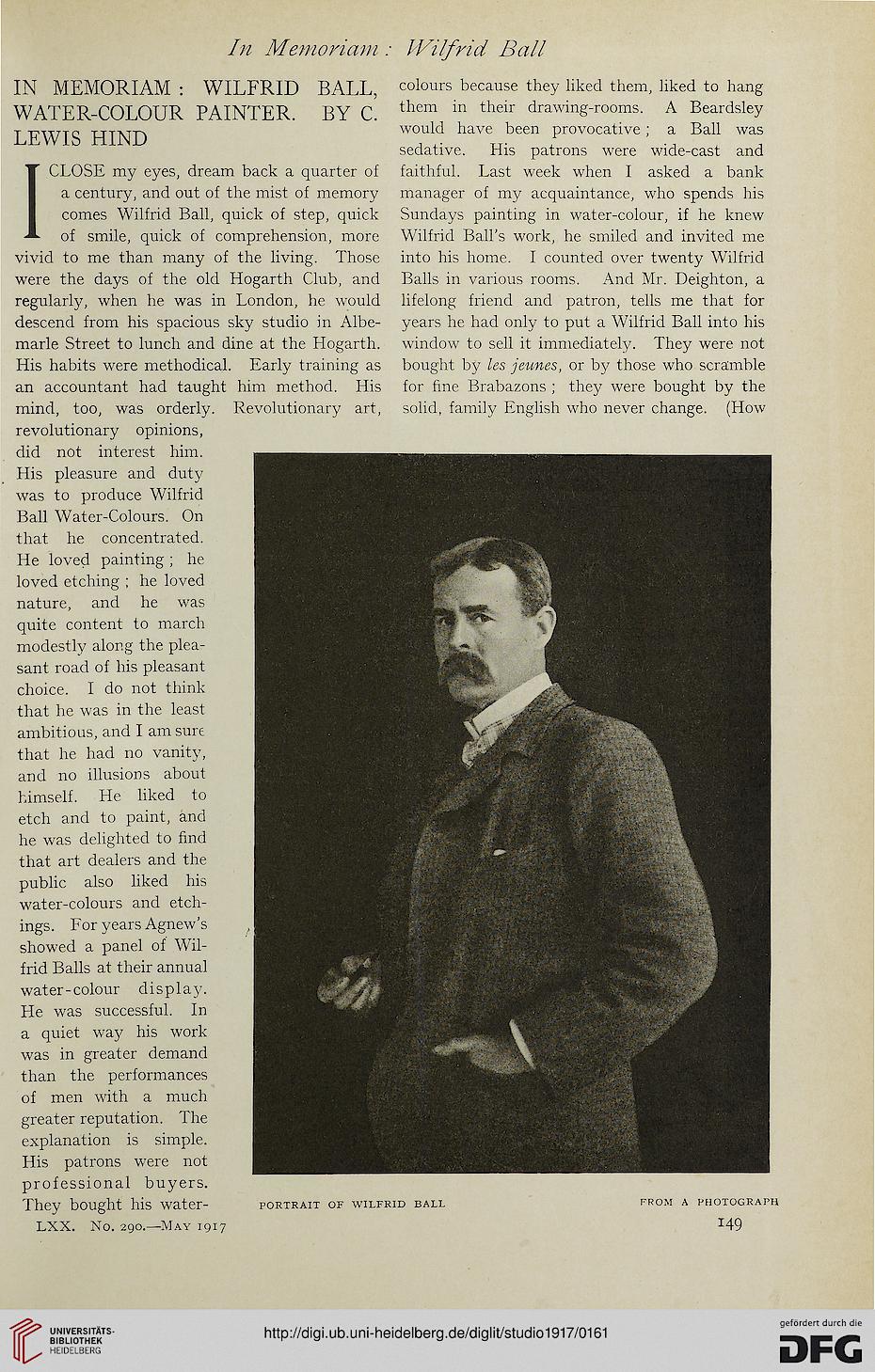 I CLOSE my eyes, dream back a quarter of
a century, and out of the mist of memory
comes Wilfrid Ball, quick of step, quick
of smile, quick of comprehension, more
vivid to me than many of the living. Those
were the days of the old Hogarth Club, and
regularly, when he was in London, he would
descend from his spacious sky studio in Albe-
marle Street to lunch and dine at the Hogarth.

His habits were methodical. Early training as
an accountant had taught him method. His
mind, too, was orderly. Revolutionary art,
revolutionary opinions,
did not interest him.

His pleasure and duty
was to produce Wilfrid
Ball Water-Colours. On
that he concentrated.

He loved painting; he
loved etching ; he loved
nature, and he was
quite content to march
modestly along the plea-
sant road of his pleasant
choice. I do not think
that he was in the least
ambitious, and I am sure
that he had no vanity,
and no illusions about
himself. He liked to
etch and to paint, and
he was delighted to find
that art dealers and the
public also liked his
water-colours and etch-
ings. For years Agnew’s
showed a panel of Wil-
frid Balls at their annual
water-colour display.

He was successful. In
a quiet way his work
was in greater demand
than the performances
of men with a much
greater reputation. The
explanation is simple.

His patrons were not
professional buyers.

They bought his water- portrait of wilfrid ball from a photograph

colours because they liked them, liked to hang
them in their drawing-rooms. A Beardsley
would have been provocative; a Ball was
sedative. His patrons were wide-cast and
faithful. Last week when I asked a bank
manager of my acquaintance, who spends his
Sundays painting in water-colour, if he knew
Wilfrid Ball’s work, he smiled and invited me
into his home. I counted over twenty Wilfrid
Balls in various rooms. And Mr. Deighton, a
lifelong friend and patron, tells me that for
years he had only to put a Wilfrid Ball into his
window to sell it immediately. They were not
bought by les jeunes, or by those who scramble
for fine Brabazons ; they were bought by the
solid, family English who never change. (How