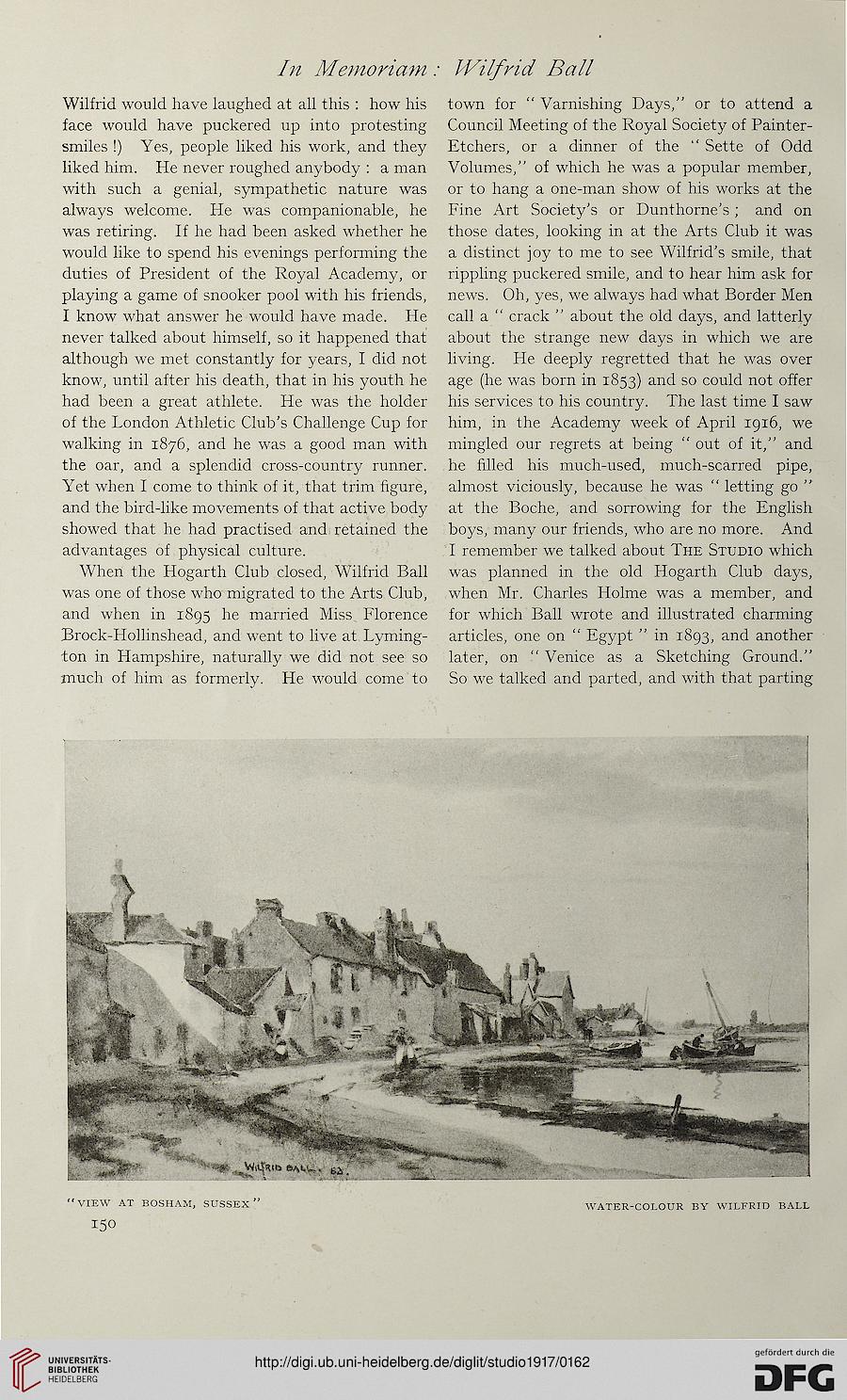 Wilfrid would have laughed at all this : how his
face would have puckered up into protesting
smiles !) Yes, people liked his work, and they
liked him. He never roughed anybody : a man
with such a genial, sympathetic nature was
always welcome. He was companionable, he
was retiring. If he had been asked whether he
would like to spend his evenings performing the
duties of President of the Royal Academy, or
playing a game of snooker pool with his friends,
I know what answer he would have made. He
never talked about himself, so it happened that
although we met constantly for years, I did not
know, until after his death, that in his youth he
had been a great athlete. He was the holder
of the London Athletic Club’s Challenge Cup for
walking in 1876, and he was a good man with
the oar, and a splendid cross-country runner.
Yet when I come to think of it, that trim figure,
and the bird-like movements of that active body
showed that he had practised and retained the
advantages of physical culture.

When the Hogarth Club closed, Wilfrid Ball
was one of those who migrated to the Arts Club,
and when in 1895 he married Miss Florence
Brock-Hollinshead, and went to live at Lyming-
ton in Hampshire, naturally we did not see so
much of him as formerly. He would come to

town for “ Varnishing Days,” or to attend a
Council Meeting of the Royal Society of Painter-
Etchers, or a dinner of the ” Sette of Odd
Volumes,” of which he was a popular member,
or to hang a one-man show of his works at the
Fine Art Society’s or Dunthorne’s; and on
those dates, looking in at the Arts Club it was
a distinct joy to me to see Wilfrid’s smile, that
rippling puckered smile, and to hear him ask for
news. Oh, yes, we always had what Border Men
call a “ crack ” about the old days, and latterly
about the strange new days in which we are
living. He deeply regretted that he was over
age (he was born in 1853) and so could not offer
his services to his country. The last time I saw
him, in the Academy week of April 1916, we
mingled our regrets at being “ out of it,” and
he filled his much-used, much-scarred pipe,
almost viciously, because he was “ letting go ”
at the Boche, and sorrowing for the English
boys, many our friends, who are no more. And
I remember we talked about The Studio which
was planned in the old Hogarth Club days,
when Mr. Charles Holme was a member, and
for which Ball wrote and illustrated charming
articles, one on “ Egypt ” in 1893, and another
later, on “ Venice as a Sketching Ground.”
So we talked and parted, and with that parting