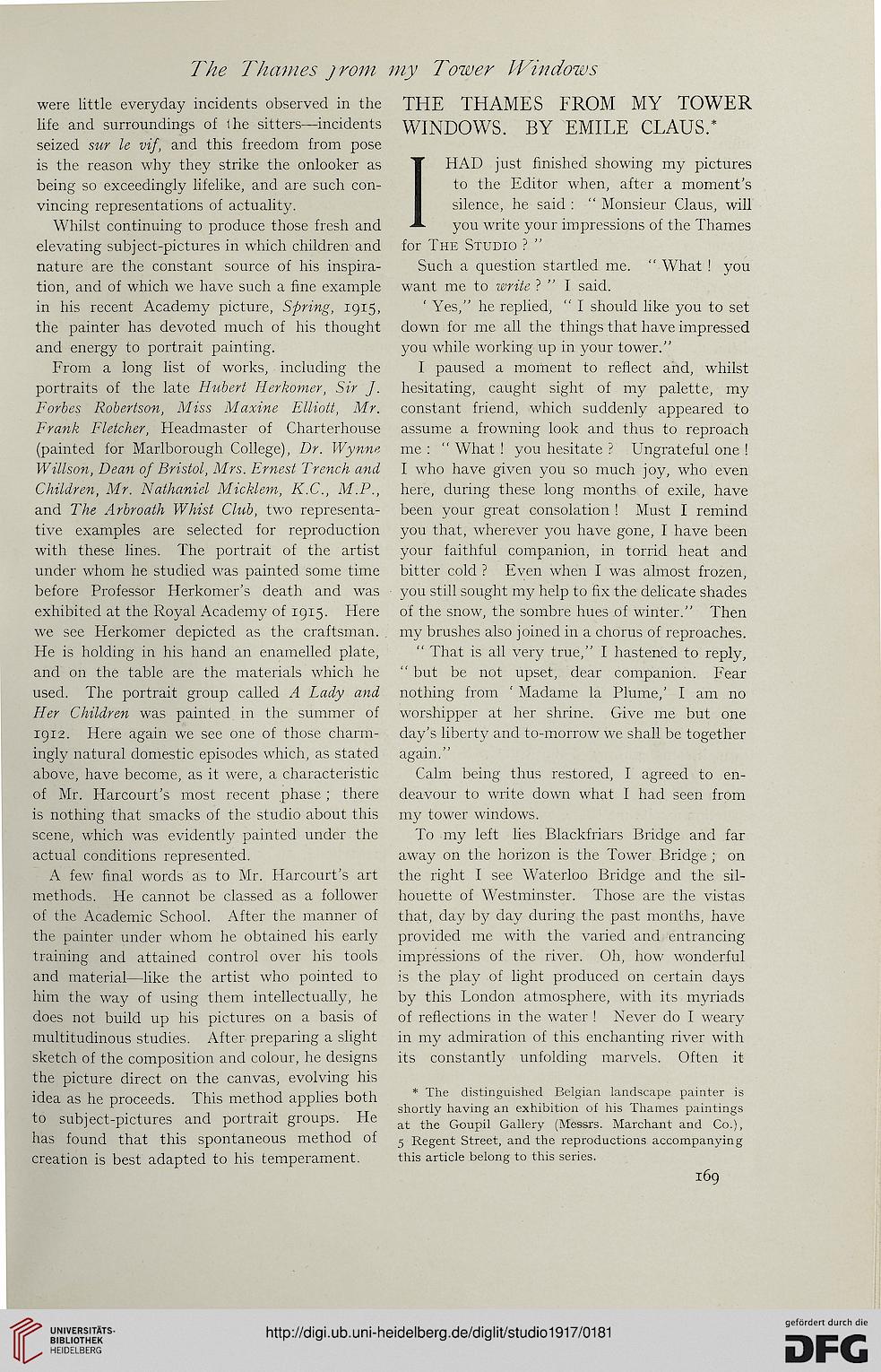 Information about OCR text
The Thames jrom my Tower Windows

were little everyday incidents observed in the
life and surroundings of Ihe sitters—incidents
seized sur le vif, and this freedom from pose
is the reason why they strike the onlooker as
being so exceedingly lifelike, and are such con-
vincing representations of actuality.

Whilst continuing to produce those fresh and
elevating subject-pictures in which children and
nature are the constant source of his inspira-
tion, and of which we have such a fine example
in his recent Academy picture, Spring, 1915,
the painter has devoted much of his thought
and energy to portrait painting.

From a long list of works, including the
portraits of the late Hubert Herkomer, Sir J.
Forbes Robertson, Miss Maxine Elliott, Mr.
Frank Fletcher, Headmaster of Charterhouse
(painted for Marlborough College), Dr. Wynne
Willson, Dean of Bristol, Mrs. Ernest Trench and
Children, Mr. Nathaniel Micklem, K.C., M.P.,
and The Arbroath Whist Club, two representa-
tive examples are selected for reproduction
with these lines. The portrait of the artist
under whom he studied was painted some time
before Professor Herkomer's death and was
exhibited at the Royal Academy of 1915. Here
we see Herkomer depicted as the craftsman.
He is holding in his hand an enamelled plate,
and on the table are the materials which he
used. The portrait group called A Lady and
Her Children was painted in the summer of
1912. Here again we see one of those charm-
ingly natural domestic episodes which, as stated
above, have become, as it were, a characteristic
of Mr. Harcourt’s most recent phase; there
is nothing that smacks of the studio about this
scene, which was evidently painted under the
actual conditions represented.

A few final words as to Mr. Harcourt’s art
methods. He cannot be classed as a follower
of the Academic School. After the manner of
the painter under whom he obtained his early
training and attained control over his tools
and material—like the artist who pointed to
him the way of using them intellectually, he
does not build up his pictures on a basis of
multitudinous studies. After preparing a slight
sketch of the composition and colour, he designs
the picture direct on the canvas, evolving his
idea as he proceeds. This method applies both
to subject-pictures and portrait groups. He
has found that this spontaneous method of
creation is best adapted to his temperament.

THE THAMES FROM MY TOWER
WINDOWS. BY EMILE CLAUS.*

I HAD just finished showing my pictures
to the Editor when, after a moment’s
silence, he said : “ Monsieur Claus, will
you write your impressions of the Thames
for The Studio ? ”

‘Yes,” he replied, “ I should like you to set
down for me all the things that have impressed
you while working up in your tower.”

I paused a moment to reflect and, whilst
hesitating, caught sight of my palette, my
constant friend, which suddenly appeared to
assume a frowning look and thus to reproach
me : “ What ! you hesitate ? Ungrateful one !
I who have given you so much joy, who even
here, during these long months of exile, have
been your great consolation ! Must I remind
you that, wherever you have gone, I have been
your faithful companion, in torrid heat and
bitter cold ? Even when I was almost frozen,
you still sought my help to fix the delicate shades
of the snow, the sombre hues of winter.” Then
my brushes also joined in a chorus of reproaches.

“ That is all very true,” I hastened to reply,
“ but be not upset, dear companion. Fear
nothing from ‘ Madame la Plume,’ I am no
worshipper at her shrine. Give me but one
day’s liberty and to-morrow we shall be together
again.”

Calm being thus restored, I agreed to en-
deavour to write down what I had seen from
my tower windows.

To my left lies Blackfriars Bridge and far
away on the horizon is the Tower Bridge ; on
the right I see Waterloo Bridge and the sil-
houette of Westminster. Those are the vistas
that, day by day during the past months, have
provided me with the varied and entrancing
impressions of the river. Oh, how wonderful
is the play of light produced on certain days
by this London atmosphere, with its myriads
of reflections in the water ! Never do I weary
in my admiration of this enchanting river with
its constantly unfolding marvels. Often it

* The distinguished Belgian landscape painter is
shortly having an exhibition of his Thames paintings
at the Goupil Gallery (Messrs. Marchant and Co.),

5 Regent Street, and the reproductions accompanying
this article belong to this series.