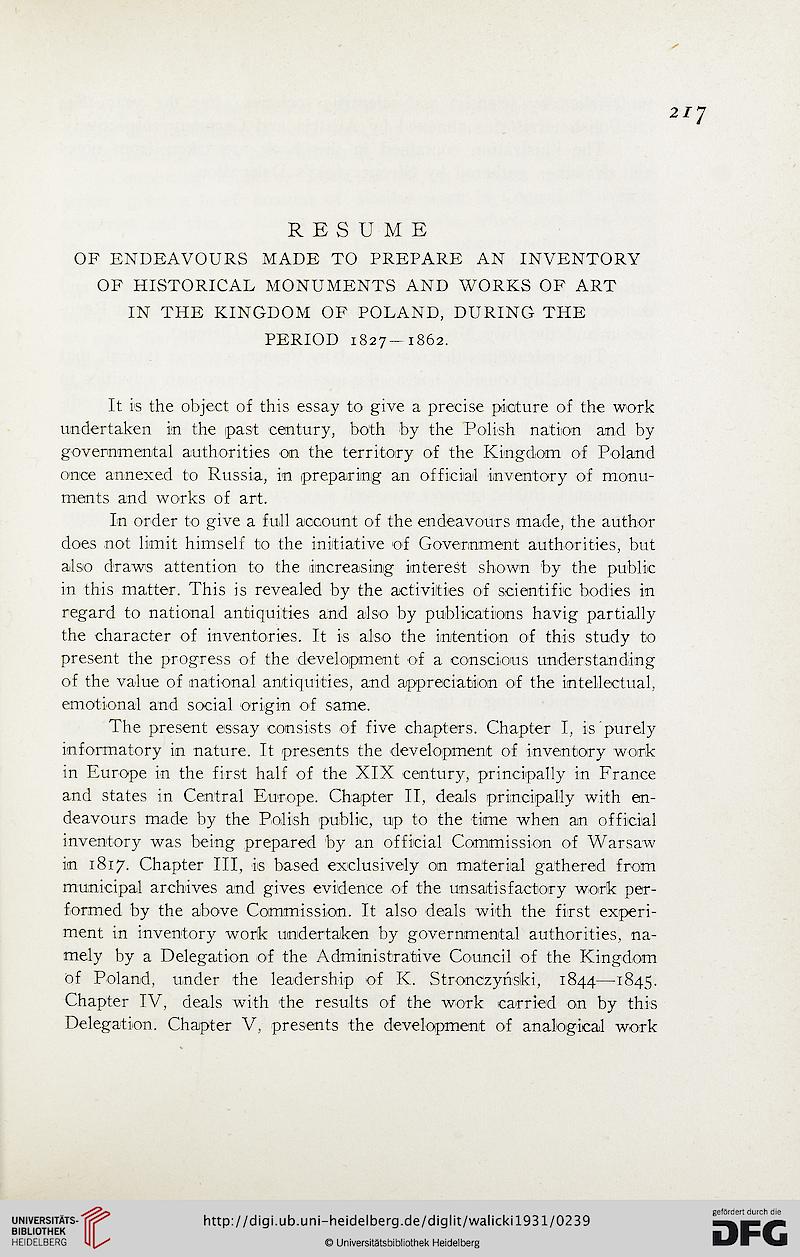 RESUME
OF ENDEAVOURS MADE TO PREPARE AN INVENTORY
OF HISTORICAL MONUMENTS AND WORKS OF ART
IN THE KINGDOM OF POLAND, DURING THE
PERIOD 1827—1862.

It is the object of this essay to give a precise picture of the work
undertaken in the past century, both by the Polish nation and by
governmental authorities on the territory of the Kingdom of Poland
once annexed to Russia, in preparing an official inventory of monu-
ments and works of art.
In order to give a full account of the endeavours made, the author
does not limit himself to the initiative of Government authorities, but
also draws attention to the increasing interest shown by the public
in this matter. This is revealed by the activities of scientific bodies in
regard to national antiquities and also by publications havig partially
the character of inventories. It is also the intention of this study to
present the progress of the development of a conscious understanding
of the value of national antiquities, and appreciation of the intellectual,
emotional and social origin ol same.
The present essay consists of five chapters. Chapter I, is purely
informatory in nature. It presents the development of inventory work
in Europe in the first half of the XIX century, principally in France
and states in Central Europe. Chapter II, deals principally with en-
deavours made by the Polish public, up to the time when an official
inventory was being prepared by an official Commission of Warsaw
in 1817. Chapter III, is based exclusively on material gathered from
municipal archives and gives evidence of the unsatisfactory work per-
formed by the above Commission. It also deals with the first experi-
ment in inventory work undertaken by governmental authorities, na-
mely by a Delegation of the Administrative Council of the Kingdom
of Poland, under the leadership of K. Stronczyński, 1844—1845.
Chapter IV, deals with the results of the work carried on by this
Delegation. Chapter V, presents the development of analogical work