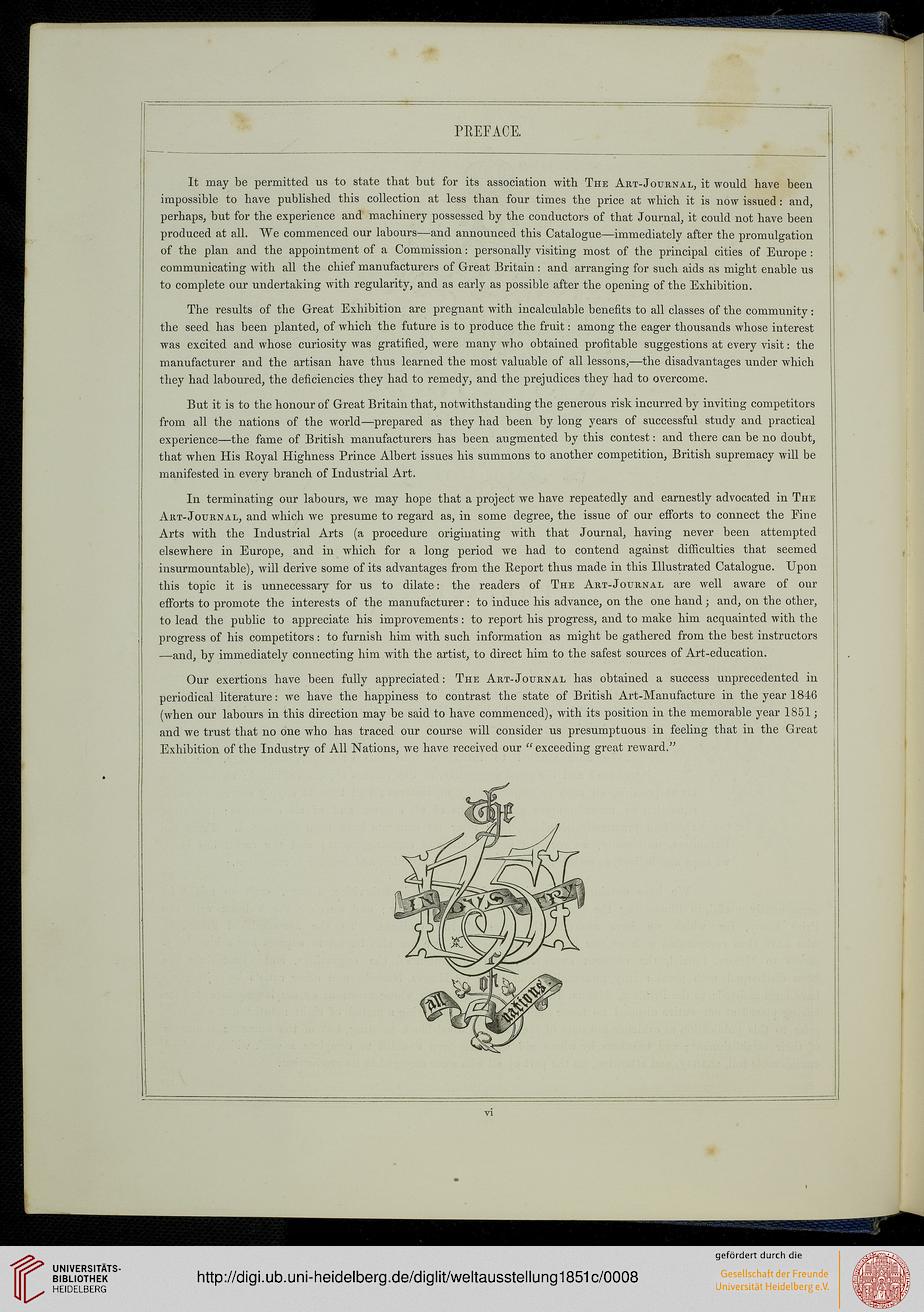 Scroll
OCR fulltext
Information about OCR text
It may be permitted us to state that but for its association with The Art-Journal, it would have been
impossible to have published this collection at less than four times the price at which it is now issued : and,
perhaps, but for the experience and machinery possessed by the conductors of that Journal, it could not have been
produced at all. We commenced our labours—and announced this Catalogue—immediately after the promulgation
of the plan and the appointment of a Commission: personally visiting most of the principal cities of Europe :
communicating with all the chief manufacturers of Great Britain : and arranging for such aids as might enable us
to complete our undertaking with regularity, and as early as possible after the opening of the Exhibition.

The results of the Great Exhibition are pregnant with incalculable benefits to all classes of the community:
the seed has been planted, of which the future is to produce the fruit: among the eager thousands whose interest
was excited and whose curiosity was gratified, were many who obtained profitable suggestions at every visit: the
manufacturer and the artisan have thus learned the most valuable of all lessons,—the disadvantages under which
they had laboured, the deficiencies they had to remedy, and the prejudices they had to overcome.

But it is to the honour of Great Britain that, notwithstanding the generous risk incurred by inviting competitors
from all the nations of the world—prepared as they had been by long years of successful study and practical
experience—the fame of British manufacturers has been augmented by this contest: and there can be no doubt,
that when His Royal Highness Prince Albert issues his summons to another competition, British supremacy will be
manifested in every branch of Industrial Art.

In terminating our labours, we may hope that a project we have repeatedly and earnestly advocated in The
Art-Journal, and which we presume to regard as, in some degree, the issue of our efforts to connect the Fine
Arts with the Industrial Arts (a procedure origiuating with that Journal, having never been attempted
elsewhere in Europe, and in which for a long period we had to contend against difficulties that seemed
insurmountable), will derive some of its advantages from the Report thus made in this Illustrated Catalogue. Upon
this topic it is unnecessary for us to dilate: the readers of The Art-Journal are well aware of our
efforts to promote the interests of the manufacturer: to induce his advance, on the one hand; and, on the other,
to lead the public to appreciate his improvements: to report his progress, and to make him acquainted with the
progress of his competitors: to furnish him with such information as might be gathered from the best instructors
—and, by immediately connecting him with the artist, to direct him to the safest sources of Art-education.

Our exertions have been fully appreciated: The Art-Journal has obtained a success unprecedented in
periodical literature: we have the happiness to contrast the state of British Art-Manufacture in the year 1846
(when our labours in this direction may be said to have commenced), with its position in the memorable year 1851;
and we trust that no one who has traced our course will consider us presumptuous in feeling that in the Great
Exhibition of the Industry of All Nations, we have received our " exceeding great reward."