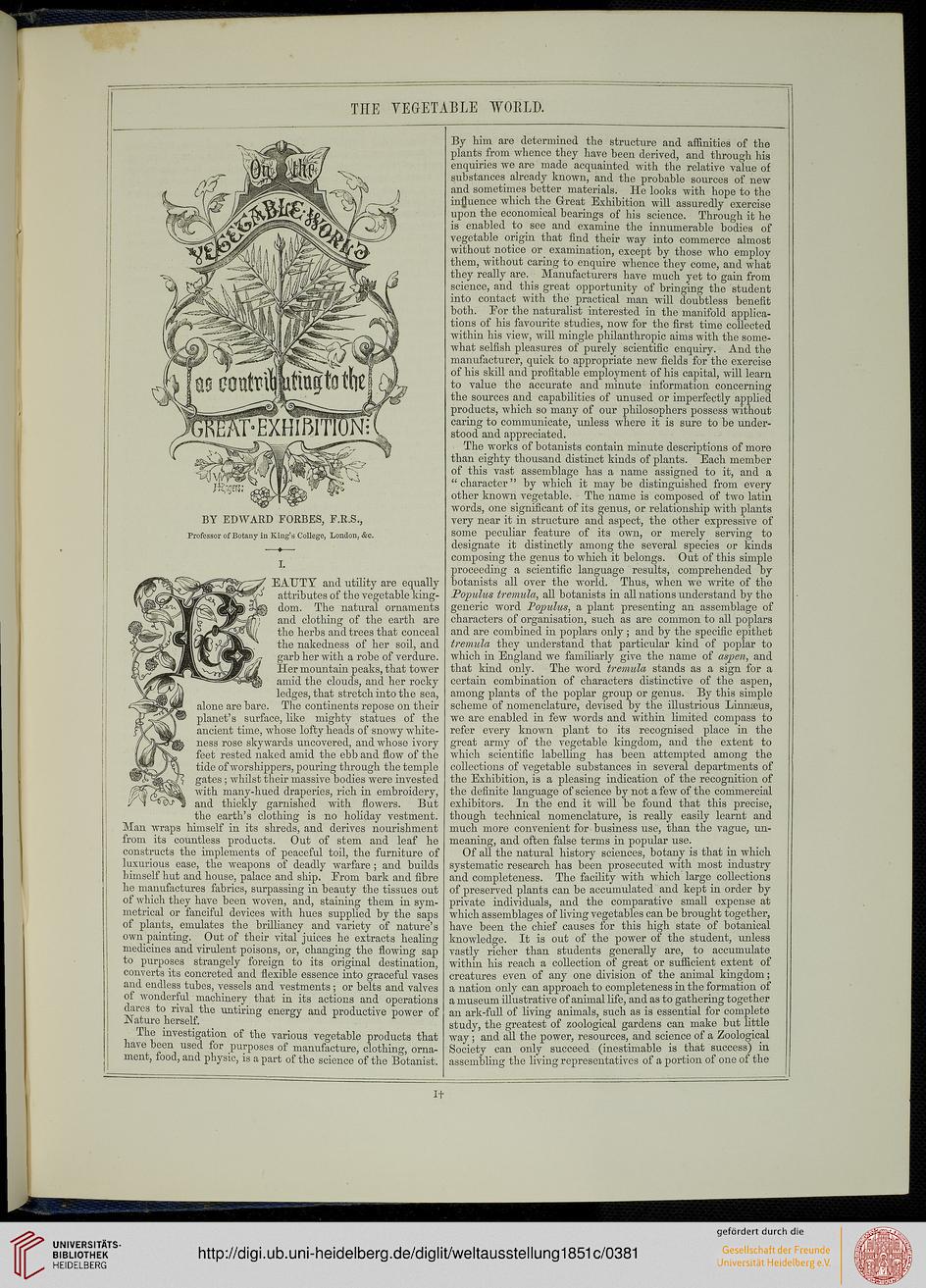 EAUTT and utility are equally
attributes of the vegetable king-
dom. The natural ornaments

and clothing of the earth

the herbs and trees that conceal
the nakedness of her soil, and
garb her with a robe of verdure.
Her mountain peaks, that tower
amid the clouds, and her rocky
ledges, that stretch into the sea,
The continents repose on their
planet's surface, like mighty statues of the
ancient time, whose lofty heads of snowy white-
ness rose skywards uncovered, and whose ivory
feet rested naked amid the ebb and flow of the
tide of worshippers, pouring through the temple
gates ; whilst their massive bodies were invested
with many-hued draperies, rich in embroidery,
and thickly garnished with flowers. But
the earth's clothing is no holiday vestment.
Man wraps himself in its shreds, and derives nourishment
from its countless products. Out of stem and leaf he
constructs the implements of peaceful toil, the furniture of
luxurious ease, the weapons of deadly warfare; and builds
himself hut and house, palace and ship. From bark and fibre
he manufactures fabrics, surpassing in beauty the tissues out
of which they have been woven, and, staining them in sym-
metrical or fanciful devices with hues supplied by the saps
of plants, emulates the brilliancy and variety of nature's
own painting. Out of their vital juices he extracts healing
medicines and virulent poisons, or, changing the flowing sap
to purposes strangely foreign to its original destination,
converts its concreted and flexible essence into graceful vases
and endless tubes, vessels and vestments ; or belts and valves
of wonderful machinery that in its actions and operations
dares to rival the untiring energy and productive power of
Nature herself.

The investigation of the various vegetable products that
have been used for purposes of manufacture, clothing, orna-
ment, food, and physic, is apart of the science of the Botanist.

By him are determined the structure and aflinities of the
plants from whence they have been derived, and through his
enquiries we are made acquainted with the relative value of
substances already known, and the probable sources of. new
and sometimes better materials. lie looks with hope to the
influence which the Great Exhibition will assuredly exercise
upon the economical bearings of his science. Through it he
is enabled to _ see and examine the innumerable bodies of
vegetable origin that find their way into commerce almost
without notice or examination, except by those who employ
them, without caring to enquire whence they come, and what
they really are. Manufacturers have much yet to gain from
science, and this great opportunity of bringing the student
into contact with the practical man will doubtless benefit
both. Eor the naturalist interested in the manifold applica-
tions of his favourite studies, now for the first time collected
within his view, will mingle philanthropic aims with the some-
what selfish pleasures of purely scientific enquiry. And the
manufacturer, quick to appropriate new fields for the exercise
of his skill and profitable employment of his capital, will learn
to value the accurate and minute information concerning
the sources and capabilities of unused or imperfectly applied
products, which so many of our philosophers possess without
caring to communicate, unless where it is sure to be under-
stood and appreciated.

The works of botanists contain minute descriptions of more
than eighty thousand distinct kinds of plants. Each member
of this vast assemblage has a name assigned to it, and a
"character" by which it may be distinguished from every
other known vegetable. The name is composed of two latin
words, one significant of its genus, or relationship with plants
very near it in structure and aspect, the other expressive of
some peculiar feature of its own, or merely serving to
designate it distinctly among the several species or kinds
composing the genus to which it belongs. Out of this simple
proceeding a scientific language results, comprehended by
botanists all over the world. Thus, when we write of the
Populus tremula, all botanists in all nations understand by the
generic word Populus, a plant presenting an assemblage of
characters of organisation, such as are common to all poplars
and are combined in poplars only ; and by the specific epithet
tremula they understand that particular kind of poplar to
which in England we familiarly give the name of aspen, and
that kind only. The word tremula stands as a sign for a
certain combination of characters distinctive of the aspen,
among plants of the poplar group or genus. By this simple
scheme of nomenclature, devised by the illustrious Linnaeus,
we are enabled in few words and within limited compass to
refer every known plant to its recognised place in the
great army of the vegetable kingdom, and the extent to
which scientific labelling has been attempted among the
collections of vegetable substances in several departments of
the Exhibition, is a pleasing indication of the recognition of
the definite language of science by not a few of the commercial
exhibitors. In the end it will be found that this precise,
though technical nomenclature, is really easily learnt and
much more convenient for business use, than the vague, un-
meaning, and often false terms in popular use.

Of all the natural history sciences, botany is that in which
systematic research has been prosecuted with most industry
and completeness. The facility with which large collections
of preserved plants can be accumulated and kept in order by
private individuals, and the comparative small expense at
which assemblages of living vegetables can be brought together,
have been the chief causes for this high state of botanical
knowledge. It is out of the power of the student, unless
vastly richer than students generally are, to accumulate
within his reach a collection of great or sufficient extent of
creatines even of any one division of the animal kingdom;
a nation only can approach to completeness in the formation of
a museum illustrative of animal life, and as to gathering together
an ark-full of living animals, such as is essential for complete
study, the greatest of zoological gardens can make but little
way; and all the power, resources, and science of a Zoological
Society can only succeed (inestimable is that success) in
assembling the living representatives of a portion of one of the