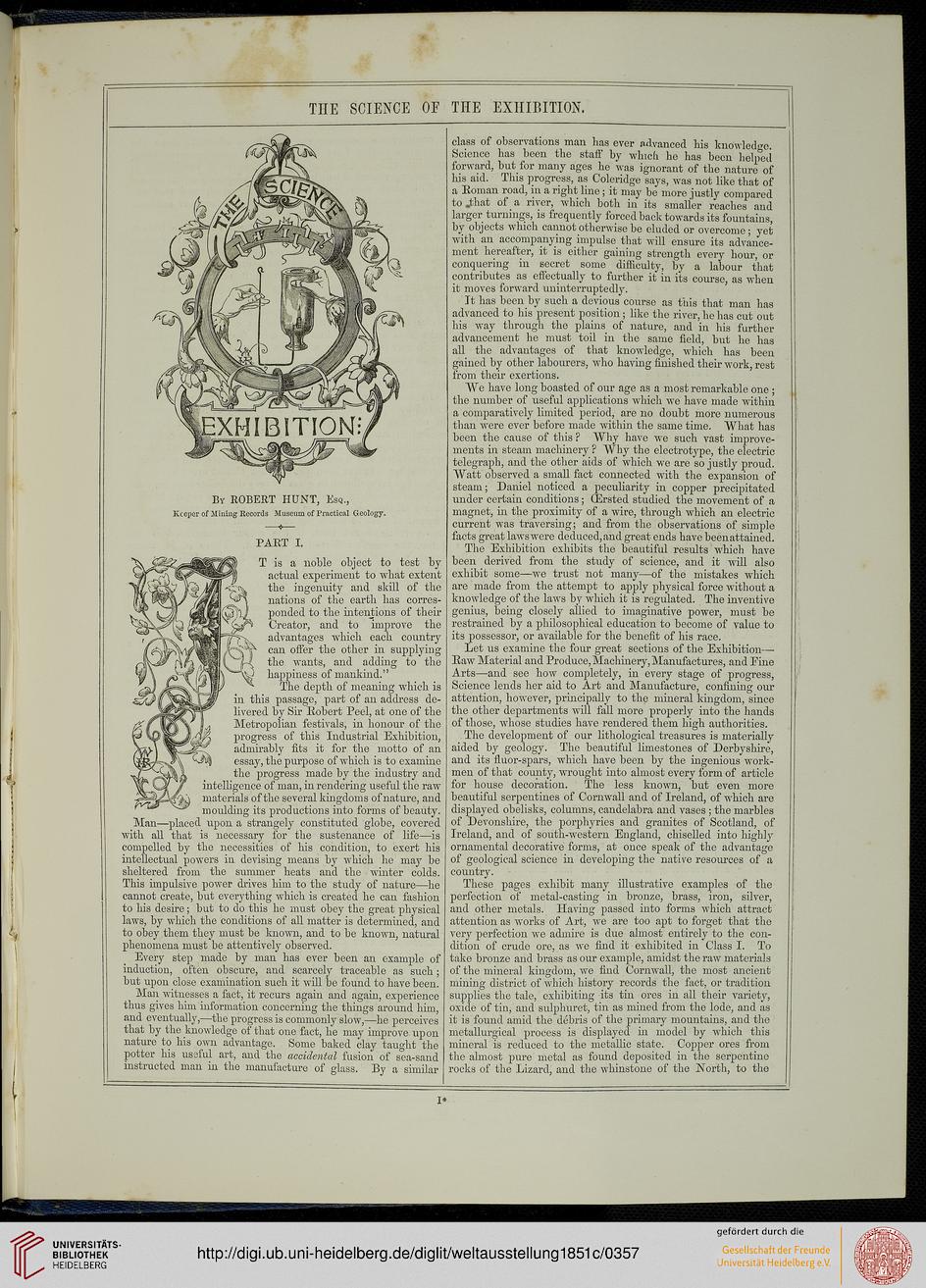 T is a noble object to test by
actual experiment to what extent
the ingenuity and skill of the
nations of the earth has corres-
ponded to the intentions of then-
Creator, and to improve the
advantages which each country
can offer the other in supplying
the wants, and adding to the
happiness of mankind."

The depth of meaning which is
in this passage, part of an address de-
livered by Sir Robert Peel, at one of the
Metropolian festivals, in honour of the
progress of this Industrial Exhibition,
admirably fits it for the motto of an
essay, the purpose of which is to examine
the progress made by the industry and
intelligence of man, in rendering useful the raw
materials of the several kingdoms of nature, and
moulding its productions into forms of beauty.
Man—placed upon a strangely constituted globe, covered
with all that is necessary for the sustenance of life—is
compelled by the necessities of his condition, to exert his
intellectual powers in devising means by which he may be
sheltered from the summer heats and the winter colds.
This impulsive power drives him to the study of nature—he
cannot create, but everything which is created he can fashion
to his desire; but to do this he must obey the great physical
laws, by which the conditions of all matter is determined, and
to obey them they must be known, and to be known, natural
phenomena must be attentively observed.

Every step made by man has ever been an example of
induction, often obscure, and scarcely traceable as such;
but upon close examination such it will be found to have been.
Man witnesses a fact, it recurs again and again, experience
thus gives him information concerning the things around him,
and eventually,—the progress is commonly slow,—he perceives
that by the knowledge of that one fact, he may improve upon
nature to his own advantage. Some baked clay taught the
potter his useful art, and the accidental fusion of sea-sand
instructed man in the manufacture of glass. By a similar

class of observations man has ever advanced his knowledge.
Science has been the staff by which he has been helped
forward, but for many ages he was ignorant of the nature of
his aid. This progress, as Coleridge says, was not like that of
a Roman road, in a right line; it may be more justly compared
to .that of a river, which both in its smaller reaches and
larger turnings, is frequently forced back towards its fountains,
by objects which cannot otherwise be eluded or overcome; yet
with an accompanying impulse that will ensure its advance-
ment hereafter, it is either gaining strength every hour, or
conquering in secret some difficulty, by a labour that
contributes as effectually to further it in its course, as when
it moves forward uninterruptedly.

It has been by such a devious course as this that man has
advanced to his present position; like the river, he has cut out
his way through the plains of nature, and in his further
advancement he must toil in the same field, but he has
all the advantages of that knowledge, which has been
gained by other labourers, who having finished their work, rest
from their exertions.

"We have long boasted of our age as a most remarkable one ;
the number of useful applications which we have made within
a comparatively limited period, are no doubt more numerous
than were ever before made within the same time. What has
been the cause of this ? Why have we such vast improve-
ments in steam machinery ? Why the electrotype, the electric
telegraph, and the other aids of which we are so justly proud.
Watt observed a small fact connected with the expansion of
steam; Daniel noticed a peculiarity in copper precipitated
under certain conditions ; (Ersted studied the movement of a
magnet, in the proximity of a wire, through which an electric
current was traversing; and from the observations of simple
facts great laws were deduced, and great ends have beenattained.

The Exhibition exhibits the beautiful results which have
been derived from the study of science, and it will also
exhibit some—we trust not many—of the mistakes which
are made from the attempt to apply physical force without a
knowledge of the laws by which it is regulated. The inventive
genius, being closely allied to imaginative power, must be
restrained by a philosophical education to become of value to
its possessor, or available for the benefit of his race.

Let us examine the four great sections of the Exhibition—
Raw Material and Produce, Machinery, Manufactures, and Fine
Arts—and see how completely, in every stage of progress,
Science lends her aid to Art and Manufacture, confining our
attention, however, principally to the mineral kingdom, since
the other departments will fall more properly into the hands
of those, whose studies have rendered them high authorities.

The development of our lithological treasures is materially
aided by geology. The beautiful limestones of Derbyshire,
and its fluor-spars, which have been by the ingenious work-
men of that county, wrought into almost every form of article
for house decoration. The less known, but even more
beautiful serpentines of Cornwall and of Ireland, of which are
displayed obelisks, columns, candelabra and vases ; the marbles
of Devonshire, the porphyries and granites of Scotland, of
Ireland, and of south-western England, chiselled into highly
ornamental decorative forms,' at once speak of the advantage
of geological science in developing the native resources of a
country.

These pages exhibit many illustrative examples of the
perfection of metal-casting in bronze, brass, iron, silver,
and other metals. Having passed into forms which attract
attention as works of Art, we are too apt to forget that the
very perfection we admire is due almost entirely to the con-
dition of crude ore, as we find it exhibited in Class I. To
take bronze and brass as our example, amidst the raw materials
of the mineral kingdom, we find Cornwall, the most ancient
mining district of which history records the fact, or tradition
supplies the tale, exhibiting its tin ores in all their variety,
oxide of tin, and sulphuret, tin as mined from the lode, and as
it is found amid the debris of the primary mountains, and the
metallurgical process is displayed in model by which this
mineral is reduced to the metallic state. Copper ores from
the almost pure metal as found deposited in the serpentine
rocks of the Lizard, and the whinstone of the North, to the