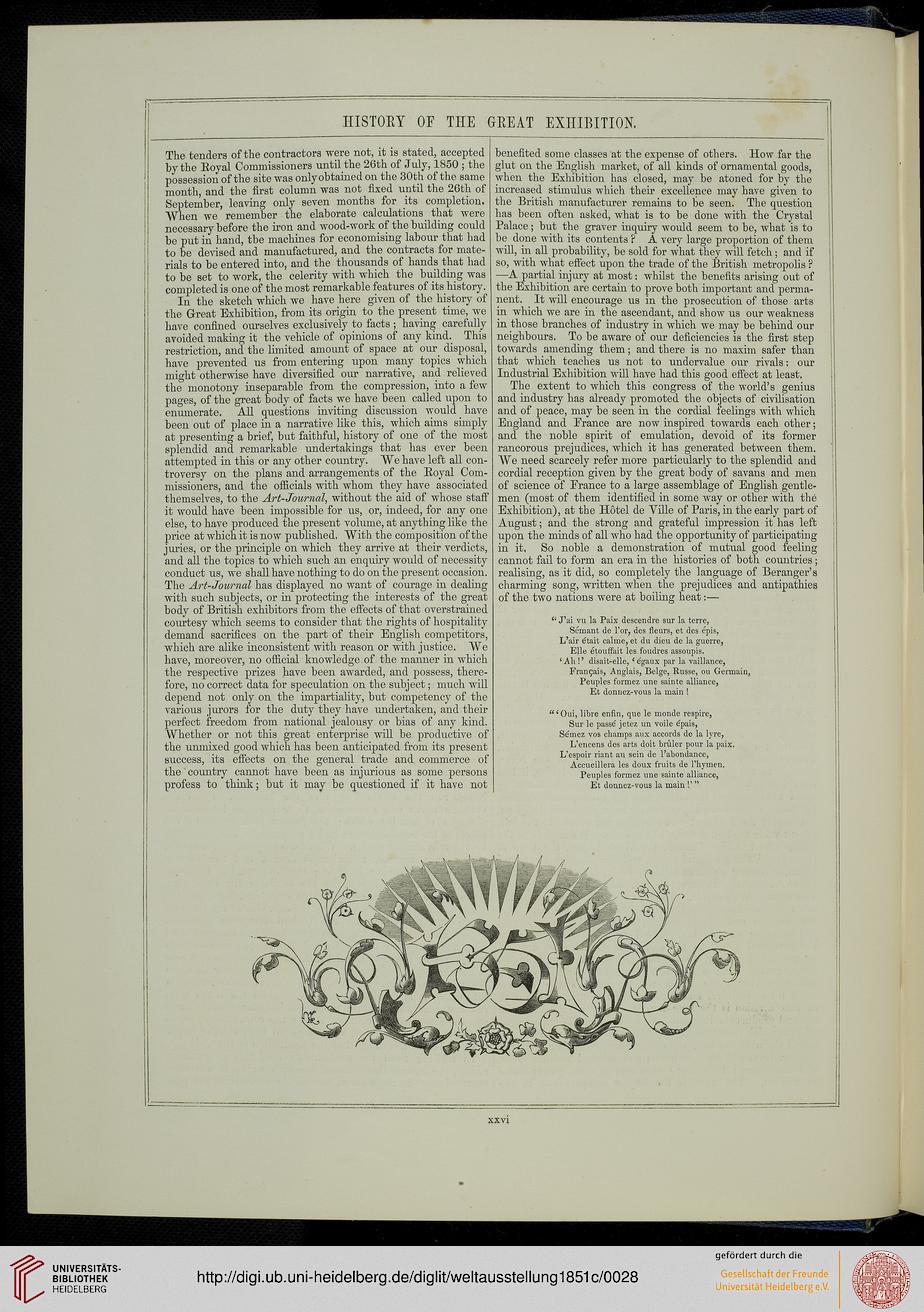 Scroll
OCR fulltext
Information about OCR text
The tenders of the contractors were not, it is stated, accepted
by the Royal Commissioners until the 26th of July, 1850 ; the
possession of the site was only obtained on the 30th of the same
month, and the first column was not fixed until the 26th of
September, leaving only seven months for its completion.
When we remember the elaborate calculations that were
necessary before the iron and wood-work of the building could
be put in hand, tbe machines for economising labour that had
to be devised and manufactured, and the contracts for mate-
rials to be entered into, and the thousands of hands that had
to be set to work, the celerity with which the building was
completed is one of the most remarkable features of its history.
In the sketch which we have here given of the history of
the Great Exhibition, from its origin to the present time, we
have confined ourselves exclusively to facts ; having carefully
avoided making it the vehicle of opinions of any kind. This
restriction, and the limited amount of space at our disposal,
have prevented us from entering upon many topics which
might otherwise have diversified our narrative, and relieved
the monotony inseparable from the compression, into a few
pages, of the great body of facts we have been called upon to
enumerate. All questions inviting discussion would have
been out of place in a narrative like this, which aims simply
at presenting a brief, but faithful, history of one of the most
splendid and remarkable undertakings that has ever been
attempted in this or any other country. We have left all con-
troversy on the plans and arrangements of the Royal Com-
missioners, and tne officials with whom they have associated
themselves, to the Art-Journal, without the aid of whose staff
it would have been impossible for us, or, indeed, for any one
else, to have produced the present volume, at anything like the
price at which it is now published. With the composition of the
juries, or the principle on which they arrive at their verdicts,
and all the topics to which such an enquiry would of necessity
conduct us, we shall have nothing to do on the present occasion.
The Art-Journal has displayed no want of courage in dealing
with such subjects, or in protecting the interests of the great
body of British exhibitors from the effects of that overstrained
courtesy which seems to consider that the rights of hospitality
demand sacrifices on the part of their English competitors,
which are alike inconsistent with reason or with justice. We
have, moreover, no official knowledge of the manner in which
the respective prizes have been awarded, and possess, there-
fore, no correct data for speculation on the subject; much will
depend not only on the impartiality, but competency of the
various jurors for the duty they have undertaken, and their
perfect freedom from national jealousy or bias of any kind.
Whether or not this great enterprise will be productive of
the unmixed good which has been anticipated from its present
success, its effects on the general trade and commerce of
the country cannot have been as injurious as some persons
profess to think; but it may be questioned if it have not

benefited some classes at the expense of others. How far the
glut on the English market, of all kinds of ornamental goods,
when the Exhibition has closed, may be atoned for by the
increased stimulus which their excellence may have given to
the British manufacturer remains to be seen. The question
has been often asked, what is to be done with the Crystal
Palace; but the graver inquiry would seem to be, what is to
be done with its contents ? A very large proportion of them
will, in all probability, be sold for what they will fetch; and if
so, with what effect upon the trade of the British metropolis ?
—A partial injury at most: whilst the benefits arising out of
the Exhibition are certain to prove both important and perma-
nent. It will encourage us in the prosecution of those arts
in which we are in the ascendant, and show us our weakness
in those branches of industry in which we may be behind our
neighbours. To be aware of our deficiencies is the first step
towards amending them; and there is no maxim safer than
that which teaches us not to undervalue our rivals: our
Industrial Exhibition will have had this good effect at least.

The extent to which this congress of the world's genius
and industry has already promoted the objects of civilisation
and of peace, may be seen in the cordial feelings with which
England and Erance are now inspired towards each other;
and the noble spirit of emulation, devoid of its former
rancorous prejudices, which it has generated between them.
We need scarcely refer more particularly to the splendid and
cordial reception given by the great body of savans and men
of science of Erance to a large assemblage of English gentle-
men (most of them identified in some way or other with the
Exhibition), at the Hotel de Ville of Paris, in the early part of
August; and the strong and grateful impression it has left
upon the minds of all who had the opportunity of participating
in it. So noble a demonstration of mutual good feeling
cannot fail to form an era in the histories of both countries;
realising, as it did, so completely the language of Beranger's
charming song, written when the prejudices and antipathies
of the two nations were at boiling heat:—