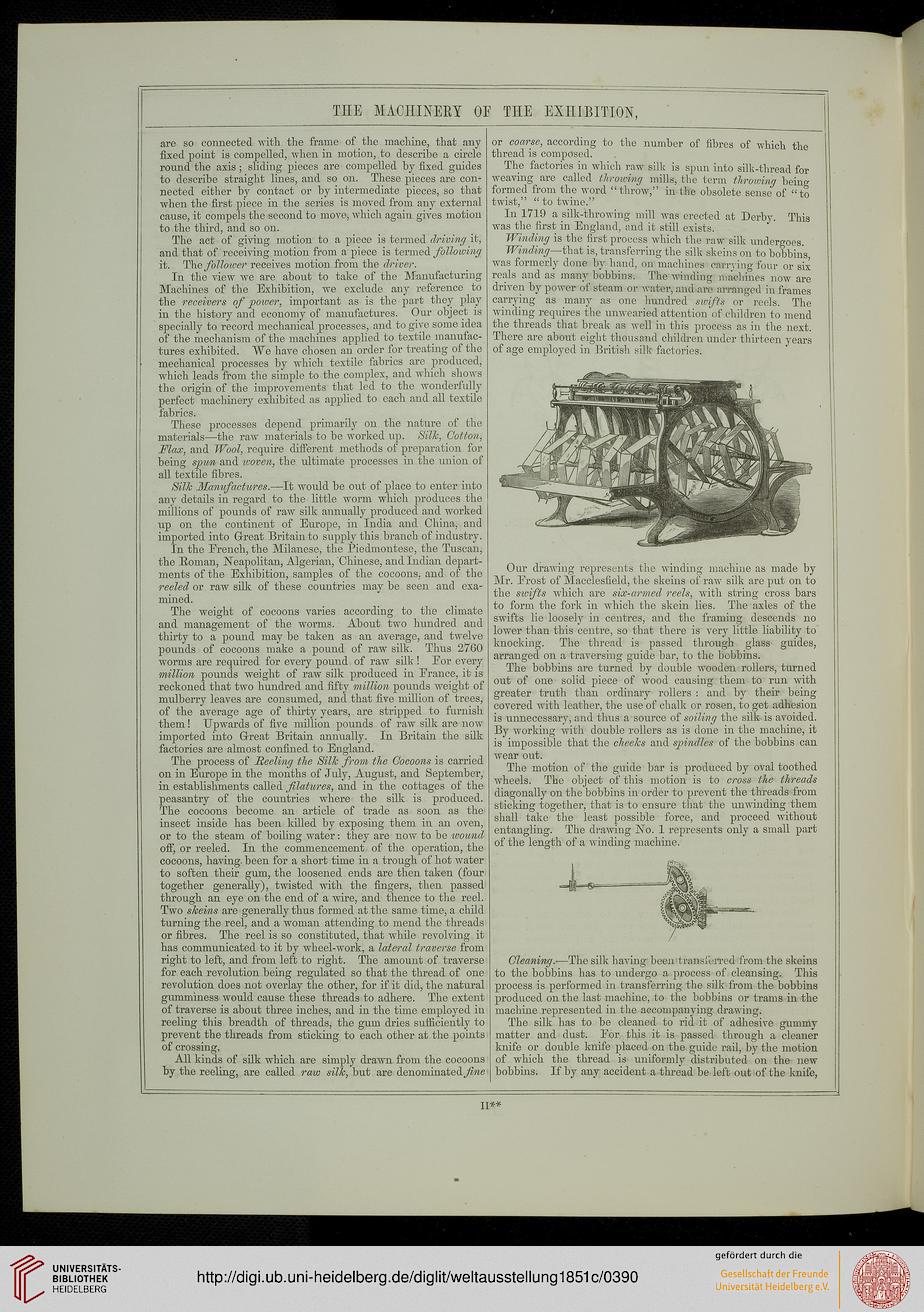 are so connected with the frame of the machine, that any
fixed point is compelled, when in motion, to describe a circle
round the axis ; sliding pieces are compelled by fixed guides
to describe straight lines, and so on. These pieces are con-
nected either by contact or by intermediate pieces, so that
when the first piece in the series is moved from any external
cause, it compels the second to move, which again gives motion
to the third, and so on.

In the view we are about to take of the Manufacturing
Machines of the Exhibition, we exclude any reference to
the receivers of poiver, important as is the part they play
in the history and economy of manufactures. Our object is
specially to record mechanical processes, and to give some idea
of the mechanism of the machines applied to textile manufac-
tures exhibited. We have chosen an order for treating of the
mechanical processes by which textile fabrics are produced,
which leads from the simple to the complex, and which shows
the origin of the improvements that led to the wonderfully
perfect machinery exhibited as applied to each and all textile
fabrics.

These processes depend primarily on the nature of the
materials—the raw materials to be worked up. Silk, Cotton,
Flax, and Wool, require different methods of preparation for
being spun and ivoven, the ultimate processes in the union of
all textile fibres.

Silk Manufactures.—It would be out of place to enter into
any details in regard to the little worm which produces the
millions of pounds of raw silk annually produced and worked
up on the continent of Europe, in India and China, and
imported into Great Britain to supply this branch of industry.

In the French, the Milanese, the Piedmontese, the Tuscan,
the Roman, Neapolitan, Algerian, Chinese, and Indian depart-
ments of the Exhibition, samples of the cocoons, and of the
reeled or raw silk of these countries may be seen and exa-
mined.

The weight of cocoons varies according to the climate
and management of the worms. About two hundred and
thirty to a pound may be taken as an average, and twelve
pounds of cocoons make a pound of raw silk. Thus 2760
worms are required for every pound of raw silk ! Eor every
million pounds weight of raw silk produced in Erance, it is
reckoned that two hundred and fifty million pounds weight of
mulberry leaves are consumed, and that five million of trees,
of the average age of thirty years, are stripped to furnish
them! Upwards of five million pounds of raw silk are now
imported into Great Britain annually. In Britain the silk
factories are almost confined to England.

The process of Reeling the Silk from the Cocoons is carried
on in Europe in the months of July, August, and September,
in establishments called filatures, and in the cottages of the
peasantry of the countries where the silk is produced.
The cocoons become an article of trade as soon as the'
insect inside has been killed by exposing them in an oven,
or to the steam of boiling water: they are now to be wound
off, or reeled. In the commencement of the operation, the
cocoons, having- been for a short time in a trough of hot water
to soften their gum, the loosened ends are then taken (four
together generally), twisted with the fingers, then passed
through an eye on the end of a wire, and thence to the reel.
Two skeins are generally thus formed at the same time, a child
turning the reel, and a woman attending to mend the threads
or fibres. The reel is so constituted, that while revolving it
has communicated to it by wheel-work, a lateral traverse from
right to left, and from left to right. The amount of traverse
for each revolution being regulated so that the thread of one
revolution does not overlay the other, for if it did, the natural
gumminess would cause these threads to adhere. The extent
of traverse is about three inches, and in the time employed in
reeling this breadth of threads, the gum dries sufficiently to
prevent the threads from sticking to each other at the points
of crossing.

All kinds of silk which are simply drawn from the cocoons
by the reeling, are called raw silk, but are denominated fine

or coarse, according to the number of fibres of which the
thread is composed.

The factories in which raw silk is spun into silk-thread for
weaving are called throwing mills, the term throwing being
formed from the word "throw," in the obsolete sense of "to
twist," "to twine."

In 1719 a silk-throwing mill was erected at Derby. This
was the first in England, and it still exists.

Winding is the first process which the raw silk undergoes

Winding—that is, transferring the silk skeins on to bobbins
was formerly clone by hand, on machines carrying four or six
reals and as many bobbins. The winding machines now are
driven by power of steam or water, and are arranged in frames
carrying as many as one hundred swifts or reels. The
winding requires the unwearied attention of children to mend
the threads that break as well in this process as in the next.
There are about eight thousand children under thirteen years
of age employed in British silk factories.

Our drawing represents the winding machine as made by
Mr. Erost of Macclesfield, the skeins of raw silk are put on to
the sivifts Avhich are six-armed reels, with string cross bars
to form the fork in which the skein lies. The axles of the
swifts lie loosely in centres, and the framing descends no
lower than this centre, so that there is very little liability to
knocking. The thread is passed through glass guides,
arranged on a traversing guide bar, to the bobbins.

The bobbins are turned by double wooden rollers, turned
out of one solid piece of wood causing them to run with
greater truth than ordinary rollers : and by their being
covered with leather, the use of chalk or rosen, to get adhesion
is unnecessary, and thus a source of soiling the silk is avoided.
By working with double rollers as is done in the machine, it
is impossible that the cheeks and spindles of the bobbins can
wear out.

The motion of the guide bar is produced by oval toothed
wheels. The object of this motion is to cross the threads
diagonally on the bobbins in order to prevent the threads from
sticking together, that is to ensure that the unwinding them
shall take the least possible force, and proceed without
entangling. The drawing No. 1 represents only a small part
of the length of a winding machine.

Cleaning.-—The sills having been'transferred from the skeins
to the bobbins has to undergo a process of cleansing. This
process is performed in transferring the silk from the bobbins
produced, on the last machine, to the bobbins or trams in the
machine represented in the accompanying drawing.

The silk has to be cleaned to rid it of adhesive gummy
matter and dust. Eor this it is passed through a cleaner
knife or double knife placed on the guide rail, by the motion
of which the thread is uniformly distributed on the new
bobbins. If by any accident a thread be left out of the knife,