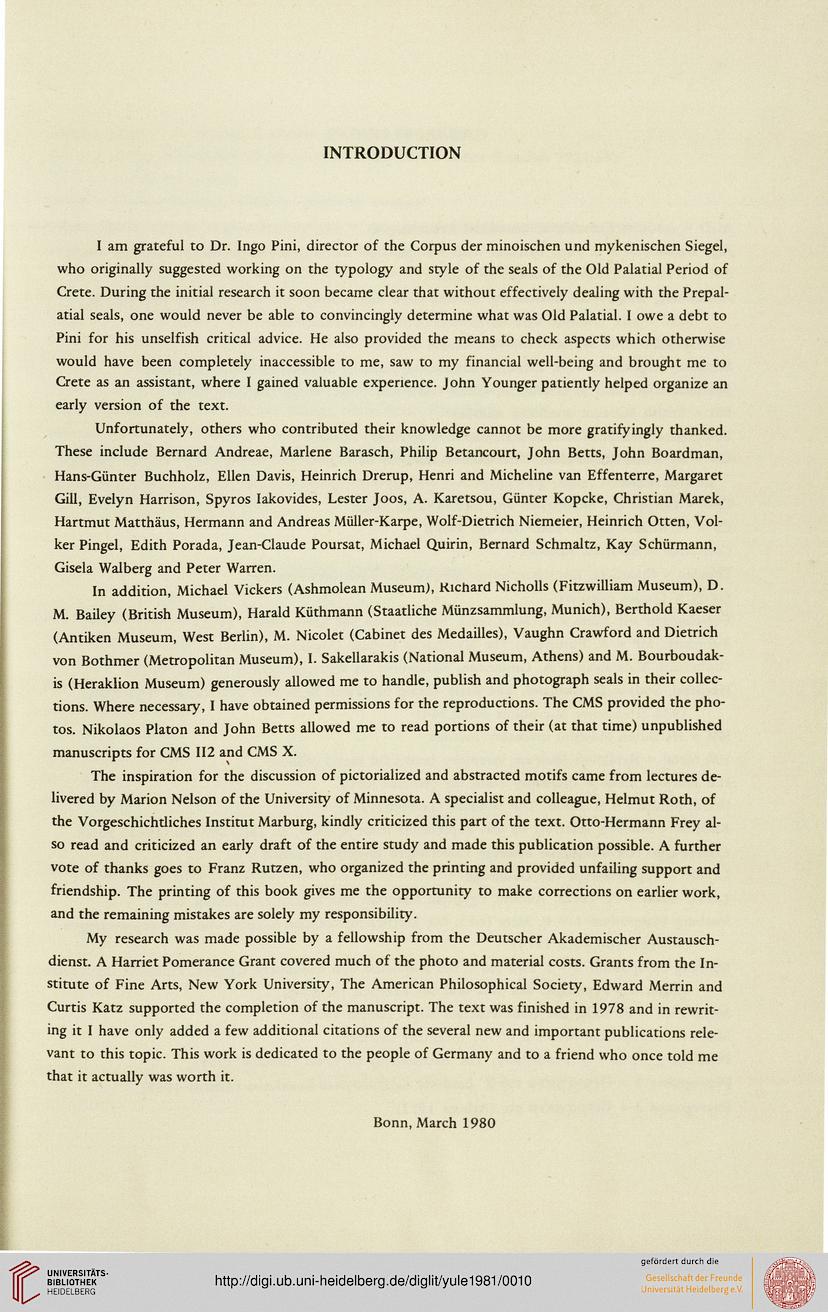 I am grateful to Dr. Ingo Pini, director of the Corpus der minoischen und mykenischen Siegel,
who originally suggested working on the typology and style of the seals of the Old Palatial Period of
Crete. During the initial research it soon became clear that without effectively dealing with the Prepal-
atial seals, one would never be able to convincingly determine what was Old Palatial. I owe a debt to
Pini for his unselfish critical advice. He also provided the means to check aspects which otherwise
would have been completely inaccessible to me, saw to my financial well-being and brought me to
Crete as an assistant, where I gained valuable experience. John Younger patiently helped organize an
early version of the text.

The inspiration for the discussion of pictorialized and abstracted motifs came from lectures de-
livered by Marion Nelson of the University of Minnesota. A specialist and colleague, Helmut Roth, of
the Vorgeschichtliches Institut Marburg, kindly criticized this part of the text. Otto-Hermann Frey al-
so read and criticized an early draft of the entire study and made this publication possible. A further
vote of thanks goes to Franz Rutzen, who organized the printing and provided unfailing support and
friendship. The printing of this book gives me the opportunity to make corrections on earlier work,
and the remaining mistakes are solely my responsibility.

My research was made possible by a fellowship from the Deutscher Akademischer Austausch-
dienst. A Harriet Pomerance Grant covered much of the photo and material costs. Grants from the In-
stitute of Fine Arts, New York University, The American Philosophical Society, Edward Merrin and
Curtis Katz supported the completion of the manuscript. The text was finished in 1978 and in rewrit-
ing it I have only added a few additional citations of the several new and important publications rele-
vant to this topic. This work is dedicated to the people of Germany and to a friend who once told me
that it actually was worth it.