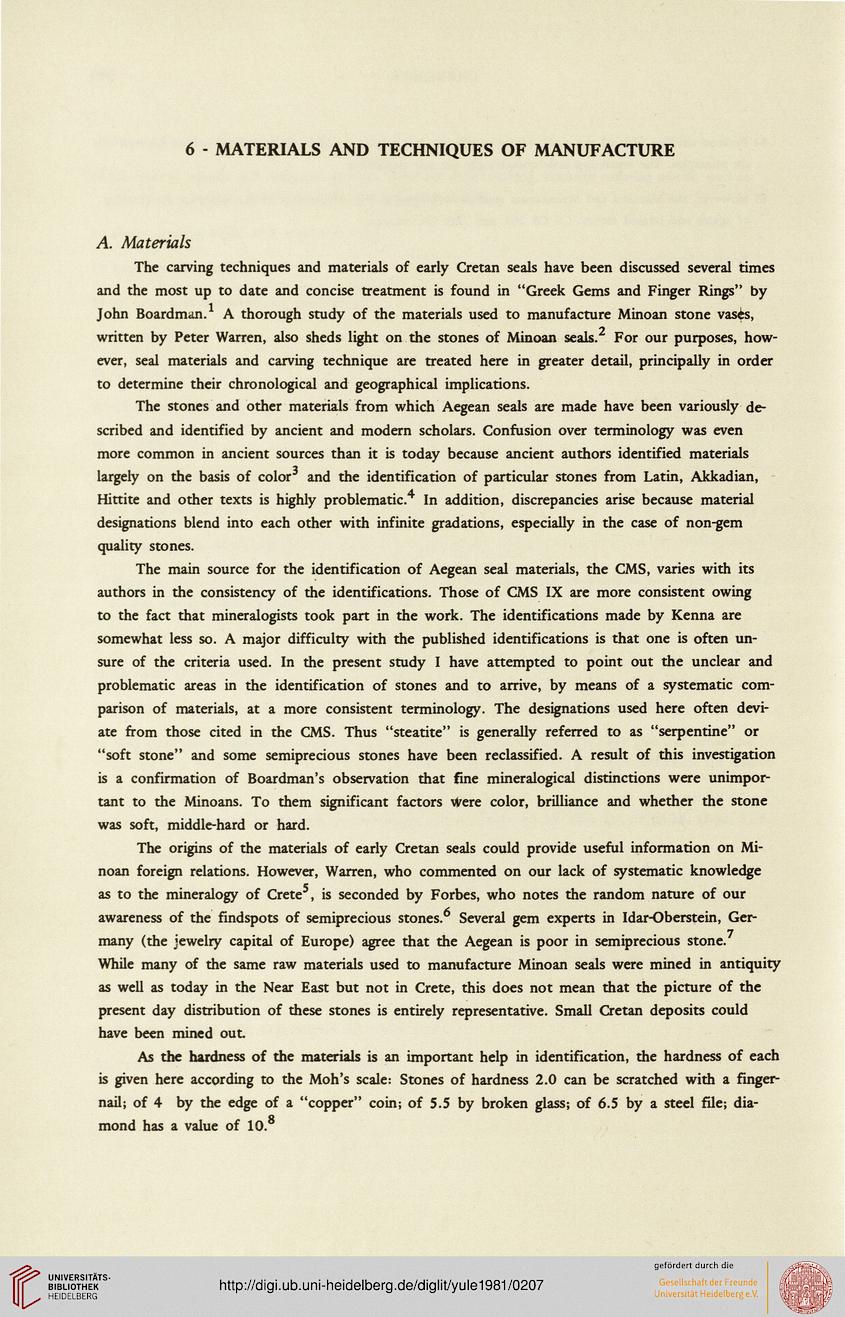 The carving techniques and materials of early Cretan seals have been discussed several times
and the most up to date and concise treatment is found in "Greek Gems and Finger Rings" by
John Boardman. A thorough study of the materials used to manufacture Minoan stone vasis,
written by Peter Warren, also sheds light on the stones of Minoan seals.2 For our purposes, how-
ever, seal materials and carving technique are treated here in greater detail, principally in order
to determine their chronological and geographical implications.

The stones and other materials from which Aegean seals are made have been variously de-
scribed and identified by ancient and modern scholars. Confusion over terminology was even
more common in ancient sources than it is today because ancient authors identified materials
largely on the basis of color and the identification of particular stones from Latin, Akkadian,
Hittite and other texts is highly problematic. In addition, discrepancies arise because material
designations blend into each other with infinite gradations, especially in the case of non-gem
quality stones.

The main source for the identification of Aegean seal materials, the CMS, varies with its
authors in the consistency of the identifications. Those of CMS IX are more consistent owing
to the fact that mineralogists took part in the work. The identifications made by Kenna are
somewhat less so. A major difficulty with the published identifications is that one is often un-
sure of the criteria used. In the present study I have attempted to point out the unclear and
problematic areas in the identification of stones and to arrive, by means of a systematic com-
parison of materials, at a more consistent terminology. The designations used here often devi-
ate from those cited in the CMS. Thus "steatite" is generally referred to as "serpentine" or
"soft stone" and some semiprecious stones have been reclassified. A result of this investigation
is a confirmation of Boardman's observation that fine mineralogical distinctions were unimpor-
tant to the Minoans. To them significant factors were color, brilliance and whether the stone
was soft, middle-hard or hard.

The origins of the materials of early Cretan seals could provide useful information on Mi-
noan foreign relations. However, Warren, who commented on our lack of systematic knowledge
as to the mineralogy of Crete , is seconded by Forbes, who notes the random nature of our
awareness of the findspots of semiprecious stones.6 Several gem experts in Idar-Oberstein, Ger-
many (the jewelry capital of Europe) agree that the Aegean is poor in semiprecious stone.
While many of the same raw materials used to manufacture Minoan seals were mined in antiquity
as well as today in the Near East but not in Crete, this does not mean that the picture of the
present day distribution of these stones is entirely representative. Small Cretan deposits could
have been mined out.

As the hardness of the materials is an important help in identification, the hardness of each
is given here according to the Moh's scale: Stones of hardness 2.0 can be scratched with a finger-
nail; of 4 by the edge of a "copper" coin; of 5.5 by broken glass; of 6.5 by a steel file; dia-
mond has a value of 10.