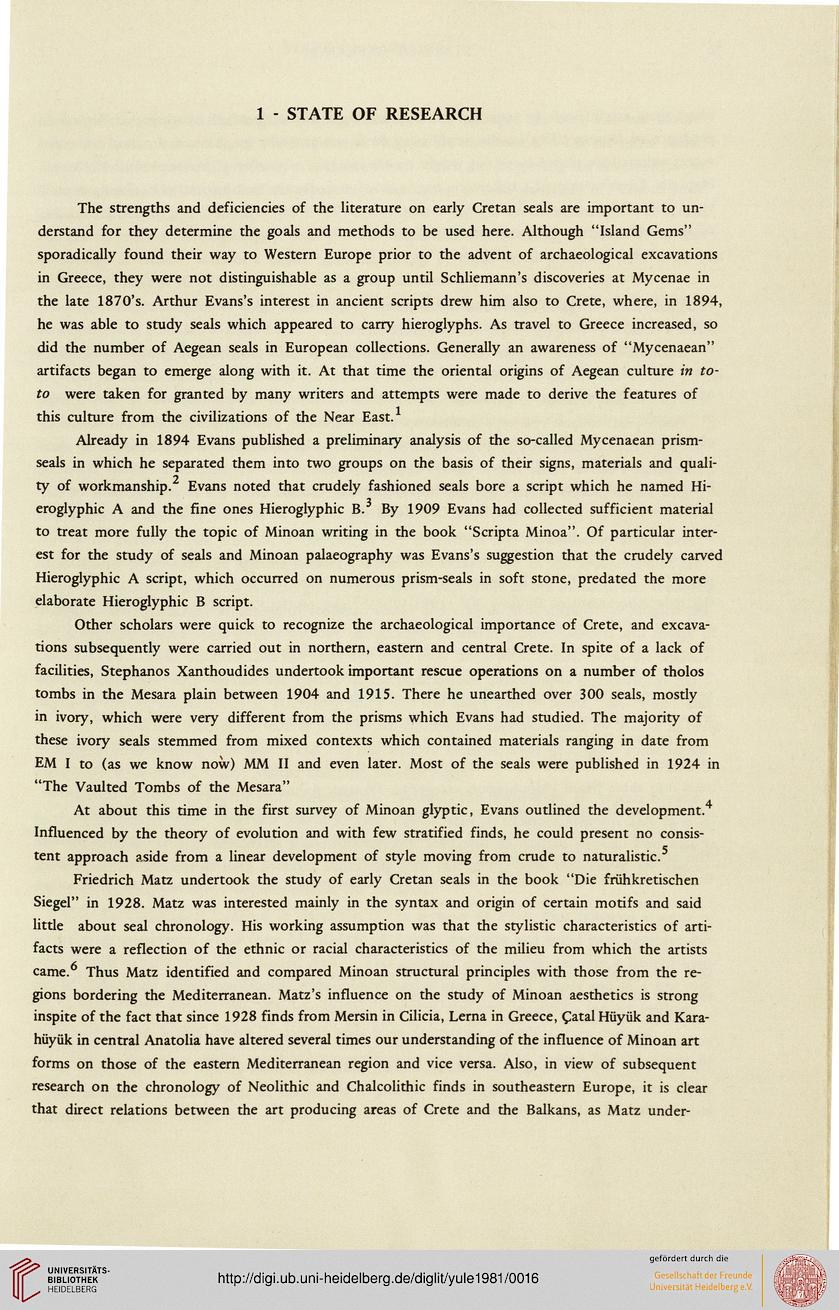 The strengths and deficiencies of the literature on early Cretan seals are important to un-
derstand for they determine the goals and methods to be used here. Although "Island Gems"
sporadically found their way to Western Europe prior to the advent of archaeological excavations
in Greece, they were not distinguishable as a group until Schliemann's discoveries at Mycenae in
the late 1870's. Arthur Evans's interest in ancient scripts drew him also to Crete, where, in 1894,
he was able to study seals which appeared to carry hieroglyphs. As travel to Greece increased, so
did the number of Aegean seals in European collections. Generally an awareness of "Mycenaean"
artifacts began to emerge along with it. At that time the oriental origins of Aegean culture in to-
to were taken for granted by many writers and attempts were made to derive the features of
this culture from the civilizations of the Near East.

Already in 1894 Evans published a preliminary analysis of the so-called Mycenaean prism-
seals in which he separated them into two groups on the basis of their signs, materials and quali-
ty of workmanship. Evans noted that crudely fashioned seals bore a script which he named Hi-
eroglyphic A and the fine ones Hieroglyphic B. By 1909 Evans had collected sufficient material
to treat more fully the topic of Minoan writing in the book "Scripta Minoa". Of particular inter-
est for the study of seals and Minoan palaeography was Evans's suggestion that the crudely carved
Hieroglyphic A script, which occurred on numerous prism-seals in soft stone, predated the more
elaborate Hieroglyphic B script.

Other scholars were quick to recognize the archaeological importance of Crete, and excava-
tions subsequently were carried out in northern, eastern and central Crete. In spite of a lack of
facilities, Stephanos Xanthoudides undertook important rescue operations on a number of tholos
tombs in the Mesara plain between 1904 and 1915. There he unearthed over 300 seals, mostly
in ivory, which were very different from the prisms which Evans had studied. The majority of
these ivory seals stemmed from mixed contexts which contained materials ranging in date from
EM I to (as we know now) MM II and even later. Most of the seals were published in 1924 in
"The Vaulted Tombs of the Mesara"

At about this time in the first survey of Minoan glyptic, Evans outlined the development.
Influenced by the theory of evolution and with few stratified finds, he could present no consis-
tent approach aside from a linear development of style moving from crude to naturalistic.

Friedrich Matz undertook the study of early Cretan seals in the book "Die friihkretischen
Siegel" in 1928. Matz was interested mainly in the syntax and origin of certain motifs and said
little about seal chronology. His working assumption was that the stylistic characteristics of arti-
facts were a reflection of the ethnic or racial characteristics of the milieu from which the artists
came. Thus Matz identified and compared Minoan structural principles with those from the re-
gions bordering the Mediterranean. Matz's influence on the study of Minoan aesthetics is strong
inspite of the fact that since 1928 finds from Mersin in Cilicia, Lerna in Greece, £atal Hiiyiik and Kara-
hiiyuk in central Anatolia have altered several times our understanding of the influence of Minoan art
forms on those of the eastern Mediterranean region and vice versa. Also, in view of subsequent
research on the chronology of Neolithic and Chalcolithic finds in southeastern Europe, it is clear
that direct relations between the art producing areas of Crete and the Balkans, as Matz under-