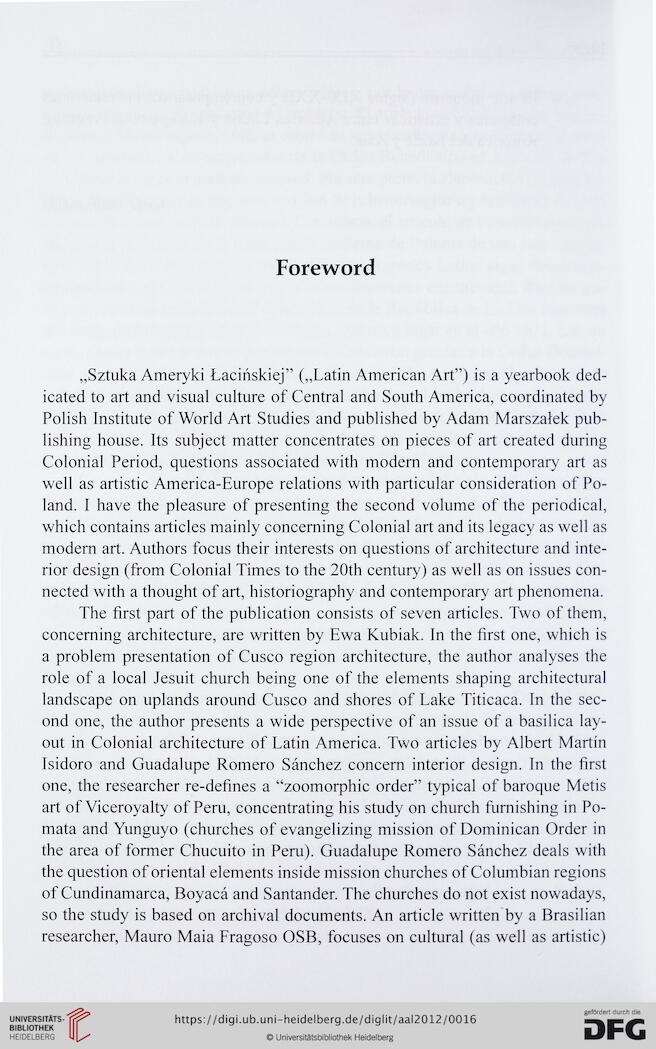 „Sztuka Ameryki Łacińskiej” („Latin American Art”) is a yearbook ded-
icated to art and visual culture of Central and South America, coordinated by
Polish Institute of World Art Studies and published by Adam Marszałek pub-
lishing house. Its subject matter concentrates on pieces of art created during
Colonial Period, questions associated with modem and contemporary art as
well as artistic America-Europe relations with particular consideration of Po-
land. I have the pleasure of presenting the second volume of the periodical,
which contains articles mainly concerning Colonial art and its legacy as well as
modem art. Authors focus their interests on questions of architecture and inte-
rior design (from Colonial Times to the 20th century) as well as on issues con-
nected with a thought of art, historiography and contemporary art phenomena.
The first part of the publication consists of seven articles. Two of them,
concerning architecture, are written by Ewa Kubiak. In the first one, which is
a problem presentation of Cusco region architecture, the author analyses the
role of a local Jesuit church being one of the elements shaping architectural
landscape on uplands around Cusco and shores of Lake Titicaca. In the sec-
ond one, the author presents a wide perspective of an issue of a basilica lay-
out in Colonial architecture of Latin America. Two articles by Albert Martin
Isidoro and Guadalupe Romero Sánchez concern interior design. In the first
one, the researcher re-defines a “zoomorphic order” typical of baroque Metis
art of Viceroyalty of Pern, concentrating his study on church furnishing in Po-
mata and Yunguyo (churches of evangelizing mission of Dominican Order in
the area of former Chucuito in Pern). Guadalupe Romero Sánchez deals with
the question of oriental elements inside mission churches of Columbian regions
of Cundinamarca, Boyacá and Santander. The churches do not exist nowadays,
so the study is based on archival documents. An article written by a Brasilian
researcher, Mauro Maia Fragoso OSB, focuses on cultural (as well as artistic)