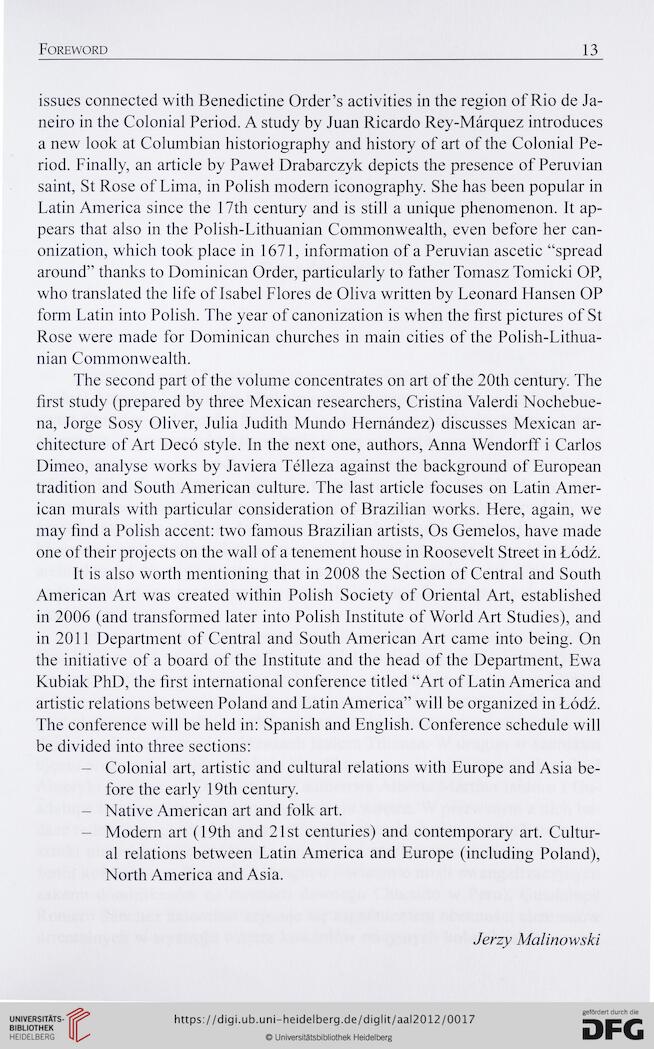 issues connected with Benedictine Order’s activities in the region of Rio de Ja-
neiro in the Colonial Period. A study by Juan Ricardo Rey-Márquez introduces
a new look at Columbian historiography and history of art of the Colonial Pe-
riod. Finally, an article by Paweł Drabarczyk depicts the presence of Peruvian
saint, St Rose of Lima, in Polish modem iconography. She has been popular in
Latin America since the 17th century and is still a unique phenomenon. It ap-
pears that also in the Polish-Lithuanian Commonwealth, even before her can-
onization, which took place in 1671, information of a Peruvian ascetic “spread
around” thanks to Dominican Order, particularly to father Tomasz Tomicki OP,
who translated the life of Isabel Flores de Oliva written by Leonard Hansen OP
form Latin into Polish. The year of canonization is when the first pictures of St
Rose were made for Dominican churches in main cities of the Polish-Lithua-
nian Commonwealth.
The second part of the volume concentrates on art of the 20th century. The
first study (prepared by three Mexican researchers, Cristina Valerdi Nochebue-
na, Jorge Sosy Oliver, Julia Judith Mundo Hernández) discusses Mexican ar-
chitecture of Art Decó style. In the next one, authors, Anna Wendorff i Carlos
Dimeo, analyse works by Javiera Télleza against the background of European
tradition and South American culture. The last article focuses on Latin Amer-
ican murals with particular consideration of Brazilian works. Here, again, we
may find a Polish accent: two famous Brazilian artists, Os Gemelos, have made
one of their projects on the wall of a tenement house in Roosevelt Street in Łódź.
It is also worth mentioning that in 2008 the Section of Central and South
American Art was created within Polish Society of Oriental Art, established
in 2006 (and transformed later into Polish Institute of World Art Studies), and
in 2011 Department of Central and South American Art came into being. On
the initiative of a board of the Institute and the head of the Department, Ewa
Kubiak PhD, the first international conference titled “Art of Latin America and
artistic relations between Poland and Latin America” will be organized in Łódź.
The conference will be held in: Spanish and English. Conference schedule will
be divided into three sections:
- Colonial art, artistic and cultural relations with Europe and Asia be-
fore the early 19th century.
- Native American art and folk art.
- Modem art (19th and 21st centuries) and contemporary art. Cultur-
al relations between Latin America and Europe (including Poland),
North America and Asia.