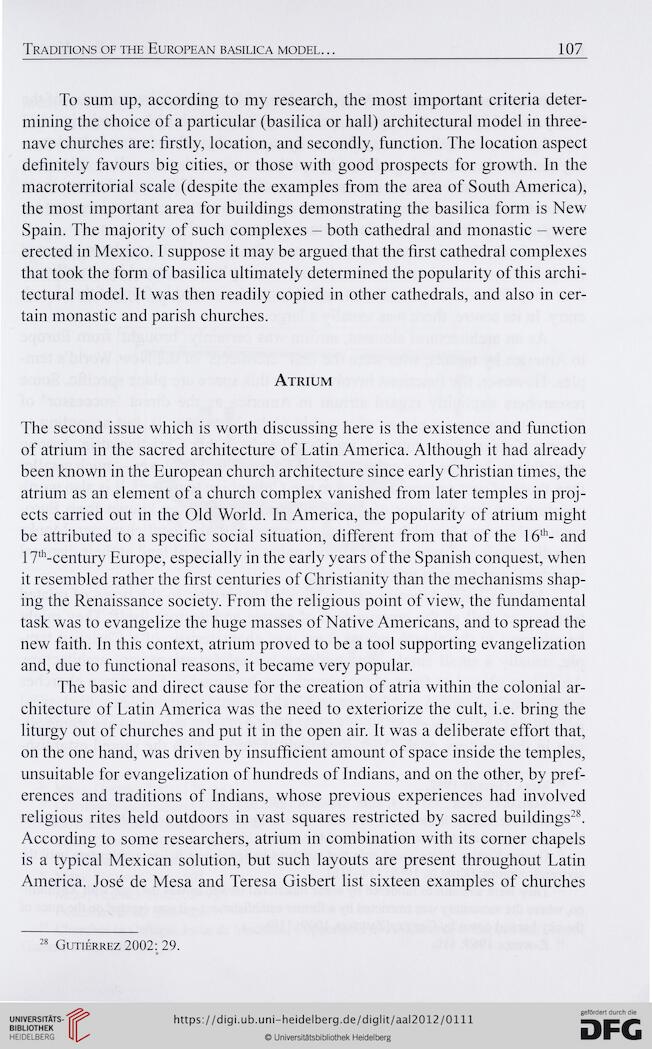 To sum up, according to my research, the most important criteria deter-
mining the choice of a particular (basilica or hall) architectural model in three-
nave churches are: firstly, location, and secondly, function. The location aspect
definitely favours big cities, or those with good prospects for growth. In the
macroterritorial scale (despite the examples from the area of South America),
the most important area for buildings demonstrating the basilica form is New
Spain. The majority of such complexes - both cathedral and monastic - were
erected in Mexico. I suppose it may be argued that the first cathedral complexes
that took the form of basilica ultimately determined the popularity of this archi-
tectural model. It was then readily copied in other cathedrals, and also in cer-
tain monastic and parish churches.
Atrium
The second issue which is worth discussing here is the existence and function
of atrium in the sacred architecture of Latin America. Although it had already
been known in the European church architecture since early Christian times, the
atrium as an element of a church complex vanished from later temples in proj-
ects carried out in the Old World. In America, the popularity of atrium might
be attributed to a specific social situation, different from that of the 16th- and
17th-century Europe, especially in the early years of the Spanish conquest, when
it resembled rather the first centuries of Christianity than the mechanisms shap-
ing the Renaissance society. From the religious point of view, the fundamental
task was to evangelize the huge masses of Native Americans, and to spread the
new faith. In this context, atrium proved to be a tool supporting evangelization
and, due to functional reasons, it became very popular.
The basic and direct cause for the creation of atria within the colonial ar-
chitecture of Latin America was the need to exteriorize the cult, i.e. bring the
liturgy out of churches and put it in the open air. It was a deliberate effort that,
on the one hand, was driven by insufficient amount of space inside the temples,
unsuitable for evangelization of hundreds of Indians, and on the other, by pref-
erences and traditions of Indians, whose previous experiences had involved
religious rites held outdoors in vast squares restricted by sacred buildings28.
According to some researchers, atrium in combination with its comer chapels
is a typical Mexican solution, but such layouts are present throughout Latin
America. José de Mesa and Teresa Gisbert list sixteen examples of churches