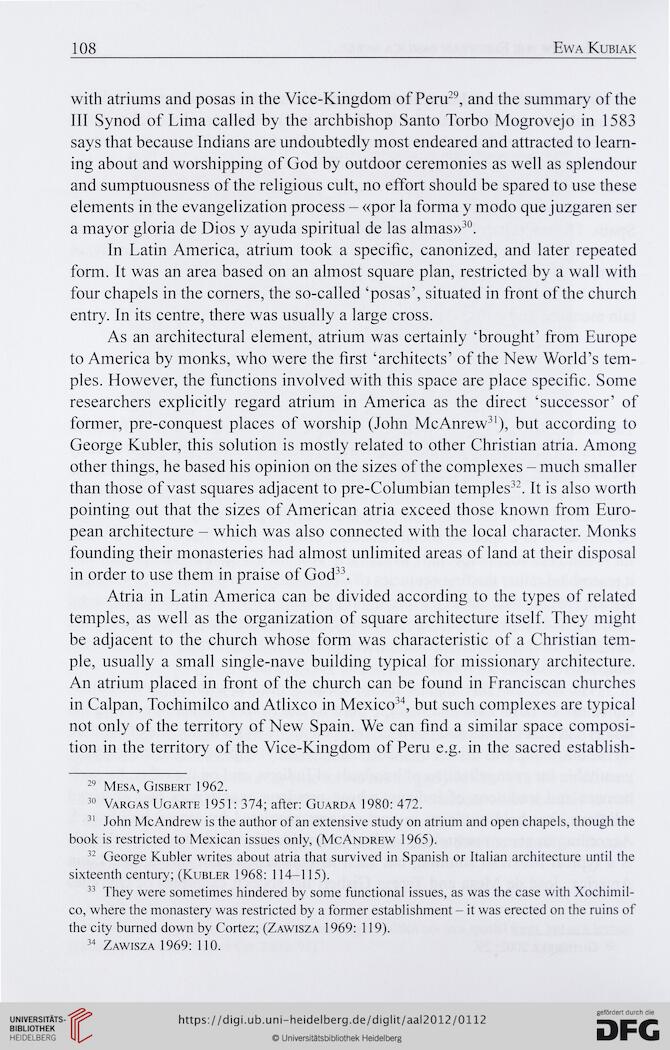 with atriums and posas in the Vice-Kingdom of Peru29, and the summary of the
III Synod of Lima called by the archbishop Santo Torbo Mogrovejo in 1583
says that because Indians are undoubtedly most endeared and attracted to learn-
ing about and worshipping of God by outdoor ceremonies as well as splendour
and sumptuousness of the religious cult, no effort should be spared to use these
elements in the evangelization process - «por la forma y modo que juzgaren ser
a mayor gloria de Dios y ayuda spiritual de las almas»30.
In Latin America, atrium took a specific, canonized, and later repeated
form. It was an area based on an almost square plan, restricted by a wall with
four chapels in the comers, the so-called ‘posas’, situated in front of the church
entry. In its centre, there was usually a large cross.
As an architectural element, atrium was certainly ‘brought’ from Europe
to America by monks, who were the first ‘architects’ of the New World’s tem-
ples. However, the functions involved with this space are place specific. Some
researchers explicitly regard atrium in America as the direct ‘successor’ of
former, pre-conquest places of worship (John McAnrew31), but according to
George Kubler, this solution is mostly related to other Christian atria. Among
other things, he based his opinion on the sizes of the complexes - much smaller
than those of vast squares adjacent to pre-Columbian temples32. It is also worth
pointing out that the sizes of American atria exceed those known from Euro-
pean architecture - which was also connected with the local character. Monks
founding their monasteries had almost unlimited areas of land at their disposal
in order to use them in praise of God33.
Atria in Latin America can be divided according to the types of related
temples, as well as the organization of square architecture itself. They might
be adjacent to the church whose form was characteristic of a Christian tem-
ple, usually a small single-nave building typical for missionary architecture.
An atrium placed in front of the church can be found in Franciscan churches
in Calpan, Tochimilco and Atlixco in Mexico34, but such complexes are typical
not only of the territory of New Spain. We can find a similar space composi-
tion in the territory of the Vice-Kingdom of Peru e.g. in the sacred establish-
29 Mesa, Gisbert 1962.
30 Vargas Ugarte 1951: 374; after: Guarda 1980: 472.
31 John McAndrew is the author of an extensive study on atrium and open chapels, though the
book is restricted to Mexican issues only, (McAndrew 1965).
32 George Kubler writes about atria that survived in Spanish or Italian architecture until the
sixteenth century; (Kubler 1968: 114-115).
33 They were sometimes hindered by some functional issues, as was the case with Xochimil-
co, where the monastery was restricted by a former establishment - it was erected on the ruins of
the city burned down by Cortez; (Zawisza 1969: 119).
34 Zawisza 1969: 110.