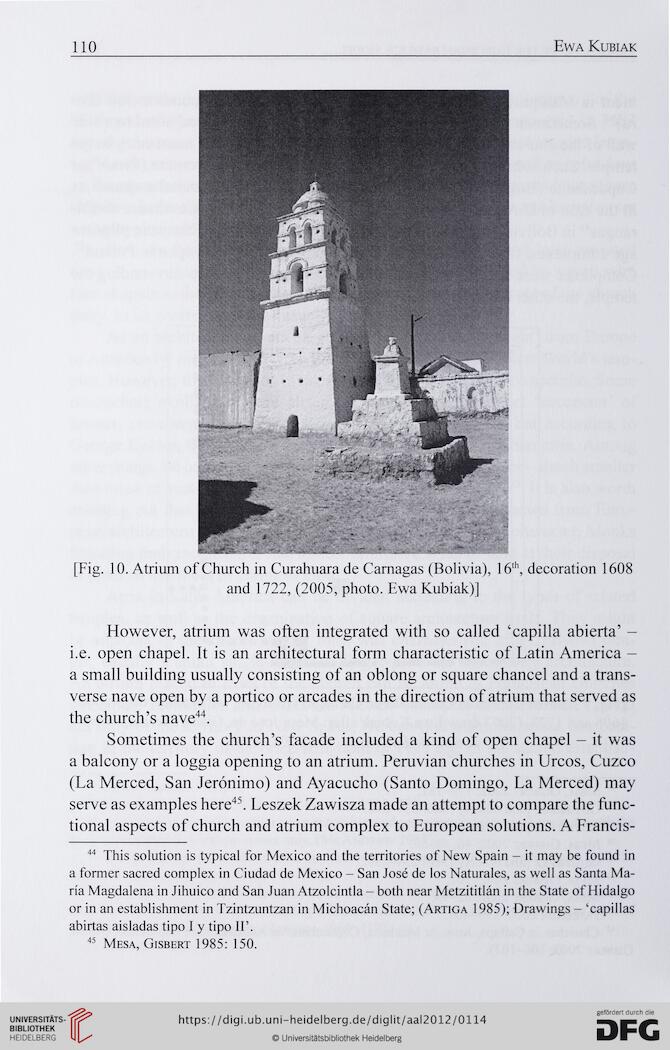 However, atrium was often integrated with so called ‘capilla abierta’ -
i.e. open chapel. It is an architectural form characteristic of Latin America -
a small building usually consisting of an oblong or square chancel and a trans-
verse nave open by a portico or arcades in the direction of atrium that served as
the church’s nave44.
Sometimes the church’s facade included a kind of open chapel - it was
a balcony or a loggia opening to an atrium. Peruvian churches in Urcos, Cuzco
(La Merced, San Jerónimo) and Ayacucho (Santo Domingo, La Merced) may
serve as examples here45. Leszek Zawisza made an attempt to compare the func-
tional aspects of church and atrium complex to European solutions. A Francis-
44 This solution is typical for Mexico and the territories of New Spain - it may be found in
a former sacred complex in Ciudad de Mexico - San José de los Naturales, as well as Santa Ma-
ria Magdalena in Jihuico and San Juan Atzolcintla - both near Metzititlán in the State of Hidalgo
or in an establishment in Tzintzuntzan in Michoacan State; (Artiga 1985); Drawings - ‘capillas
abirtas aisladas tipo I y tipo II’.
45 Mesa, Gisbert 1985: 150.