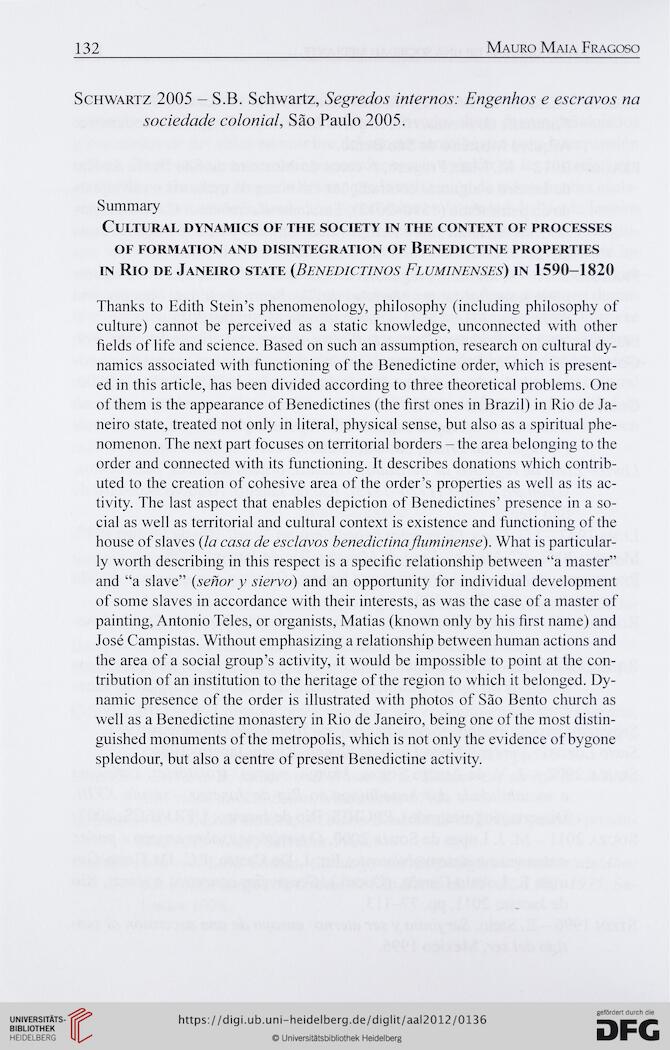 Summary
Cultural dynamics of the society in the context of processes
of formation and disintegration of Benedictine properties
in Rio de Janeiro state (Benedictinos Fluminenses) in 1590-1820
Thanks to Edith Stein’s phenomenology, philosophy (including philosophy of
culture) cannot be perceived as a static knowledge, unconnected with other
fields of life and science. Based on such an assumption, research on cultural dy-
namics associated with functioning of the Benedictine order, which is present-
ed in this article, has been divided according to three theoretical problems. One
of them is the appearance of Benedictines (the first ones in Brazil) in Rio de Ja-
neiro state, treated not only in literal, physical sense, but also as a spiritual phe-
nomenon. The next part focuses on territorial borders - the area belonging to the
order and connected with its functioning. It describes donations which contrib-
uted to the creation of cohesive area of the order’s properties as well as its ac-
tivity. The last aspect that enables depiction of Benedictines’ presence in a so-
cial as well as territorial and cultural context is existence and functioning of the
house of slaves (/a casa de esclavos benedictina fluminense). What is particular-
ly worth describing in this respect is a specific relationship between “a master”
and “a slave” (señor y siervo) and an opportunity for individual development
of some slaves in accordance with their interests, as was the case of a master of
painting, Antonio Teles, or organists, Matias (known only by his first name) and
José Campistas. Without emphasizing a relationship between human actions and
the area of a social group’s activity, it would be impossible to point at the con-
tribution of an institution to the heritage of the region to which it belonged. Dy-
namic presence of the order is illustrated with photos of Sao Bento church as
well as a Benedictine monastery in Rio de Janeiro, being one of the most distin-
guished monuments of the metropolis, which is not only the evidence of bygone
splendour, but also a centre of present Benedictine activity.