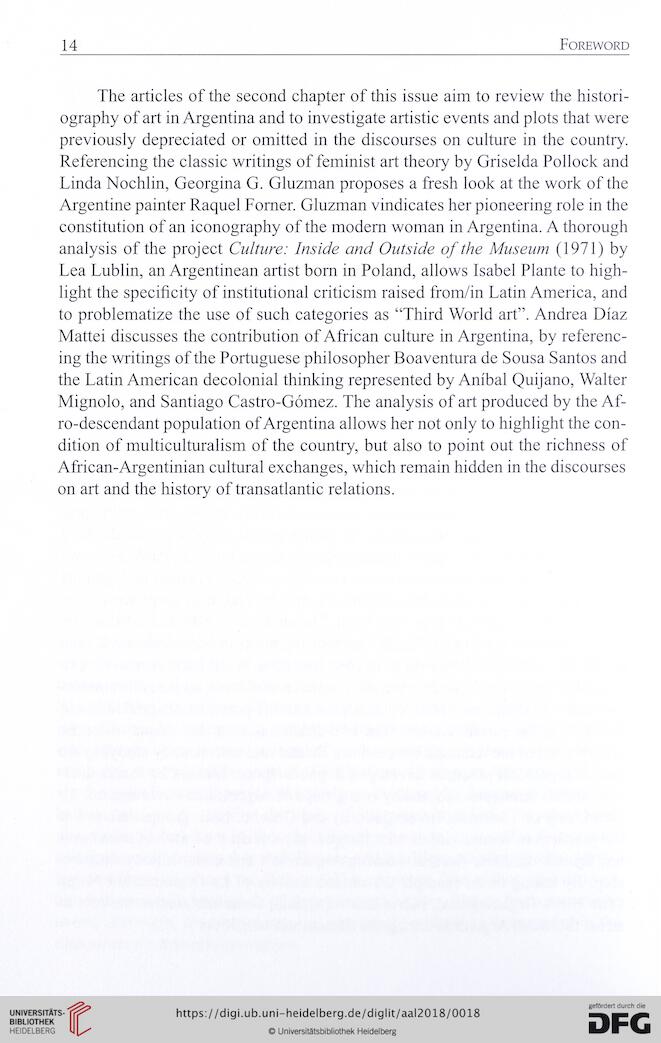 The articles of the second chapter of this issue aim to review the histori-
ography of art in Argentina and to investigate artistic events and plots that were
previously depreciated or omitted in the discourses on culture in the country.
Referencing the classic writings of feminist art theory by Griselda Pollock and
Linda Nochlin, Georgina G. Gluzman proposes a fresh look at the work of the
Argentine painter Raquel Fomer. Gluzman vindicates her pioneering role in the
constitution of an iconography of the modern woman in Argentina. A thorough
analysis of the project Culture: Inside and Outside of the Museum (1971) by
Lea Lublin, an Argentinean artist born in Poland, allows Isabel Plante to high-
light the specificity of institutional criticism raised from/in Latin America, and
to problematize the use of such categories as “Third World art”. Andrea Diaz
Mattei discusses the contribution of African culture in Argentina, by referenc-
ing the writings of the Portuguese philosopher Boaventura de Sousa Santos and
the Latin American decolonial thinking represented by Aníbal Quijano, Walter
Mignolo, and Santiago Castro-Gómez. The analysis of art produced by the Af-
ro-descendant population of Argentina allows her not only to highlight the con-
dition of multiculturalism of the country, but also to point out the richness of
African-Argentinian cultural exchanges, which remain hidden in the discourses
on art and the history of transatlantic relations.