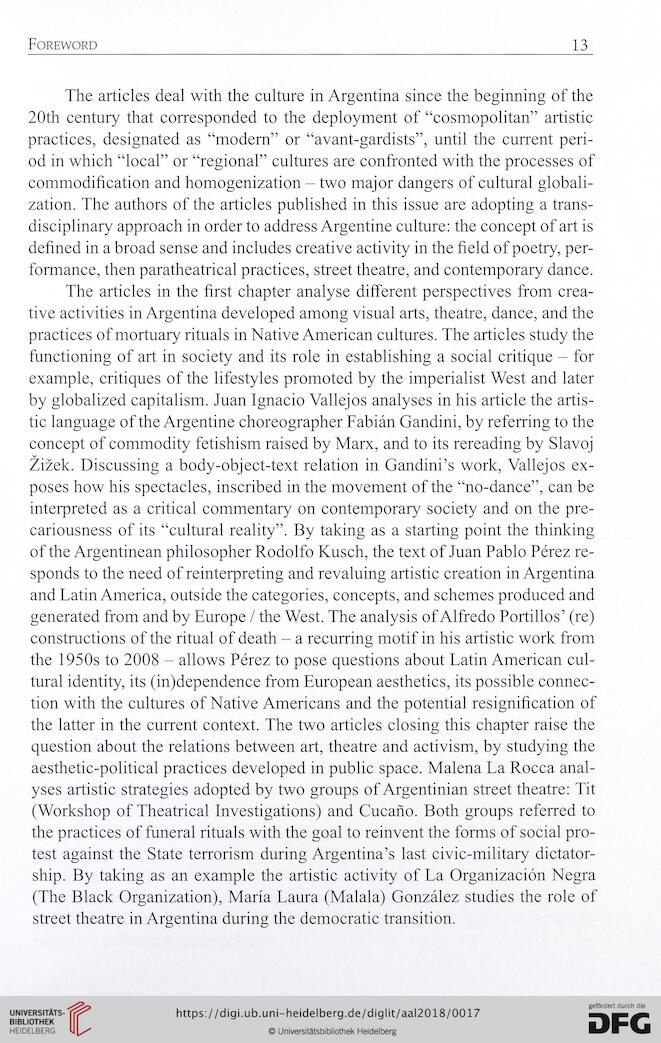 The articles deal with the culture in Argentina since the beginning of the
20th century that corresponded to the deployment of “cosmopolitan” artistic
practices, designated as “modem” or “avant-gardists”, until the current peri-
od in which “local” or “regional” cultures are confronted with the processes of
commodification and homogenization - two major dangers of cultural globali-
zation. The authors of the articles published in this issue are adopting a trans-
disciplinary approach in order to address Argentine culture: the concept of art is
defined in a broad sense and includes creative activity in the field of poetry, per-
formance, then paratheatrical practices, street theatre, and contemporary dance.
The articles in the first chapter analyse different perspectives from crea-
tive activities in Argentina developed among visual arts, theatre, dance, and the
practices of mortuary rituals in Native American cultures. The articles study the
functioning of art in society and its role in establishing a social critique - for
example, critiques of the lifestyles promoted by the imperialist West and later
by globalized capitalism. Juan Ignacio Vallejos analyses in his article the artis-
tic language of the Argentine choreographer Fabián Gandini, by referring to the
concept of commodity fetishism raised by Marx, and to its rereading by Slavoj
Zizek. Discussing a body-object-text relation in Gandini’s work, Vallejos ex-
poses how his spectacles, inscribed in the movement of the “no-dance”, can be
interpreted as a critical commentary on contemporary society and on the pre-
cariousness of its “cultural reality”. By taking as a starting point the thinking
of the Argentinean philosopher Rodolfo Kusch, the text of Juan Pablo Pérez re-
sponds to the need of reinterpreting and revaluing artistic creation in Argentina
and Latin America, outside the categories, concepts, and schemes produced and
generated from and by Europe / the West. The analysis of Alfredo Portillos’ (re)
constructions of the ritual of death - a recurring motif in his artistic work from
the 1950s to 2008 - allows Pérez to pose questions about Latin American cul-
tural identity, its (in)dependence from European aesthetics, its possible connec-
tion with the cultures of Native Americans and the potential resignification of
the latter in the current context. The two articles closing this chapter raise the
question about the relations between art, theatre and activism, by studying the
aesthetic-political practices developed in public space. Malena La Rocca anal-
yses artistic strategies adopted by two groups of Argentinian street theatre: Tit
(Workshop of Theatrical Investigations) and Cucaño. Both groups referred to
the practices of funeral rituals with the goal to reinvent the forms of social pro-
test against the State terrorism during Argentina’s last civic-military dictator-
ship. By taking as an example the artistic activity of La Organización Negra
(The Black Organization), Maria Laura (Malala) González studies the role of
street theatre in Argentina during the democratic transition.