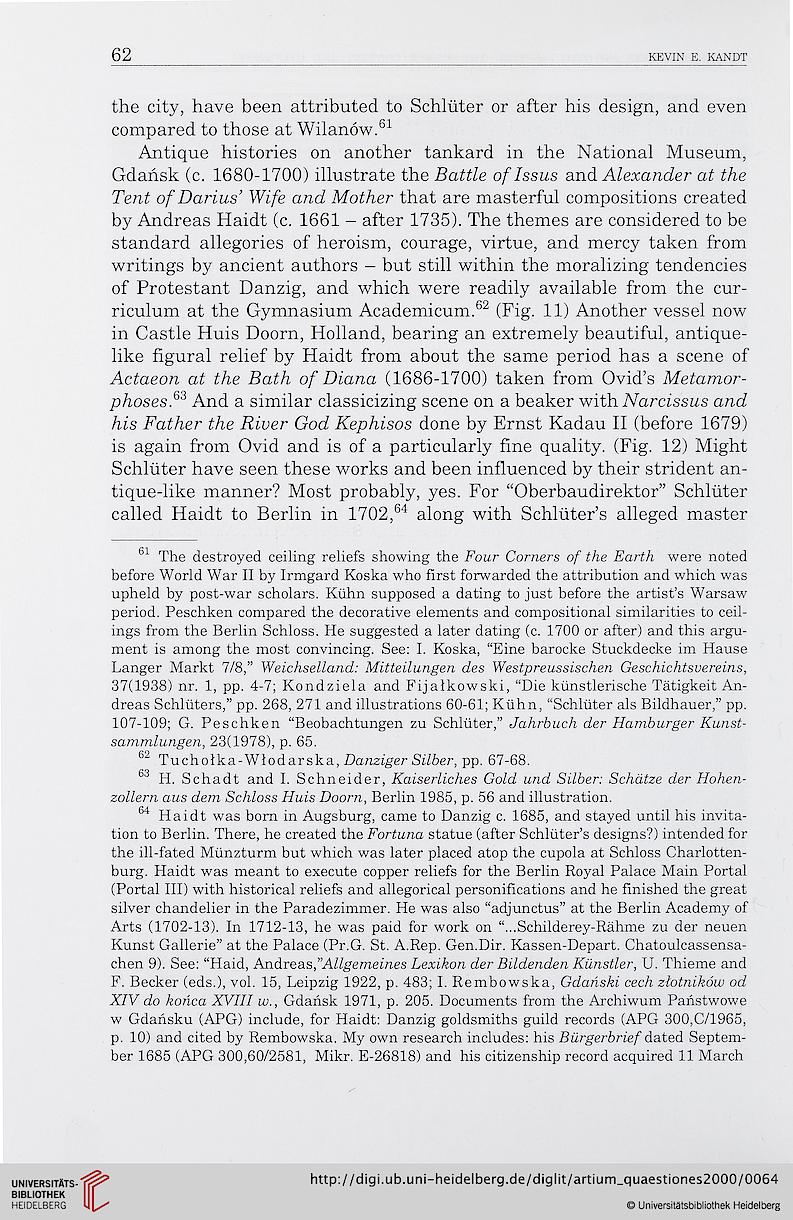 the city, hâve been attributed to Schlüter or after his design, and even
compared to those at Wilanôw.61

Antique historiés on another tankard in the National Muséum,
Gdansk (c. 1680-1700) illustrate the Battle of Issus and Alexander at the
Tent of Darius’ Wife and Mother that are masterful compositions created
by Andréas Haidt (c. 1661 - after 1735). The thèmes are considered to be
standard allégories of heroism, courage, virtue, and mercy taken from
writings by ancient authors - but still within the moralizing tendencies
of Protestant Danzig, and which were readily available from the cur-
riculum at the Gymnasium Academicum.62 (Fig. 11) Another vessel now
in Castle Huis Doorn, Holland, bearing an extremely beautiful, antique-
like figurai relief by Haidt from about the same period has a scene of
Actaeon at the Bath of Diana (1686-1700) taken from Ovid’s Métamor-
phosés. 63 And a similar classicizing scene on a beaker with Narcissus and
his Father the River God Kephisos done by Ernst Kadau II (before 1679)
is again from Ovid and is of a particularly fine quality. (Fig. 12) Might
Schlüter hâve seen these works and been influenced by their strident an-
tique-like manner? Most probably, yes. For “Oberbaudirektor” Schlüter
called Haidt to Berlin in 1702,64 along with Schlüter’s alleged master

61 The destroyed ceiling reliefs showing the Four Corners of the Earth were noted
before World War II by Irmgard Koska who first forwarded the attribution and which was
upheld by post-war scholars. Kühn supposed a dating to just before the artist’s Warsaw
period. Peschken compared the décorative éléments and compositional similarities to ceil-
ings from the Berlin Schloss. He suggested a later dating (c. 1700 or after) and this argu-
ment is among the most convincing. See: I. Koska, “Eine barocke Stuckdecke im Hause
Langer Markt 7/8,” Weichselland: Mitteilungen des Westpreussischen Geschichtsvereins,
37(1938) nr. 1, pp. 4-7; Kondziela and Fijalkowski, “Die künstlerische Tàtigkeit An-
dréas Schlüters,” pp. 268, 271 and illustrations 60-61; Kühn, “Schlüter als Bildhauer,” pp.
107-109; G. Peschken “Beobachtungen zu Schlüter,” Jahrbuch der Hamburger Kunst-
sammlungen, 23(1978), p. 65.

64 Haidt was bom in Augsburg, came to Danzig c. 1685, and stayed until his invita-
tion to Berlin. There, he created the Fortuna statue (after Schlüter’s designs?) intended for
the ill-fated Münzturm but which was later placed atop the cupola at Schloss Charlotten-
burg. Haidt was meant to execute copper reliefs for the Berlin Royal Palace Main Portai
(Portai III) with historical reliefs and allegorical personifïcations and he fïnished the great
silver chandelier in the Paradezimmer. He was also “adjunctus” at the Berlin Academy of
Arts (1702-13). In 1712-13, he was paid for work on “...Schilderey-Ràhme zu der neuen
Kunst Gallerie” at the Palace (Pr.G. St. A.Rep. Gen.Dir. Kassen-Depart. Chatoulcassensa-
chen 9). See: “Haid, Andréas,”Allgemeines Lexikon der Bildenden Künstler, U. Thieme and
F. Becker (eds.), vol. 15, Leipzig 1922, p. 483; I. Rembowska, Gdahski cech zlotnikôw od
XIV do kohca XVIII w., Gdansk 1971, p. 205. Documents from the Archiwum Panstwowe
w Gdansku (APG) include, for Haidt: Danzig goldsmiths guild records (APG 300,C/1965,
p. 10) and cited by Rembowska. My own research includes: his Bürgerbrief dated Septem-
ber 1685 (APG 300,60/2581, Mikr. E-26818) and his citizenship record acquired 11 March