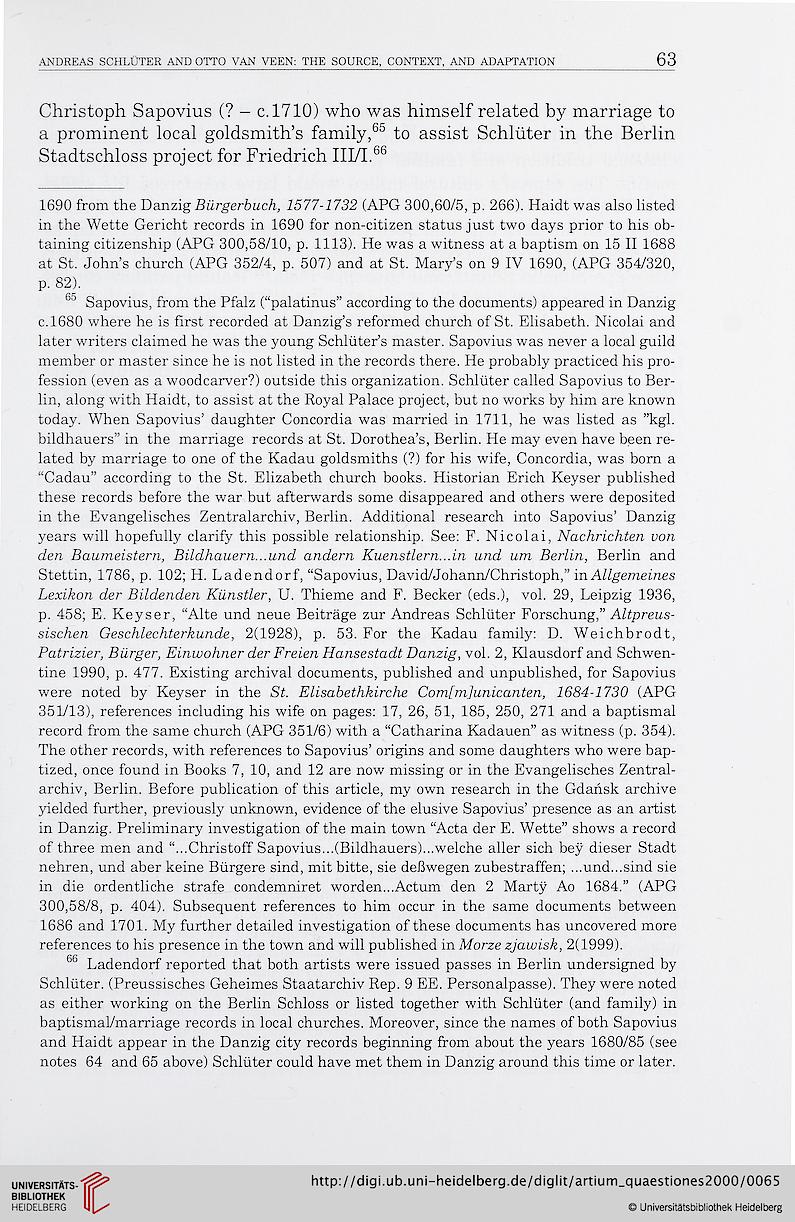 Christoph Sapovius (? - c.1710) who was himself related by marriage to
a prominent local goldsmith’s family,65 to assist Schlüter in the Berlin
Stadtschloss project for Friedrich III/I.66

60 Sapovius, from the Pfalz (“palatinus” according to the documents) appeared in Danzig

с. 1680 where he is fïrst recorded at Danzig’s reformed church of St. Elisabeth. Nicolai and
later writers claimed he was the young Schlüter’s master. Sapovius was never a local guild
member or master since he is not listed in the records there. He probably practiced his pro-
fession (even as a woodcarver?) outside this organization. Schlüter called Sapovius to Ber-
lin, along with Haidt, to assist at the Royal Palace project, but no works by him are known
today. When Sapovius’ daughter Concordia was married in 1711, he was listed as ”kgl.
bildhauers” in the marriage records at St. Dorothea’s, Berlin. He may even hâve been re-
lated by marriage to one of the Kadau goldsmiths (?) for his wife, Concordia, was bom a
“Cadau” according to the St. Elizabeth church books. Historian Erich Keyser published
these records before the war but afterwards some disappeared and others were deposited
in the Evangelisches Zentralarchiv, Berlin. Additional research into Sapovius’ Danzig
years will hopefully clarify this possible relationship. See: F. Nicolai, Nachrichten von
den Baumeistern, Bildhauern...und andern Kuenstlern...in und um Berlin, Berlin and
Stettin, 1786, p. 102; H. Ladendorf, “Sapovius, David/Johann/Christoph,” inAllgemeines
Lexikon der Bildenden Künstler, U. Thieme and F. Becker (eds.), vol. 29, Leipzig 1936,
p. 458; E. Keyser, “Alte und neue Beitrage zur Andréas Schlüter Forschung,” Altpreus-
sischen Geschlechterkunde, 2(1928), p. 53. For the Kadau family: D. Weichbrodt,
Patrizier, Bürger, Einwohner der Freien Hansestadt Danzig, vol. 2, Klausdorf and Schwen-
tine 1990, p. 477. Existing archivai documents, published and unpublished, for Sapovius
were noted by Keyser in the St. Elisabethkirche Com[m]unicanten, 1684-1730 (APG
351/13), references including his wife on pages: 17, 26, 51, 185, 250, 271 and a baptismal
record from the same church (APG 351/6) with a “Catharina Kadauen” as witness (p. 354).
The other records, with references to Sapovius’ origins and some daughters who were bap-
tized, once found in Books 7, 10, and 12 are now missing or in the Evangelisches Zentral-
archiv, Berlin. Before publication of this article, my own research in the Gdansk archive
yielded further, previously unknown, evidence of the elusive Sapovius’ presence as an artist
in Danzig. Preliminary investigation of the main town “Acta der E. Wette” shows a record
of three men and “...Christoff Sapovius...(Bildhauers)...welche aller sich beÿ dieser Stadt
nehren, und aber keine Bürgere sind, mit bitte, sie deBwegen zubestraffen; ...und...sind sie
in die ordentliche strafe condemniret worden...Actum den 2 Martÿ Ao 1684.” (APG
300,58/8, p. 404). Subséquent references to him occur in the same documents between
1686 and 1701. My further detailed investigation of these documents has uncovered more
references to his presence in the town and will published in Morze zjawisk, 2(1999).

66 Ladendorf reported that both artists were issued passes in Berlin undersigned by
Schlüter. (Preussisches Geheimes Staatarchiv Rep. 9 EE. Personalpasse). They were noted
as either working on the Berlin Schloss or listed together with Schlüter (and family) in
baptismal/marriage records in local churches. Moreover, since the names of both Sapovius
and Haidt appear in the Danzig city records beginning from about the years 1680/85 (see
notes 64 and 65 above) Schlüter could hâve met them in Danzig around this time or later.