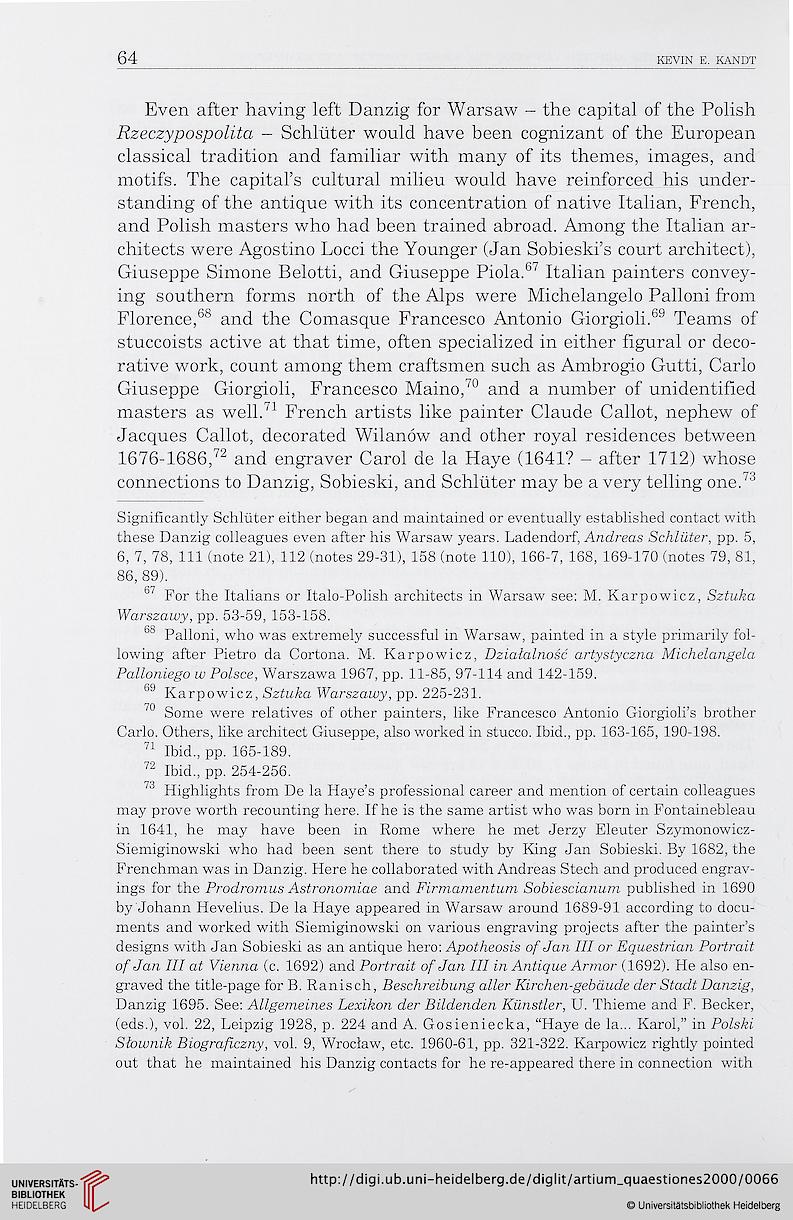 Even after having left Danzig for Warsaw - the capital of the Polish
Rzeczypospolita - Schlüter would hâve been cognizant of the European
classical tradition and familiar with many of its thèmes, images, and
motifs. The capital’s cultural milieu would hâve reinforced his under-
standing of the antique with its concentration of native Italian, French,
and Polish masters who had been trained abroad. Among the Italian ar-
chitects were Agostino Locci the Younger (Jan Sobieski’s court architect),
Giuseppe Simone Belotti, and Giuseppe Piola.* 67 Italian painters convey-
ing Southern forms north of the Alps were Michelangelo Palloni from
Florence,68 and the Comasque Francesco Antonio Giorgioli.69 Teams of
stuccoists active at that time, often specialized in either figurai or déco-
rative work, count among them craftsmen such as Ambrogio Gutti, Carlo
Giuseppe Giorgioli, Francesco Maino,70 and a number of unidentified
masters as well.71 72 French artists like painter Claude Callot, nephew of
Jacques Callot, decorated Wilanôw and other royal résidences between
1676-1686,72 and engraver Carol de la Haye (1641? - after 1712) whose
connections to Danzig, Sobieski, and Schlüter may be a very telling one.73

70 Some were relatives of other painters, like Francesco Antonio Giorgioli’s brother
Carlo. Others, like architect Giuseppe, also worked in stucco. Ibid., pp. 163-165, 190-198.

73 Highlights from De la Haye’s professional career and mention of certain colleagues
may prove worth recounting here. If he is the same artist who was born in Fontainebleau
in 1641, he may hâve been in Rome where he met Jerzy Eleuter Szymonowicz-
Siemiginowski who had been sent there to study by King Jan Sobieski. By 1682, the
Frenchman was in Danzig. Here he collaborated with Andréas Stech and produced engrav-
ings for the Prodromus Astronomiae and Firmamentum Sobiescianum published in 1690
by Johann Hevelius. De la Haye appeared in Warsaw around 1689-91 according to docu-
ments and worked with Siemiginowski on various engraving projects after the painter’s
designs with Jan Sobieski as an antique hero: Apotheosis of Jan III or Equestrian Portrait
of Jan III at Vienna (c. 1692) and PoHrait of Jan III in Antique Armor (1692). He also en-
graved the title-page for B. Ranisch, Beschreibung aller Kirchen-gebàude der Stadt Danzig,
Danzig 1695. See: Allgemeines Lexikon der Bildenden Künstler, U. Thieme and F. Becker,
(eds.), vol. 22, Leipzig 1928, p. 224 and A. Gosieniecka, “Haye de la... Karol,” in Polski
Stownik Biograficzny, vol. 9, Wrocîaw, etc. 1960-61, pp. 321-322. Karpowicz rightly pointed
out that he maintained his Danzig contacts for he re-appeared there in connection with