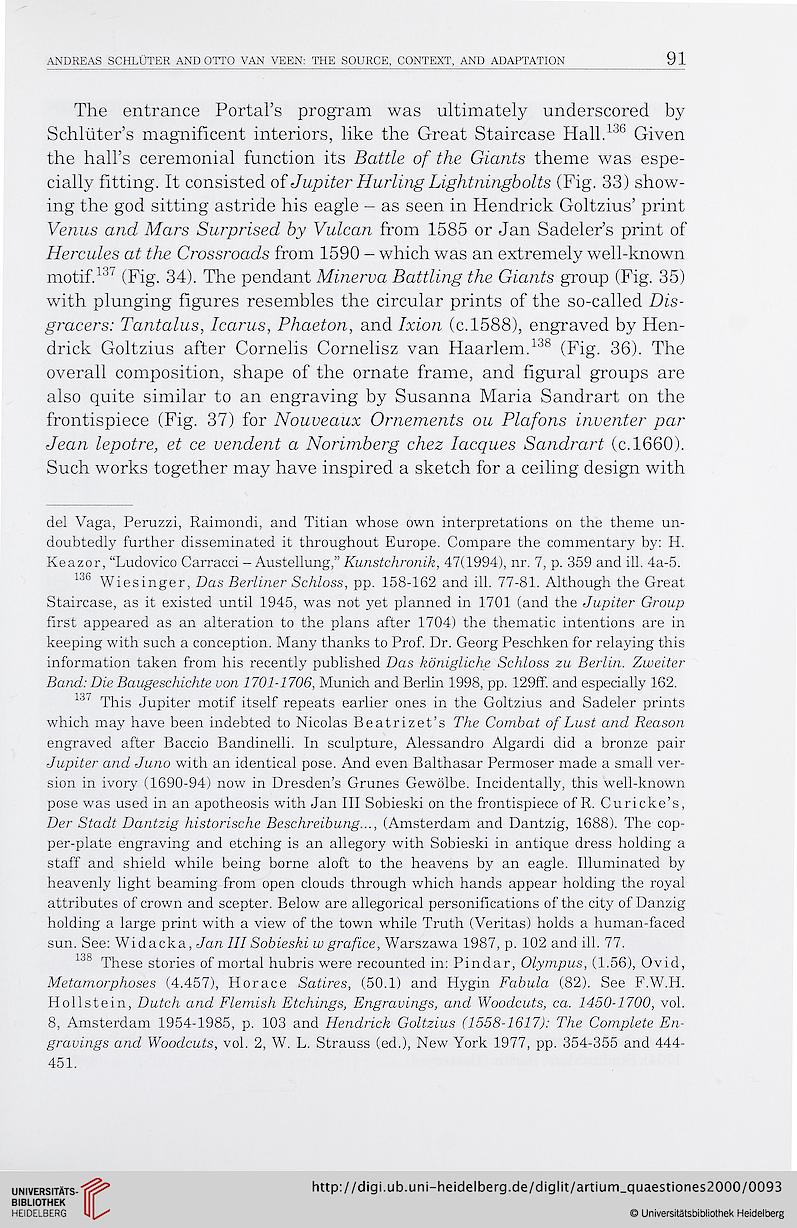 The entrance Portal’s program was ultimately underscored by
Schlüter’s magniflcent interiors, like the Great Staircase Hall.* 136 Given
the hall’s cérémonial function its Battle of the Giants theme was espe-
cially fitting. It consisted of Jupiter Hurling Lightningholts (Fig. 33) show-
ing the god sitting astride his eagle - as seen in Hendrick Goltzius’ print
Venus and Mars Surprised by Vulcan from 1585 or Jan Sadeler’s print of
Hercules at the Crossroads from 1590 - which was an extremely well-known
motif.137 (Fig. 34). The pendant Minerva Battling the Giants group (Fig. 35)
with plunging figures resembles the circular prints of the so-called Dis-
gracers: Tantalus, Icarus, Phaeton, and Ixion (c.1588), engraved by Hen-
drick Goltzius after Cornelis Cornelisz van Haarlem.138 (Fig. 36). The
overall composition, shape of the ornate frame, and figurai groups are
also quite similar to an engraving by Susanna Maria Sandrart on the
frontispiece (Fig. 37) for Nouveaux Ornements ou Plafons inventer par
Jean lepotre, et ce vendent a Norimberg chez lacques Sandrart (c.1660).
Such works together may hâve inspired a sketch for a ceiling design with

del Vaga, Peruzzi, Raimondi, and Titian whose own interprétations on the theme un-
doubtedly further disseminated it throughout Europe. Compare the commentary by: H.
Keazor, “Ludovico Carracci - Austellung,” Kunstchronïk, 47(1994), nr. 7, p. 359 and ill. 4a-5.

136 Wiesinger, Das Berliner Schloss, pp. 158-162 and ill. 77-81. Although the Great
Staircase, as it existed until 1945, was not yet planned in 1701 (and the Jupiter Group
first appeared as an alteration to the plans after 1704) the thematic intentions are in
keeping with such a conception. Many thanks to Prof. Dr. Georg Peschken for relaying this
information taken from his recently published Das kônigliche Schloss zu Berlin. Zweiter
Band: Die Baugeschichte von 1701-1706, Munich and Berlin 1998, pp. 129ff. and especially 162.

137 This Jupiter motif itself repeats earlier ones in the Goltzius and Sadeler prints
which may hâve been indebted to Nicolas Beatrizet’s The Combat of Lust and Reason
engraved after Baccio Bandinelli. In sculpture, Alessandro Algardi did a bronze pair
Jupiter and Juno with an identical pose. And even Balthasar Permoser made a small ver-
sion in ivory (1690-94) now in Dresden’s Grunes Gewôlbe. Incidentally, this well-known
pose was used in an apotheosis with Jan III Sobieski on the frontispiece of R. Curicke’s,
Der Stadt Dantzig historische Beschreibung..., (Amsterdam and Dantzig, 1688). The cop-
per-plate engraving and etching is an allegory with Sobieski in antique dress holding a
staff and shield while being borne aloft to the heavens by an eagle. Illuminated by
heavenly light beaming from open clouds through which hands appear holding the royal
attributes of crown and scepter. Below are allegorical personifications of the city of Danzig
holding a large print with a view of the town while Truth (Veritas) holds a human-faced
sun. See: Widacka, Jan IIISobieski w grafice, Warszawa 1987, p. 102 and ill. 77.