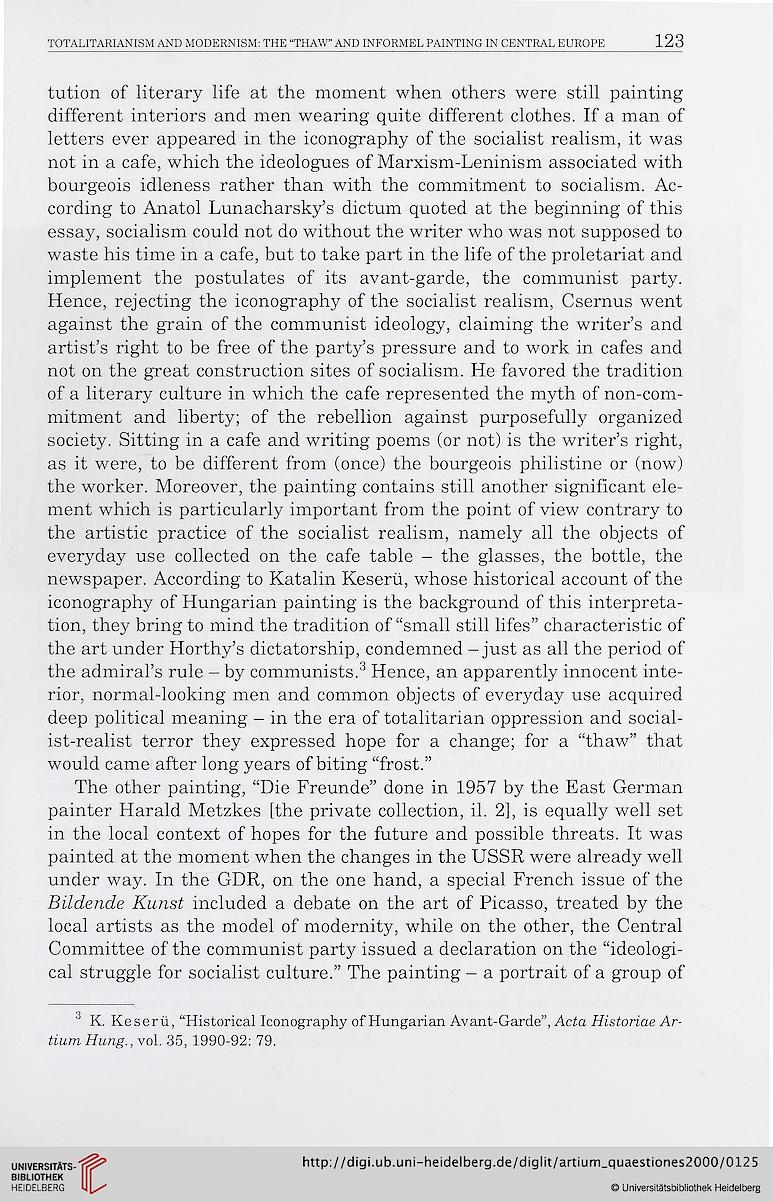 Information about OCR text
TOTALITARLANISM AND MODERNISM: THE “THAW” AND INFORMEL PAINTING IN CENTRAL EUROPE

tution of literary life at the moment when others were still painting
different interiors and men wearing quite different clothes. If a man of
letters ever appeared in the iconography of the socialist realism, it was
not in a café, which the idéologues of Marxism-Leninism associated with
bourgeois idleness rather than with the commitment to socialism. Ac-
cording to Anatol Lunacharsky’s dictum quoted at the beginning of this
essay, socialism could not do without the writer who was not supposed to
waste his time in a café, but to take part in the life of the prolétariat and
implement the postulâtes of its avant-garde, the communist party.
Hence, rejecting the iconography of the socialist realism, Csernus went
against the grain of the communist ideology, claiming the writer’s and
artist’s right to be free of the party’s pressure and to work in cafés and
not on the great construction sites of socialism. He favored the tradition
of a literary culture in which the café represented the myth of non-com-
mitment and liberty; of the rébellion against purposefully organized
society. Sitting in a café and writing poems (or not) is the writer’s right,
as it were, to be different from (once) the bourgeois philistine or (now)
the worker. Moreover, the painting contains still another significant élé-
ment which is particularly important from the point of view contrary to
the artistic practice of the socialist realism, namely ail the objects of
everyday use collected on the café table - the glasses, the bottle, the
newspaper. According to Katalin Keserü, whose historical account of the
iconography of Hungarian painting is the background of this interpréta-
tion, they bring to mind the tradition of “small still lifes” characteristic of
the art under Horthy’s dictatorship, condemned - just as ail the period of
the admiral’s rule - by communists.3 Hence, an apparently innocent inte-
rior, normal-looking men and common objects of everyday use acquired
deep political meaning - in the era of totalitarian oppression and social-
ist-realist terror they expressed hope for a change; for a “thaw” that
would came after long years of biting “frost.”

The other painting, “Die Freunde” done in 1957 by the East German
painter Harald Metzkes [the private collection, il. 2], is equally well set
in the local context of hopes for the future and possible threats. It was
painted at the moment when the changes in the USSR were already well
under way. In the GDR, on the one hand, a spécial French issue of the
Bildende Kunst included a debate on the art of Picasso, treated by the
local artists as the model of modernity, while on the other, the Central
Committee of the communist party issued a déclaration on the “ideologi-
cal struggle for socialist culture.” The painting - a portrait of a group of