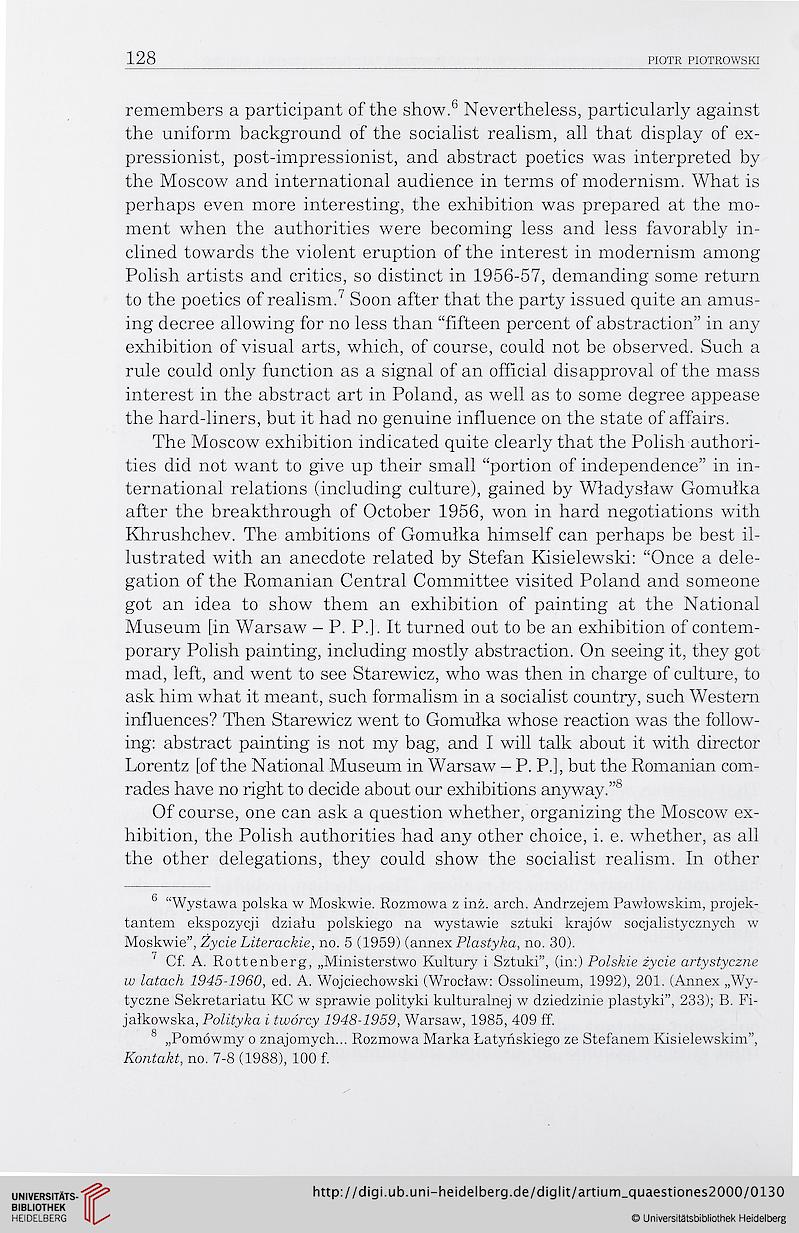 remembers a participant of the show.6 Nevertheless, particularly against
the uniform background of the socialist realism, ail that display of ex-
pressionist, post-impressionist, and abstract poetics was interpreted by
the Moscow and international audience in terms of modernism. What is
perhaps even more interesting, the exhibition was prepared at the mo-
ment when the authorities were becoming less and less favorably in-
clined towards the violent éruption of the interest in modernism among
Polish artists and critics, so distinct in 1956-57, demanding some return
to the poetics of realism.7 Soon after that the party issued quite an amus-
ing decree allowing for no less than “fîfteen percent of abstraction” in any
exhibition of visual arts, which, of course, could not be observed. Such a
rule could only fonction as a signal of an official disapproval of the mass
interest in the abstract art in Poland, as well as to some degree appease
the hard-liners, but it had no genuine influence on the state of affairs.

The Moscow exhibition indicated quite clearly that the Polish authori-
ties did not want to give up their small “portion of independence” in in-
ternational relations (including culture), gained by Wladyslaw Gomulka
after the breakthrough of October 1956, won in hard negotiations with
Khrushchev. The ambitions of Gomulka himself can perhaps be best il-
lustrated with an anecdote related by Stefan Kisielewski: “Once a délé-
gation of the Romanian Central Committee visited Poland and someone
got an idea to show them an exhibition of painting at the National
Muséum [in Warsaw - P. P.]. It turned out to be an exhibition of contem-
porary Polish painting, including mostly abstraction. On seeing it, they got
mad, left, and went to see Starewicz, who was then in charge of culture, to
ask him what it meant, such formalism in a socialist country, such Western
influences? Then Starewicz went to Gomulka whose reaction was the follow-
ing: abstract painting is not my bag, and I will talk about it with director
Lorentz [of the National Musemn in Warsaw - P. P.], but the Romanian com-
rades hâve no right to décidé about our exhibitions anyway.”8

Of course, one can ask a question whether, organizing the Moscow ex-
hibition, the Polish authorities had any other choice, i. e. whether, as ail
the other délégations, they could show the socialist realism. In other