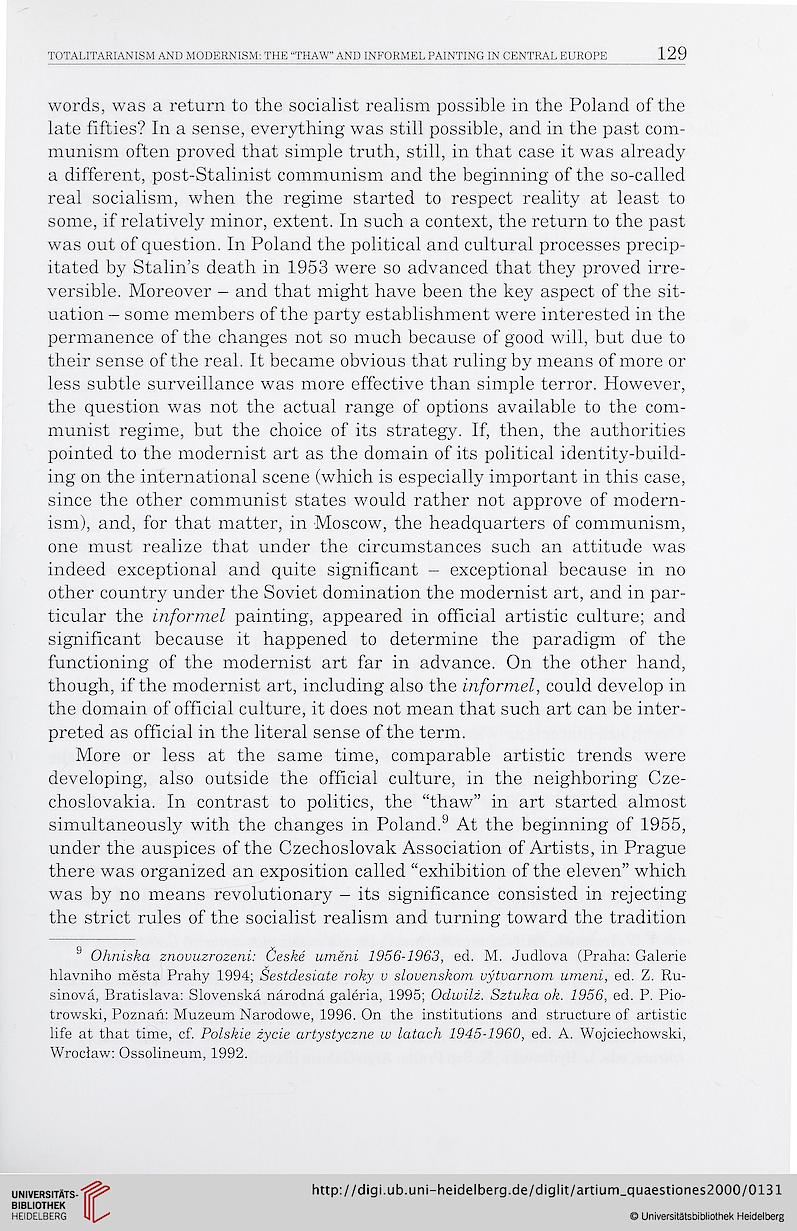 words, was a return to the socialist realism possible in the Poland of the
late fifties? In a sense, everything was still possible, and in the past com-
munism often proved that simple truth, still, in that case it was already
a different, post-Stalinist communism and the beginning of the so-called
real socialism, when the régime started to respect reality at least to
some, if relatively minor, extent. In such a context, the return to the past
was out of question. In Poland the political and cultural processes precip-
itated by Stalin’s death in 1953 were so advanced that they proved irré-
versible. Moreover - and that might hâve been the key aspect of the sit-
uation - some members of the party establishment were interested in the
permanence of the changes not so much because of good will, but due to
their sense of the real. It became obvious that ruling by means of more or
less subtle surveillance was more effective than simple terror. However,
the question was not the actual range of options available to the com-
munist régime, but the choice of its strategy. If, then, the authorities
pointed to the modernist art as the domain of its political identity-build-
ing on the international scene (which is especially important in this case,
since the other communist States would rather not approve of modern-
isai), and, for that matter, in Moscow, the headquarters of communism,
one must realize that under the circumstances such an attitude was
indeed exceptional and quite significant - exceptional because in no
other country under the Soviet domination the modernist art, and in par-
ticular the informel painting, appeared in official artistic culture; and
signifïcant because it happened to détermine the paradigm of the
functioning of the modernist art far in advance. On the other hand,
though, if the modernist art, including also the informel, could develop in
the domain of official culture, it does not mean that such art can be inter-
preted as official in the literal sense of the terni.

More or less at the same time, comparable artistic trends were
developing, also outside the official culture, in the neighboring Cze-
choslovakia. In contrast to politics, the “thaw” in art started almost
simultaneously with the changes in Poland.9 At the beginning of 1955,
under the auspices of the Czechoslovak Association of Artists, in Prague
there was organized an exposition called “exhibition of the eleven” which
was by no means revolutionary - its significance consisted in rejecting
the strict rules of the socialist realism and turning toward the tradition