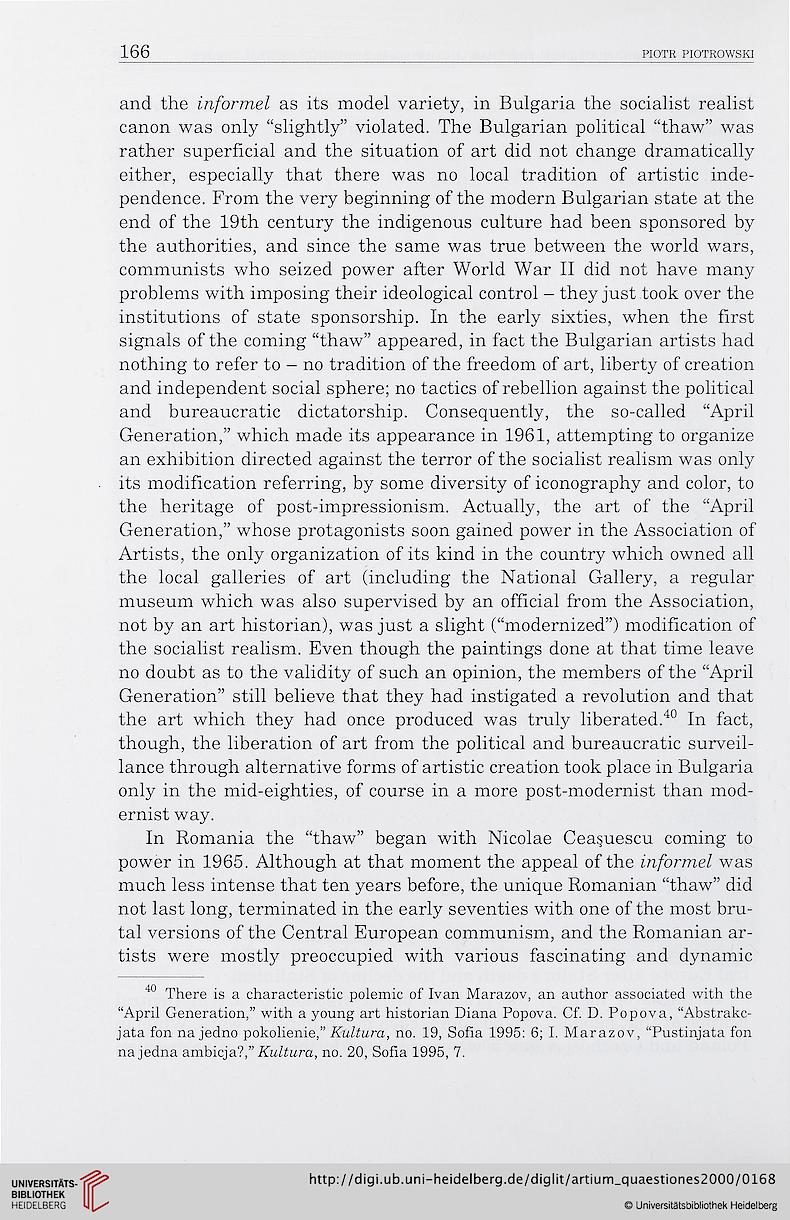 and the informel as its model variety, in Bulgaria the socialist realist
canon was only “slightly” violated. The Bulgarian political “thaw” was
rather superficial and the situation of art did not change dramatically
either, especially that there was no local tradition of artistic inde-
pendence. From the very beginning of the modem Bulgarian state at the
end of the 19th century the indigenous culture had been sponsored by
the authorities, and since the same was true between the world wars,
communists who seized power after World War II did not hâve many
problems with imposing their ideological control - they just took over the
institutions of state sponsorship. In the early sixties, when the fïrst
signais of the coming “thaw” appeared, in fact the Bulgarian artists had
nothing to refer to - no tradition of the freedom of art, liberty of création
and independent social sphere; no tactics of rébellion against the political
and bureaucratie dictatorship. Consequently, the so-called “April
Génération,” which made its appearance in 1961, attempting to organize
an exhibition directed against the terror of the socialist realism was only
its modification referring, by some diversity of iconography and color, to
the héritage of post-impressionism. Actually, the art of the “April
Génération,” whose protagonists soon gained power in the Association of
Artists, the only organization of its kind in the country which owned ail
the local galleries of art (including the National Gallery, a regular
muséum which was also supervised by an official from the Association,
not by an art historian), was just a slight (“modernized”) modification of
the socialist realism. Even though the paintings done at that time leave
no doubt as to the validity of such an opinion, the members of the “April
Génération” still believe that they had instigated a révolution and that
the art which they had once produced was truly liberated.40 In fact,
though, the libération of art from the political and bureaucratie surveil-
lance through alternative forms of artistic création took place in Bulgaria
only in the mid-eighties, of course in a more post-modernist than mod-
ernist way.

In Romania the “thaw” began with Nicolae Ceaçuescu coming to
power in 1965. Although at that moment the appeal of the informel was
much less intense that ten years before, the unique Romanian “thaw” did
not last long, terminated in the early seventies with one of the rnost bru-
tal versions of the Central European communism, and the Romanian ar-
tists were mostly preoccupied with various fascinating and dynamic