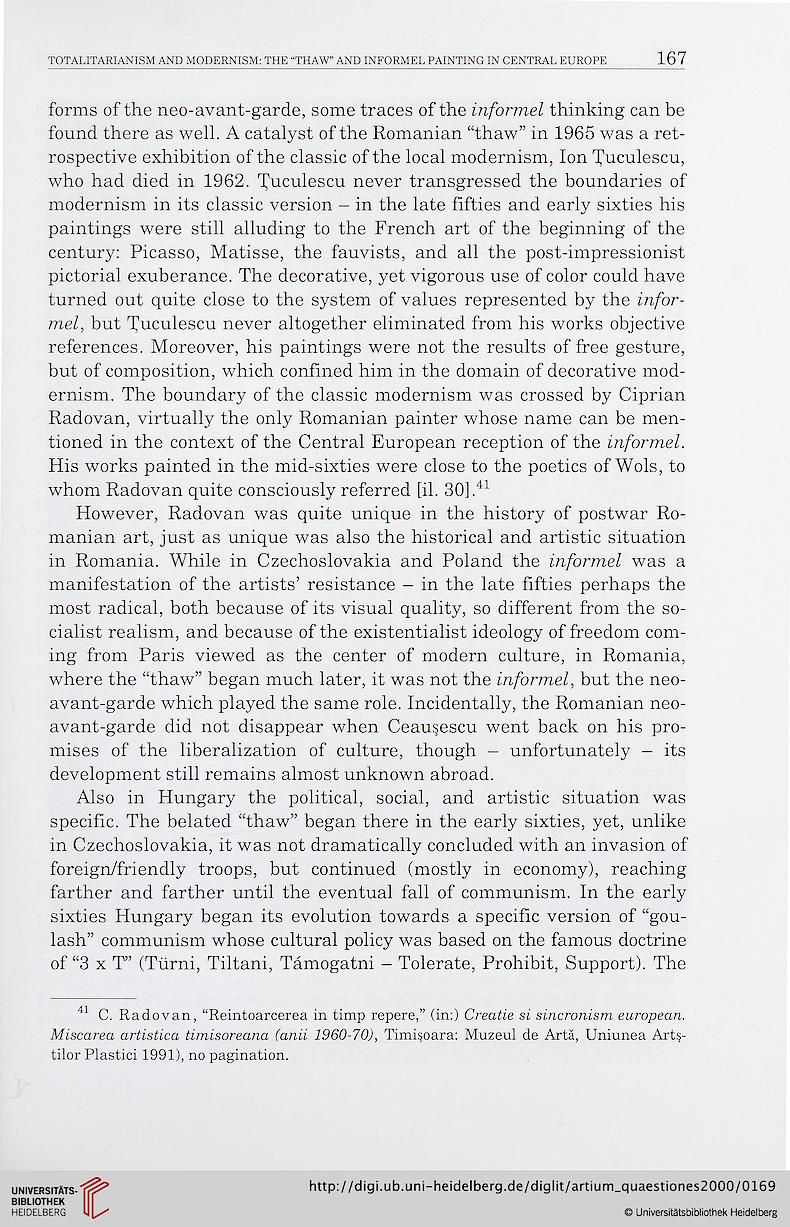 forms of the neo-avant-garde, some traces of the informel thinking can be
found there as well. A catalyst of the Romanian “thaw” in 1965 was a rét-
rospective exhibition of the classic of the local modernism, Ion T^uculescu,
who had died in 1962. Xuculescu never transgressed the boundaries of
modernism in its classic version - in the late fïfties and early sixties his
paintings were still alluding to the French art of the beginning of the
century: Picasso, Matisse, the fauvists, and ail the post-impressionist
pictorial exubérance. The décorative, yet vigorous use of color could hâve
turned out quite close to the System of values represented by the infor-
mel, but Xiiculescu never altogether eliminated from his works objective
references. Moreover, his paintings were not the results of free gesture,
but of composition, which confîned him in the domain of décorative mod-
ernism. The boundary of the classic modernism was crossed by Ciprian
Radovan, virtually the only Romanian painter whose name can be men-
tioned in the context of the Central European réception of the informel.
His works painted in the mid-sixties were close to the poetics of Wols, to
whom Radovan quite consciously referred [il. 30] .41

However, Radovan was quite unique in the history of postwar Ro-
manian art, just as unique was also the historical and artistic situation
in Romania. While in Czechoslovakia and Poland the informel was a
manifestation of the artists’ résistance - in the late fïfties perhaps the
most radical, both because of its visual quality, so different from the so-
cialist realism, and because of the existentialist ideology of freedom Corn-
ing from Paris viewed as the center of modem culture, in Romania,
where the “thaw” began much later, it was not the informel, but the neo-
avant-garde which played the same rôle. Incidentally, the Romanian neo-
avant-garde did not disappear when Ceaucescu went back on his pro-
mises of the liberalization of culture, though - unfortunately - its
development still remains almost unknown abroad.

Also in Hungary the political, social, and artistic situation was
spécifie. The belated “thaw” began there in the early sixties, yet, unlike
in Czechoslovakia, it was not dramatically concluded with an invasion of
foreign/friendly troops, but continued (mostly in economy), reaching
farther and farther until the eventual fall of communism. In the early
sixties Hungary began its évolution towards a spécifie version of “gou-
lash” communism whose cultural policy was based on the famous doctrine
of “3 x T” (Türni, Tiltani, Tâmogatni - Tolerate, Prohibit, Support). The