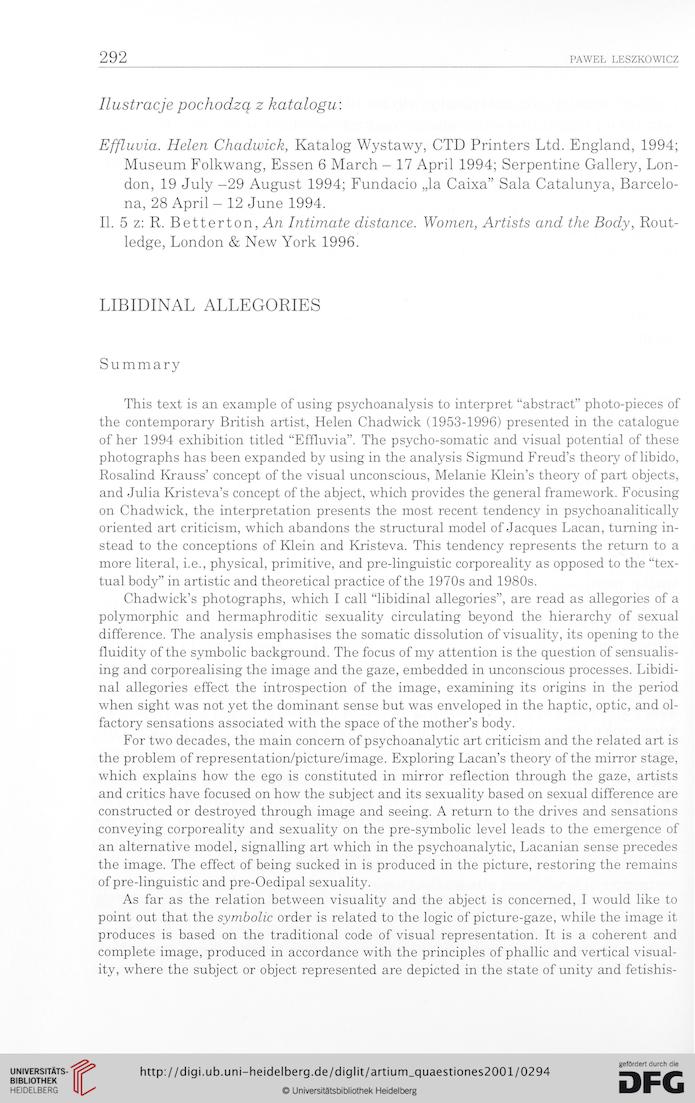 Summary
This text is an example of using psychoanalysis to interpret “abstract” photo-pieces of
the contemporary British artist, Helen Chadwick (1953-1996) presented in the catalogue
of her 1994 exhibition titled “Effluvia”. The psycho-somatic and visual potential of these
photographs has been expanded by using in the analysis Sigmund Freud’s theory of libido,
Rosalind Krauss’ concept of the visual unconscious, Melanie Klein’s theory of part objects,
and Julia Kristeva’s concept of the abject, which provides the generał framework. Focusing
on Chadwick, the interpretation presents the most recent tendency in psychoanalitically
oriented art criticism, which abandons the structural model of Jacąues Lacan, tuming in-
stead to the conceptions of Klein and Kristeva. This tendency represents the return to a
morę literał, i.e., physical, primitive, and pre-linguistic corporeality as opposed to the “tex-
tual body” in artistic and theoretical practice of the 1970s and 1980s.
Chadwick’s photographs, which I cali “libidinal allegories”, are read as allegories of a
polymorphic and hermaphroditic sexuality circulating beyond the hierarchy of sexual
difference. The analysis emphasises the somatic dissolution of visuality, its opening to the
fluidity of the symbolic background. The focus of my attention is the ąuestion of sensualis-
ing and corporealising the image and the gazę, embedded in unconscious processes. Libidi-
nal allegories effect the introspection of the image, examining its origins in the period
when sight was not yet the dominant sense but was enveloped in the haptic, optic, and ol-
factory sensations associated with the space of the motheFs body.
For two decades, the main concem of psychoanalytic art criticism and the related art is
the problem of representation/picture/image. Exploring Lacan’s theory of the mirror stage,
which explains how the ego is constituted in mirror reflection through the gazę, artists
and critics have focused on how the subject and its sexuality based on sexual difference are
constructed or destroyed through image and seeing. A return to the drives and sensations
conveying corporeality and sexuality on the pre-symbolic level leads to the emergence of
an alternative model, signalling art which in the psychoanalytic, Lacanian sense precedes
the image. The effect of being sucked in is produced in the picture, restoring the remains
of pre-linguistic and pre-Oedipal sexuality.
As far as the relation between visuality and the abject is concemed, I would like to
point out that the symbolic order is related to the logie of picture-gaze, while the image it
produces is based on the traditional codę of visual representation. It is a coherent and
complete image, produced in accordance with the principles of phallic and vertical visual-
ity, where the subject or object represented are depicted in the state of unity and fetishis-