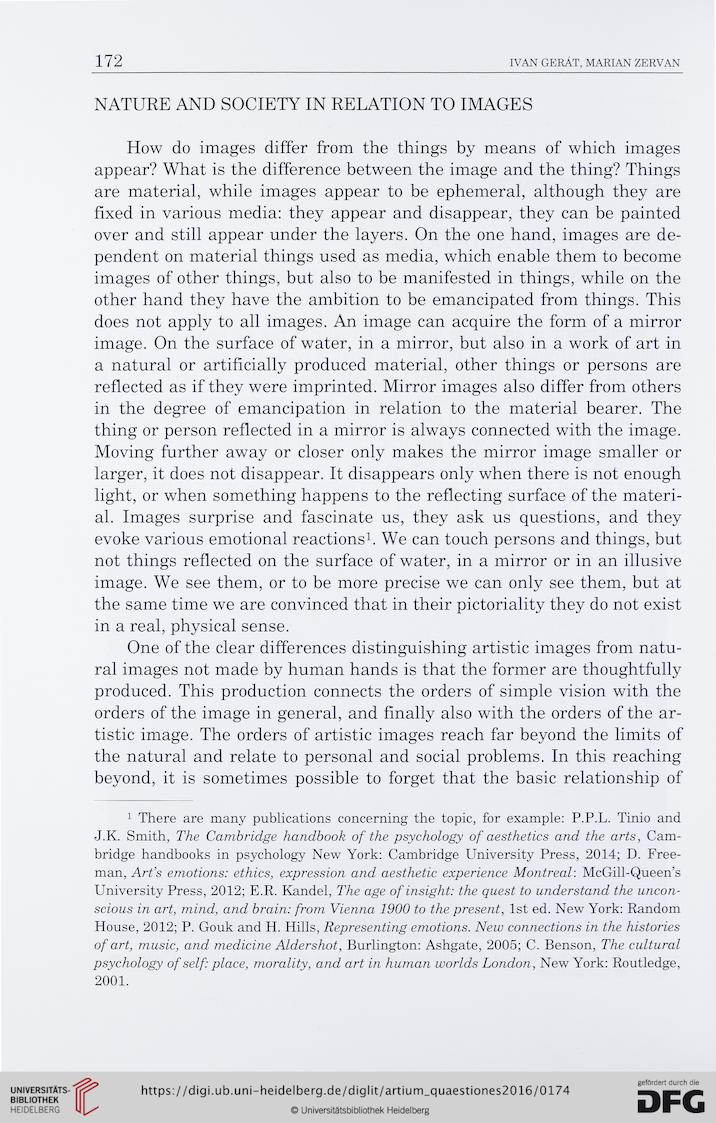 NATURE AND SOCIETY IN RELATION TO IMAGES
How do images differ from the things by means of which images
appear? What is the difference between the image and the thing? Things
are material, while images appear to be ephemeral, although they are
fixed in various media: they appear and disappear, they can be painted
over and still appear under the layers. On the one hand, images are de-
pendent on material things used as media, which enable them to become
images of other things, but also to be manifested in things, while on the
other hand they have the ambition to be emancipated from things. This
does not apply to all images. An image can acquire the form of a mirror
image. On the surface of water, in a mirror, but also in a work of art in
a natural or artificially produced material, other things or persons are
reflected as if they were imprinted. Mirror images also differ from others
in the degree of emancipation in relation to the material bearer. The
thing or person reflected in a mirror is always connected with the image.
Moving further away or closer only makes the mirror image smaller or
larger, it does not disappear. It disappears only when there is not enough
light, or when something happens to the reflecting surface of the materi-
al. Images surprise and fascinate us, they ask us questions, and they
evoke various emotional reactions1. We can touch persons and things, but
not things reflected on the surface of water, in a mirror or in an illusive
image. We see them, or to be more precise we can only see them, but at
the same time we are convinced that in their pictoriality they do not exist
in a real, physical sense.
One of the clear differences distinguishing artistic images from natu-
ral images not made by human hands is that the former are thoughtfully
produced. This production connects the orders of simple vision with the
orders of the image in general, and finally also with the orders of the ar-
tistic image. The orders of artistic images reach far beyond the limits of
the natural and relate to personal and social problems. In this reaching
beyond, it is sometimes possible to forget that the basic relationship of
1 There are many publications concerning the topic, for example: P.P.L. Tinio and
J.K. Smith, The Cambridge handbook of the psychology of aesthetics and the arts, Cam-
bridge handbooks in psychology New York: Cambridge University Press, 2014; D. Free-
man, Art’s emotions: ethics, expression and aesthetic experience Montreal'. McGill-Queen’s
University Press, 2012; E.R. Kandel, The age of insight: the quest to understand the uncon-
scious in art, mind, and brain: from Vienna 1900 to the present, 1st ed. New York: Random
House, 2012; P. Gouk and H. Hills, Representing emotions. New connections in the histories
of art, music, and medicine Aldershot, Burlington: Ashgate, 2005; C. Benson, The cultural
psychology of self: place, morality, and art in human worlds London, New York: Routledge,
2001.