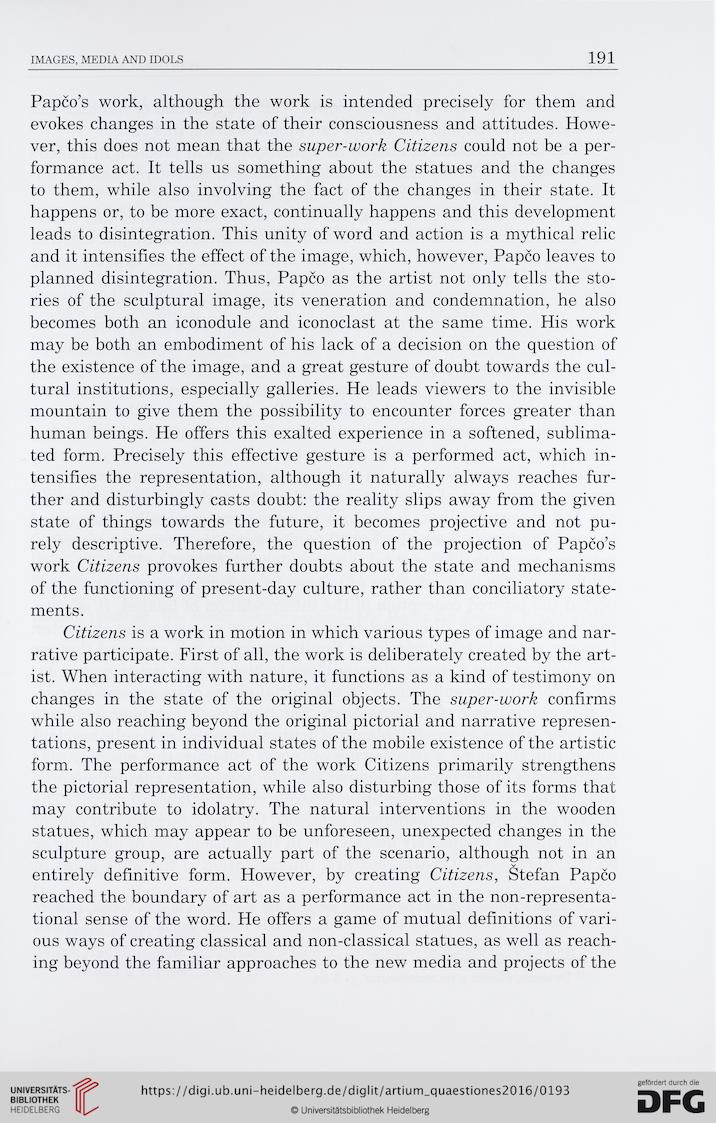 Papco’s work, although the work is intended precisely for them and
evokes changes in the state of their consciousness and attitudes. Howe-
ver, this does not mean that the super-work Citizens could not be a per-
formance act. It tells us something about the statues and the changes
to them, while also involving the fact of the changes in their state. It
happens or, to be more exact, continually happens and this development
leads to disintegration. This unity of word and action is a mythical relic
and it intensifies the effect of the image, which, however, Papco leaves to
planned disintegration. Thus, Papco as the artist not only tells the sto-
ries of the sculptural image, its veneration and condemnation, he also
becomes both an iconodule and iconoclast at the same time. His work
may be both an embodiment of his lack of a decision on the question of
the existence of the image, and a great gesture of doubt towards the cul-
tural institutions, especially galleries. He leads viewers to the invisible
mountain to give them the possibility to encounter forces greater than
human beings. He offers this exalted experience in a softened, sublima-
ted form. Precisely this effective gesture is a performed act, which in-
tensifies the representation, although it naturally always reaches fur-
ther and disturbingly casts doubt: the reality slips away from the given
state of things towards the future, it becomes projective and not pu-
rely descriptive. Therefore, the question of the projection of Papco’s
work Citizens provokes further doubts about the state and mechanisms
of the functioning of present-day culture, rather than conciliatory state-
ments.
Citizens is a work in motion in which various types of image and nar-
rative participate. First of all, the work is deliberately created by the art-
ist. When interacting with nature, it functions as a kind of testimony on
changes in the state of the original objects. The super-work confirms
while also reaching beyond the original pictorial and narrative represen-
tations, present in individual states of the mobile existence of the artistic
form. The performance act of the work Citizens primarily strengthens
the pictorial representation, while also disturbing those of its forms that
may contribute to idolatry. The natural interventions in the wooden
statues, which may appear to be unforeseen, unexpected changes in the
sculpture group, are actually part of the scenario, although not in an
entirely definitive form. However, by creating Citizens, Stefan Papco
reached the boundary of art as a performance act in the non-representa-
tional sense of the word. He offers a game of mutual definitions of vari-
ous ways of creating classical and non-classical statues, as well as reach-
ing beyond the familiar approaches to the new media and projects of the