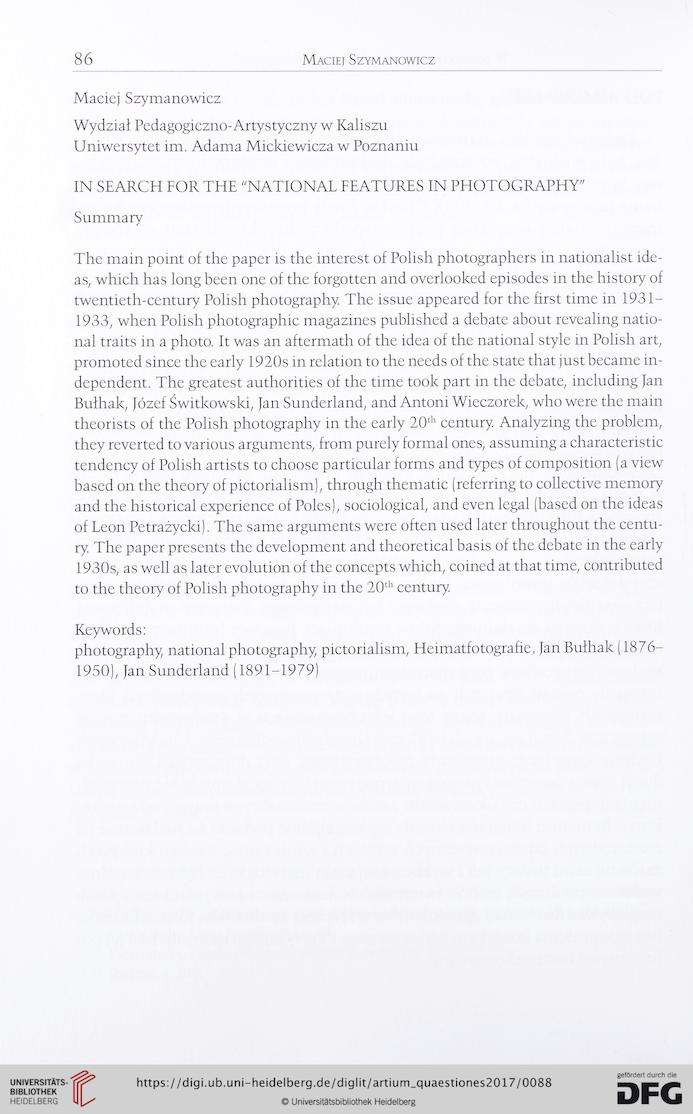 Maciej Szymanowicz
Wydział Pedagogiczno-Artystyczny w Kaliszu
Uniwersytet im. Adama Mickiewicza w Poznaniu
IN SEARCH FOR THE "NATIONAL FEATURES IN PHOTOGRAPHY"
Summary
The main point of the paper is the interest of Polish photographers in nationalist ide-
as, which has long been one of the forgotten and overlooked episodes in the history of
twentieth-century Polish photography The issue appeared for the Erst time in 1931—
1933, when Polish photographic magazines published a debate about revealing natio-
nal traits in a photo. It was an aftermath of the idea of the national style in Polish art,
promoted since the early 1920s in relation to the needs of the state that just became in-
dependent. The greatest authorities of the time took part in the debate, including Jan
Bułhak, Józef ŚWitkowski, Jan Sunderland, and Antoni Wieczorek, who were the main
theorists of the Polish photography in the early 20th century Analyzing the problem,
they reverted to various arguments, from purely formal ones, assuming a characteristic
tendency of Polish artists to choose particular forms and types of composition (a view
based on the theory of pictorialism), through thematic (referring to collective memory
and the historical experience of Poles), sociological, and even legal (based on the ideas
of Leon Petrażycki). The same arguments were often used later throughout the centu-
ry. The paper presents the development and theoretical basis of the debate in the early
1930s, as well as later evolution of the concepts which, coined at that time, contributed
to the theory of Polish photography in the 20th century
Keywords:
photography, national photography, pictorialism, Heimatfotografie, Jan Bułhak (1876-
1950), Jan Sunderland ( 1891—1979)